The Corporation for Public Broadcasting Is Hardly 'Public' 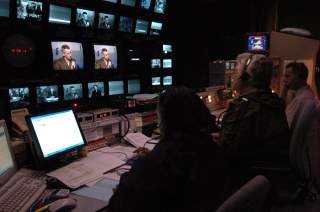 Referring to the Declaration of Independence and the Constitution of the United States in “A More American Conservatism,” Larry P. Arnn, President of Hillsdale College, rightly observes that “today the authority of these two documents is in obvious decline for obvious reasons. In the academy they are rejected as obsolete or evil, and this opinion spreads throughout the talking classes, most everywhere in education, journalism, and entertainment.”

One of the most insidious agents in President Arnn’s “talking classes” is the Corporation for Public Broadcasting, which oxymoronically refers to itself as “A Private Corporation Funded by the American People.” The CPB spreads the rejection of America’s founding principles through PBS, NPR and the CPB’s more than 1,500 local public radio and television affiliates.

What’s in a Name?

If the name is not pretentious enough, think about the presentation style of the anchors and reporters on both PBS and NPR. Elitism saturated in serious tones spoken in three-quarter speed to create gravitas where none actually exists. ’Nuff said.

Moving to substance, consider the second word in the CPB’s name. Would it not be intellectually more accurate, when referring to this entity, to place the word Public in quotes? Why? Because it is not in the American public interest, as originally defined in America’s founding documents (i.e., to preserve individual liberty), to promote a point of view that is anathema to individual liberty. Better yet, it might be more accurate to replace the word “Public” with the word “Progressive.” That word sums up perfectly the point of view promoted by, and the apparent mission of, the CPB—i.e., to advance progressivism, the ideology of “soft” collectivism (otherwise known as Fabian Socialism), the antithesis of America’s founding principles.

Of course, America’s founding documents recognize that the preservation, or “conservation,” of liberty (the very essence of American conservatism) goes hand in hand with freedom of the press. Accordingly, the CPB, like any American institution, should enjoy free speech, but with one caveat: that its speech be sponsored by the free market, not by American taxpayers, many of whom have points of view diametrically opposed to those promoted by “progressive” public broadcasting.

Progressive CPB proponents (are there any other kind?) love to point out that the majority of funds spent by the 1,123 public radio stations and 366 public TV stations subsidized by the CPB comes from sources other than the federal government. Although true, that fact proves nothing. So long as the CPB receives federal appropriations of over $400 million per year (e.g., $445 million in 2016, $444.75 million in 2015 and $445 million in 2014), funds coerced from the pockets of taxpayers by the power of government, with which to subsidize local public radio and public TV, it is, by definition, not a free-market institution. Hence, it should not have the right freely to use its resources to promote any point of view. Freedom of speech cannot be born in coercion.

Of course, it is nearly impossible for a human being to communicate either in a radio broadcast or in a TV broadcast without promoting, either textually or subtextually, a point of view. This is true even when simply announcing the scores of baseball games. Accordingly, the only real way to avoid the CPB’s, and its minions’, promotion of the “progressive” point of view (or maybe someday a different point of view) at the taxpayers’ expense is to cease federal funding of CPB. V. I. Lenin famously stated: “The Capitalists will sell us the rope with which we will hang them.” In the case of the CPB, Congress has not even been paid for the rope. It has been providing the hangman’s rope for free.

CPB, while denying any actual progressive bias, will admit that it recognizes the possibility of bias. To prevent the unpreventable, the CPB proudly proclaims that it has installed an “ombudsman.” The current ombudsman, Milton Coleman, is described by the CPB as “an independent observer of public broadcasting and its adherence to the highest standards of journalistic integrity regarding accuracy, transparency, balance and objectivity, as well as diversity and taste.” The CPB also claims that Coleman “decides on his . . . own which programming and broadcasts are reviewed and what reports are made.”

Any critical thinker then must ask: How do we know that Coleman (whose previous jobs included, among others, stints at the African World newspaper in Greensboro, North Carolina; the All-African News Service; WHUR-FM News at Howard University; and the Washington Post), or any ombudsman, can ensure “balance and objectivity”? Although Fox News claims to be “fair and balanced,” half the country’s inhabitants believe that proclamation is, at best, laughable.

But the critical difference between Fox and the CPB is that Fox is a corporation that receives no subsidies from the government. It must survive in the free market by attracting an audience and commercial sponsors. It must generate sufficient income, without government help, and after paying the U.S. corporate income tax (which, in the case of Fox, was $979 million in 2015, and which, as should come as no surprise, is not an obligation of the nonprofit CPB), to stay in business. If the opponents of Fox, which are legion (including the sitting president of the United States and nearly every Democrat in Congress), can convince enough viewers that Fox cannot be trusted, Fox (which maybe should be known as “The Corporation That Gave America Megyn Kelly”) will lose its commercial sponsors. As a result, Fox’s “fair and balanced” news will blink off into oblivion.

Not so with the CPB. No matter how many Americans complain about progressive bias in public radio and public television, subsidized by the CPB with money coerced from taxpayers, those outlets, at least historically, have been insulated from the crucible of the free market while continuing to promote their biased agenda. Who can forget LeVar Burton’s defense of Big Bird, calling Mitt Romney’s plan, announced in a 2012 presidential debate, to defund PBS “an attack on children”? We all know how that ended (with respect to the fate of both Big Bird and Mitt). In the inimitable words of Harry Reid, “Romney didn’t win, did he?” But Big Bird kept his nest well feathered, at taxpayer expense. (In fact, Congress appropriated $444.16 million for the CPB in 2012, and $421.86 million in 2013.)

Perhaps the 2017 Republican majorities in both the House and the Senate, backed by a new President, one whose campaign was built on relentlessly attacking “the dishonest media,” finally will find the political courage to end government funding of the intellectual tyranny of public broadcasting. Then we will see if progressives deign to use their own money, instead of funds coerced from others, to keep public broadcasting functioning. But with the New York Times, the Washington Post, CNN, ABC, CBS and NBC all sharing the same progressive agenda, it is a good bet that public broadcasting will blink off the air, a casualty of economic reality and a finally free market in news and broadcasting. Good riddance. Perhaps Mr. Trump will ask Congress to redirect the $445 million per year to pay for the construction of “the wall.” The $10 billion price tag for “the wall” (before any “Art of the Deal” discount) could easily be amortized over the life of the edifice by reprogramming the current and future CPB appropriations. That’s like getting Trump’s wall for free, not to mention the free market in media that will follow and the end to free healthcare for new illegal immigrants, as well as the freeing up of school budgets in border communities.

Does terminating the CPB’s government funding mean that all programming appearing on subsidized stations will go dark? Not at all. The free market will decide which ones will live on, in a commercial setting. After all, the Muppets did make the jump from public television to ABC, but, after one season, their ratings declined, and they were canceled. The free market in action.