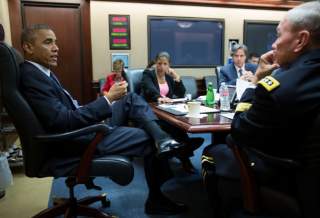 Last Tuesday’s Washington Post featured an op-ed by Senator Bob Corker (R-Tenn) blasting President Obama for his shaky support for those we are helping in Syria, Libya and Ukraine. Corker worries that the president’s unreliability undermines U.S. credibility to defend U.S. partners and allies everywhere.

It’s true; President Obama offers far more rhetorical than actual support for his preferred side in those conflicts. Pretty much everything else in the op-ed is wrong. Because Corker’s argument is so common in Washington, especially in the Post, yet theoretically confused and historically bunk, it’s worth occasionally refuting.

The basic reason Corker is wrong is that talk is cheap, and everyone knows it. In U.S. foreign policy, presidents typically drum up support for even minor actions with soaring talk about its strategic and moral importance. But most people, especially statesmen, understand that interests vary across time and circumstances, even if rhetoric is similar. Historical studies show that leaders deciding whether to defy foreign threats focus on the balance of military power and the material interests of the threatening state, not on its opponent’s record of carrying out past threats. Credibility doesn’t travel well.

That is why the domino theory was wrong. Neither the West Europeans we were defending during the Cold War, nor their Warsaw Pact adversaries believed that U.S. withdrawal in Vietnam would mean U.S. abandonment of Europe’s defense. The same goes for other U.S. military actions in the last several decades that ended badly—for example, the Marine deployment to Lebanon under President Reagan and the recent war in Iraq. Presidents initially offered big talk about goals. Later, we quit without having reached those goals. Contrary to claims of credibility hawks, other U.S. allies did not lose faith in American military power or come under attack from emboldened foes. Instead, new supplicants continued to ask for our help. Often, when it was not forthcoming, or too limited for U.S. hawks, they insisted that we would lose credibility if we did not do more. They always proved wrong.

Corker’s argument is also contradictory. If U.S. credibility is as fragile as Corker’s argument suggests, we should avoid extending it profligately. Because our limited interests in most places prevent us from sustaining a military effort, we aren’t likely to achieve our stated goals. So we will lose credibility by getting involved at all. Credibility hawks’ own logic suggests that they should have opposed U.S. intervention in Vietnam, because failure would upset our position in Berlin.

Similarly, if Corker is so worried about U.S. credibility, he should caution against tying our reputation to the fate of Ukraine’s shoddy military or Middle Eastern rebels. And if he does advocate force, he should make sure it’s decisive. Yet to help Ukraine, he suggests just tougher sanctions on Russia. In Syria, Corker would provide more aid to “moderate” Syrian rebels, but does not suggest bombing to help them. In Libya, he complains that the administration has done too little to support state formation, but suggests doing nothing different.

In each case, Corker’s preferred actions are unlikely to accomplish much more than the White House’s. And those actions, having failed, would exacerbate the supposed credibility problem that so concerns him. His logic would then suggest upping the ante to avoid losing face elsewhere. Given that the Senator wants neither to avoid these entanglements entirely, nor to use direct force, he doesn’t seem to take his own argument seriously.

Credibility rationales for foreign policy attach peripheral interests to important ones. For that reason, they tend to justify participation in wars we should avoid. A good rule of thumb for foreign policy is that if someone tells you our credibility depends on doing something, it’s probably a bad idea.