The Crisis in Ferguson Meets Libertarianism 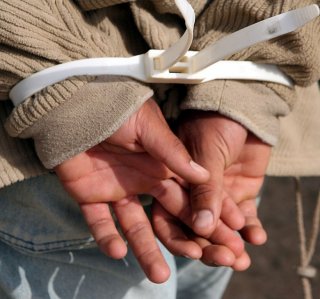 Since Robert Draper’s provocative New York Times piece posed the question, national pundits have been consumed by whether the country is experiencing a “libertarian moment.” Their answers have varied, largely based on what they think about libertarianism themselves.

If anywhere in America could use a libertarian moment, it is Ferguson, Missouri. That’s where Michael Brown, an eighteen-year-old, unarmed black man, was shot to death by the police. Since then, all hell has broken loose.

The police claim Brown was going for the officer’s gun. One eyewitness said all Brown did was instinctively pull away when the officer grabbed him by the throat. Some accounts have Brown running down the street with his hands up as he was shot.

Ferguson apparently doesn’t equip its police cruisers with dashboard cameras, so the facts remain in doubt. Police officers deserve as much of a legal presumption of innocence as any other American citizen; perhaps he is telling the truth.

What is beyond dispute is that since Ferguson erupted in response to this tragic incident, the authorities haven’t done much to instill public confidence. Not only have they declined to release relevant details, much like the police officer in question is accused of doing, they have escalated the situation very quickly by engaging in a series of clashes with understandably upset demonstrators.

Many in Ferguson’s black community feel Brown was at best a victim of wildly disproportionate force, at worst summarily executed at least in part because of his race. So how have the police responded? With tanks, armored vehicles, rubber bullets and tear gas—a show of force redolent of a Third World dictatorship suppressing a popular revolt. Observers have pointed out that they look more like an occupying power than a police force paid to serve and protect the community.

One journalist on the scene reported that as the police confronted a group of protesters, they hilariously blared through a loudspeaker: “Your right to assembly is not being denied.” No such luck for the freedom of the press. Two national reporters covering the story—one white, one black—were detained at a local McDonald’s. They were released with no charges filed and no explanations given.

Another reporter claimed that as he attempted to take a picture, a deputy protested, “We’re dealing with 4,000 animals in there and you want to give us attitude?”

None of this is to suggest that all the demonstrations have been peaceful. There have been riots and looting. Robbing a liquor store won’t save a future Michael Brown and it is hardly an act of bona fide political protest. Such rioting has in the past caused long-term damage to black neighborhoods and businesses.

What does libertarianism have to do with any of this? Well, for one, libertarians have been warning about the consequences of militarizing domestic law enforcement for quite some time. Among the most prominent examples is Radley Balko, now with the Washington Post, but formerly of such quintessentially libertarian institutions as Reason magazine and the Cato Institute. Balko’s The Rise of the Warrior Cop predicted the problems that can occur when local police officers begin to resemble ground troops.

Second, libertarians have protested many of the policies that have led to the criminalization of everyday life for too large a segment of the black community. This includes the failed federal war on drugs and the disparate sentencing guidelines that are its major outgrowth.

Third, this situation calls for a political force that will defend the Bill of Rights, rather than practice identity politics. That means ensuring that peaceful property owners are free of looters and law-abiding demonstrators are not crushed by SWAT teams. It also means taking an appropriately skeptical view of both police claims and Al Sharpton.

Oddly, one of Balko’s Post colleagues doesn’t seem to think libertarians have much to say about Ferguson at all. (His examples are two libertarian-leaning Republican lawmakers and John Stossel; Rand Paul has since weighed in.) Yet they are precisely the people who have routinely protested the idea of governments equipping law enforcement with armored vehicles but not dash cams.

If libertarians and the best kind of conservative have any insight, it is this: government works for the people whose tax dollars sustain and support it, not the other way around. When this basic order of things gets reversed, Ferguson isn’t too far around the corner.

The St. Louis County police chief has been quoted as saying, “I understand that the public has a right to be skeptical, and I appreciate that and I would expect that the public be skeptical oftentimes of government or some forms of it.” This is a good example of why.