The Cruise Missile Could Be Mattis's Nuclear Crisis 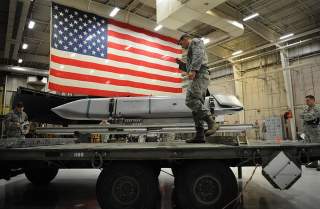 During his January 12 Senate confirmation hearing, new Defense Secretary James Mattis was asked if he would support the Obama administration’s trillion-dollar plan to rebuild the U.S. nuclear arsenal over the next few decades. One would have expected General Mattis to say the safe thing as a Republican nominee testifying before a Republican-led Senate Armed Services Committee, but his answer was surprising.

Mattis, who was just confirmed today, offered his general support for each aspect of the nuclear program: the Columbia-class submarine, the B-21 bomber and even a new long-range ballistic missile. But when it came to the proposed nuclear-armed cruise missile, known as the Long-Range Standoff weapon, he paused and said, “I need to look at that one.”

“My going in position is that it makes sense, but I have to look at it in terms of its deterrence capability,” Mattis told the Senate.

His written answer on the cruise missile was even more cautious: “I will carefully examine the utility and advisability of this program within existing nuclear doctrine and report back to the Committee with an informed answer.”

Why is General Mattis hedging his bets on the cruise missile? Maybe he can see the writing on the wall: the Pentagon is unlikely to be able to afford all the new weapons it wants to buy. Additionally, the case for the nuclear cruise missile—expected to cost at least $20 billion—is weak. Also, the program has some powerful opponents. No point in sticking your neck out for the slowest zebra in the herd.

Especially since Mattis’s boss is saying he thinks nuclear weapons should be greatly reduced.

Indeed, the cruise missile has drawn more opposition than any other part of the nuclear plan, and the list of critics is steadily growing. In 2015, former secretary of defense William Perry and former assistant secretary Andy Weber wrote that the weapon should be killed. They argued that nuclear cruise missiles were destabilizing since they could be “launched without warning and come in both nuclear and conventional variants.” In fact, Britain recently decided not to build a similar weapon because other nation-states would have no way of knowing whether the country had launched a conventional cruise missile or one with a nuclear warhead. The inability to discern which weapon was being used could trigger a nuclear war, according to Britain’s Chancellor of the Exchequer Philip Hammond.

Perry, who has worked closely with Mattis, is a giant among defense intellectuals and the father of the first nuclear cruise missile, which he developed while at the Pentagon in the Carter administration. Now, Perry believes that the refurbished B61 nuclear bomb makes it possible for the defense department to maintain an effective nuclear-armed bomber force without a nuclear cruise missile.

Heavyweights in Congress also oppose the nuclear cruise missile. In November, Sen. Dianne Feinstein, ranking member of a key appropriations subcommittee, and Rep. Adam Smith, ranking member of the House Armed Services Committee, wrote a joint essay. The essay argued that the weapon was unnecessary, “incredibly expensive and would move the United States closer to actually using a nuclear weapon — an unthinkable action.”

Feinstein and Smith argued that it would be far wiser to invest in conventional standoff capabilities, such as the Air Force’s Joint Air-to-Surface Standoff Missile and the Navy’s Tomahawk cruise missile.

While the cruise missile has attracted the most attention, there is no consensus among Democrats that President Obama’s trillion-dollar nuclear plan is a good idea. Last summer, ten Democratic senators wrote a letter to the president that called on him to “scale back plans to construct unneeded new nuclear weapons and delivery systems.” A similar letter from House members warned that the nuclear plan was “neither affordable, executable, nor advisable.”

Moreover, the 2016 Democratic Party platform states that the party will work toward reducing excessive spending on nuclear-weapons-related programs.

Now that Obama’s nuclear refresh plan belongs to the Trump administration, Mattis would be wise to hold it at arm’s length. Trump has said that he wants to spend additional billions to “rebuild” the U.S. conventional military as well as $1 trillion on new infrastructure projects. This money will have to come from somewhere.

But where? The expensive, redundant and dangerous nuclear cruise missile is a great place to start.

Tom Z. Collina is the Director of Policy at Ploughshares Fund, and global security foundation in Washington DC.