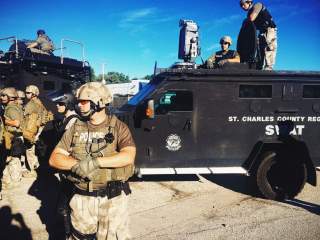 1968 IS BACK. A growing chorus of voices on the right is arguing that the riots in Baltimore and Ferguson are ushering in a new round of the culture wars. On the website Breitbart, for example, Robert W. Patterson, a former George W. Bush administration official, wrote, “The Grand Old Party must decide: Go libertarian, and sympathize with the protesters and rioters? Or does it want to be conservative, and side with the police, the rule of law, and the forces of order? The lessons of the 1960s suggest the latter is the path to victory.” William Kristol, editor of the neoconservative Weekly Standard, observed during the recent riots in Ferguson, “It does feel like a Nixon ’68 moment. Who will speak for the Silent Majority?”

It was a revealing question. In 1968, Richard Nixon tapped into white working-class antipathy toward student and black radicalism to defeat Hubert Humphrey. The Southern Strategy was born. Two years earlier, Ronald Reagan had won election as governor of California by denouncing the Free Speech Movement at Berkeley and promising to “throw the bums off welfare.” Reagan would go on to midwife what became a potent alliance between the emerging neoconservative movement and traditional conservatives. The neocons began to share the traditionalists’ belief that, as Burke put it, “Men of intemperate mind can never be free. Their passions forge their fetters.”

The maiden neocons had themselves emerged from the intensely partisan milieu of the 1930s to become respected public intellectuals. They viewed the scaturient passions of the New Left that had suddenly emerged in the 1960s as a clear and present danger—what the literary critic Lionel Trilling deemed an “adversary culture.”

Irving Kristol, Gertrude Himmelfarb and a number of other neoconservatives were deeply influenced by Trilling’s criticism of liberalism from inside the movement. They were also influenced—Kristol and Himmelfarb in particular—by the political philosopher Leo Strauss, who had fled Nazi Germany. Strauss believed that the culprit for much of what had gone wrong in Western civilization could be traced back to Machiavelli, who had lowered man’s sights away from a transcendent good. The result was the rise of relativism, in which one view of how humans should behave is as good as another. Strauss, by contrast, promulgated a different message, one that resonated with the new generation of conservatives—a return, after centuries of neglect, to classical virtue.

Kristol assailed what he called a “new class” of managers, lawyers, bureaucrats and social workers who promoted new issues such as women’s rights, sexual liberation and minority rights. Himmelfarb’s numerous books lauded the idea of Victorian virtue, stressed self-help and charity, and argued that the public dole had profoundly corrosive moral effects, foremost among them creating a culture of dependency on government.

Though it has tended to be scanted in recent years, neoconservatives—“Liberals mugged by reality,” as Kristol once put it—were initially much less preoccupied with foreign than domestic issues. Domestic policy is where they made their bones. Kristol and Daniel Bell founded the Public Interest in 1965 (though Bell ended up resigning as coeditor in 1973). The National Interest didn’t appear until 1985, just as the Cold War was beginning to reach its terminal phase. Political scientist James Q. Wilson, a regular contributor to Commentary and the Public Interest, devised the “broken windows” theory, which holds that stopping petty crimes is a vital step toward preventing major ones from occurring.

RIOTING IN the inner cities in 1968, the disintegration of New York City, the rise of black militants and the introduction of affirmative action hardened neocon attitudes. Nathan Glazer called affirmative action “affirmative discrimination.” In 1965, Daniel Patrick Moynihan issued a report warning about the collapse of the black family. Two years later, he delivered a speech to the Americans for Democratic Action stating that “liberals must somehow overcome the curious condescension that takes the form of defending and explaining away everything, however outrageous, which Negroes, individually or collectively, might do.” Other neocons blamed a new antinomianism for America’s ills. The emphasis on individual needs and wants—feminism, multiculturalism and the like—meant that the idea of a common civic good was disappearing. In their view, it was being replaced by a society of disgruntled supplicants.

Neocon apprehensions about crime and the sexual revolution were also acutely reflected in literary form. In novels like Mr. Sammler’s Planet and The Dean’s December, Saul Bellow vividly evoked the racial tensions of the 1970s, prompting charges that he was himself a racist. The Dean’s December focuses on the murder of a white graduate student named Rick Lester by a black hoodlum and a female prostitute. The protagonist Alfred Corde, a dean at the University of Chicago, registers his sympathy with the underclass but suggests that the basic problem is insoluble:

We do not know how to approach this population. We haven’t even conceived that reaching it may be a problem. So there’s nothing but death before it. Maybe we’ve already made our decision. Those that can be advanced into the middle class, let them be advanced. The rest? Well, we do our best by them. We don’t have to do any more. They kill some of us. Mostly they kill themselves.

The next shot in the culture wars came with Allan Bloom’s 1987 book The Closing of the American Mind (to which Bellow contributed a foreword). Bloom assailed feminism, black power and affirmative action, among other things, to argue that the 1960s were, more or less, the culprit for everything that had gone wrong at major universities. Now, a provocative new book, The State of the American Mind, edited by Mark Bauerlein and Adam Bellow, offers an updated look at American culture, or what often passes for it. R. R. Reno, the editor of First Things, contends that already in middle school teachers catechize their young charges to be nonjudgmental:

We’re now trained to counter the slightest hint of judgment with deflationary gestures: “Speaking as I do from a white, privileged, first-world perspective,” and so on. It is forbidden to forbid, and our moral judgments need to be transformed into their true meaning, that is, expressions of class bias, historical circumstances, or (best of all) personal preferences.

Greg Lukianoff, the president of the Foundation for Individual Rights in Education, examines the transition that he believes has taken place on the left, from the 1960s emphasis on free speech to the conviction that hard-nosed controversy constitutes a threat to the emotional health of students. “We have passed from a campus climate in which being able to handle robust, meaty, and sometimes harsh debate and discussion was regarded as a precondition of genuine learning and maturation,” he says, “to one in which it is too often seen as a violation properly suppressed before it even happens.”

NEOCONS AND conservatives are now suggesting that a fresh wave of political correctness also characterizes the liberal response to the tumult in Baltimore and Ferguson. Jonathan Tobin, senior online editor of Commentary, recently wrote, “The idea that calling rioters ‘thugs’ is evidence of racism shows how far the discussion of race has been debased by a debilitating political correctness.”

Other, older neocon themes are also resurfacing. For example, New York Post columnist Michael Goodwin declared that New York mayor Bill de Blasio needed to embrace the “broken windows” theory of policing or face a potential civic breakdown: “Baltimore should be his wake-up call. It shows that handcuffing the cops ultimately leads to more violence and crime, not less, and ends up with the National Guard patrolling the streets like a war zone.” Above all, conservatives are pointing to the issue of morality to suggest that a broken culture is responsible for the dismal state of cities like Baltimore.

In commenting on such stands, Frank Rich recently observed in New York magazine that the GOP could seek to profit politically from law-and-order issues to “drive a wedge between Hillary Clinton and those white Democratic and independent voters who defected from Obama but who might be inclined to vote for her.” When it comes to these issues, however, leading Republican politicians are punting. Speaker of the House John Boehner, for example, is backing more federal grant money for body cameras for police officers and said that if the charges against the six Baltimore police officers in the Freddie Gray case are true, “It’s outrageous, and it’s unacceptable.” It’s hard to avoid the impression that Republicans in general often create much ado about nothing, but are afraid to tackle vexing policy issues directly. So far, the GOP has neither shown an appetite for rediscovering Nixon and 1968 nor explained how it could successfully reinvent itself as a new party. A party that does not understand itself is not a party that can make itself understood to the electorate.