The Danger of Mission Creep in Syria 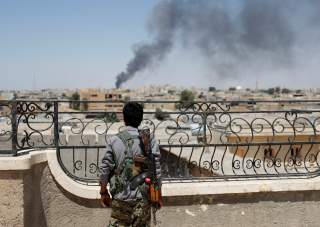 On Sunday, a U.S. Navy fighter jet shot down one of Bashar al-Assad’s warplanes attacking U.S.-allied Syrian forces, drawing the United States deeper into that conflict. Raising tensions with Russia and potentially placing American troops in danger, this action was just another in a long line of tactical decisions which increase U.S. involvement in Syria without any viable long-term strategy for resolving or exiting the civil war.

Much of the criticism has focused on President Donald Trump’s impulsive and pugnacious personality. While Trump has accelerated this process, he is not wholly to blame for the slippery slope that the United States is now sliding down in Syria. The Obama administration resisted large-scale escalation, but their choices nonetheless contributed directly to today’s haphazard Syria strategy. The Trump administration needs to decide what it wants to achieve in Syria now, or the inevitable logic of mission creep may rob them of the ability to choose.

A common narrative among hawks in Washington is that Barack Obama’s failure to escalate in Syria—most notably his decision not to follow through on his “red line” comments about chemical weapons—reduced U.S. credibility and worsened the conflict there. These criticisms are largely unjustified: the red line comment may have been foolish, but the Russian-brokered chemical weapons deal succeeded in preventing the further use of chemical weapons during Obama’s term, and was likely more effective than air strikes would have been.

Obama does deserve some credit for his willingness to avoid large-scale escalation against the Assad regime in Syria in 2013 and again in response to Russia’s 2015 intervention. Whether he feared a repeat of the 2011 Libya intervention—where narrow humanitarian goals quickly and almost seamlessly transitioned into regime change—or he simply acknowledged the complexity of the Syrian conflict, the former president repeatedly resisted pressure to commit U.S. forces against Damascus.

Yet his administration did get involved in other ways, recognizing the Syrian opposition in 2012, and later supplying arms and training to anti-Assad rebels. Meanwhile, the campaign against ISIS was characterized by mission creep. Initially portrayed as air strikes in support of local forces, Operation Inherent Resolve quickly saw the deployment of troops in both Iraq and Syria: as early as May 2015, U.S. Special Forces were engaging in ground raids against ISIS, and by May 2016, they were fighting alongside Syrian rebels to take the town of al-Shaddadi.

To support these missions, the United States helped to seize and expand an airfield near Kobane in northern Syria, staffing it with civil engineers, intelligence and support personnel. By the time Obama left office, the United States had 500 Special Forces personnel on the ground in Syria in addition to support staff. This gradual escalation went largely unnoticed at the time, with U.S. forces often seemingly “plugged-in” to fill a temporary gap in local partner capacity.

Indeed, Obama never appeared to have a good strategy for the endgame. As long as the fighting in Syria’s civil war stayed geographically segregated from the campaign against ISIS, both could proceed without raising difficult questions about territorial control. Perhaps the biggest problem with the administration’s Syria policy was its failure to more aggressively pursue the diplomatic steps that could have begun the peace process. Rather than admitting America’s limited strategic interests in the Syrian conflict, ambivalence and gradual escalation ultimately laid the groundwork for Trump’s more impulsive escalations.

If Obama’s involvement in Syria could be characterized as “creeping escalation,” Trump appears to be sprinting towards heavier involvement in the conflict. In his first months in office, the new president authorized substantial new deployments—almost doubling the number of Special Forces in Syria—and has begun to deploy conventional forces too, sending around 400 marines to establish fire bases in northern Syria.

Trump has also proved far less willing to draw a clear line of distinction between ISIS and militias associated with the Assad regime. In April, in response to a chemical-weapons attack, Trump authorized a tomahawk missile strike on a Syrian air base. Since that time, U.S. troops have struck Assad-linked militias several times, bombing convoys and drones that entered into the exclusion zone near the U.S. base at al-Tanf.

This increase in incidents inside Syria is the inevitable result of Trump’s choice to speed up the fight against ISIS. Since weaknesses in local partners can no longer be built-up slowly, U.S. forces are needed instead to provide required capacity (such as recently deployed marine artillery units) in key areas. This then produces new problems for force protection: recent strikes on regime-allied forces are largely aimed at protecting U.S. and allied forces. As U.S.-backed and regime-backed forces come into contact more frequently, these tensions will only grow.

Worryingly, unlike the Obama administration, Trump’s approach to Syria does not appear to be driven by a coherent strategy. Though far from perfect, Obama’s slow-and-steady approach to the anti-ISIS campaign, coupled with a concerted international diplomatic effort, had the potential to yield a substantive rollback of ISIS and at least a managed ceasefire process in the rest of Syria. But in rushing the end of the campaign, substituting U.S. forces for local ones, and effectively ignoring diplomacy, the new administration is merely increasing the chaos in Syria.

Worse, the Trump administration is reportedly considering using its involvement in Syria to push back on Iran, a step that will increase the risks to U.S. troops in Syria and Iraq while producing no obvious policy benefits. Aside from ISIS, the United States has never had strong interests in the Syrian conflict; in contrast, Iran, Russia and the Assad regime are all heavily invested in the outcome of the conflict.

Indeed, the recent mission creep in Syria effectively refutes the long-running hawkish position on Syria which argued that targeted strikes would force other actors to take a more conciliatory approach to ending the conflict. Trump’s missile strikes have not stopped the Assad regime’s attacks on civilians, and militias continue to probe U.S.-associated forces on the ground—even after the recent strikes. The recent shootdown is of particular concern, as it highlights that the Trump administration is willing to retaliate for attacks on local partners, not just for direct attacks on U.S. forces.

With neither side willing to back down in Syria, the potential for further escalation is high. Trump is accelerating fast, but with no clear goal in sight. The White House needs a coherent Syria strategy soon, before events spiral even further out of its control.

Emma Ashford is a research fellow in defense and foreign policy studies at the Cato Institute.

Image: A Kurdish fighter from the People's Protection Units (YPG) looks at a smoke after an coalition air strike in Raqqa​.