The Dangers of Ignoring Yemen 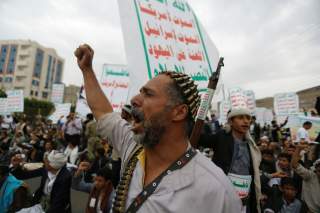 In the weeks following President Trump’s first State of the Union speech, much has been written about the topics on which the president chose to speak. However, one topic of concern that noticeably received no mention during the speech was Yemen, a country in which the United States has carried out several military operations yearly since 2010. While the Trump administration criticized Saudi Arabia for blockading Yemeni ports in December 2017, the White House has been otherwise silent regarding the damage inflicted by the Saudis on civilian targets during Yemen’s ongoing civil war. Additionally, the United States has consistently provided assistance enabling Saudi Arabia’s sustained military operations in Yemen. Instead of remaining silently compliant towards the bulk of Saudi Arabia’s mistakes in Yemen, the United States should utilize its considerable sway with the Saudis to convince them to take the necessary precautions to minimize the impact of their bombing campaign on Yemen’s civilian population, which risks further exacerbating the existing civil conflict.

While Yemen’s civil war initially began in 2014 as a struggle between the government of Yemeni president Abdrabbuh Mansur Hadi and the Houthi rebels, the list of combatants quickly grew to include participants outside of Yemen’s borders. The fall of Hadi’s government in Sana'a prompted the entrance of a ten-nation coalition led by Saudi Arabia into the conflict to help Hadi reassert control over the fractured country. Given their desire for stability on their southern border, opposition to the Iranian-backed Houthis, and clear preference for Hadi’s Sunni rule over that of the predominantly Zaydi Shia Houthis, Saudi Arabia’s decision to intervene on behalf of Yemen’s beleaguered president was hardly a surprise to observers of the region’s politics.

The United States’ choice to provide support for both the Saudi-led coalition and the Hadi government was equally unsurprising. Saudi Arabia has long been considered among America’s most trusted and important allies in the Middle East due to its significant petroleum exports, strong regional military presence, and willingness to align with America in joint efforts to stymie Iran’s bid for hegemony in the Persian Gulf. Additionally, both Saudi Arabia and the United States have a vested interest in preventing a Houthi victory in Yemen, which would allow Iran to exercise undue influence in the Gulf and would allow them to threaten Saudi Arabia from their southern border. Because of these interests, America’s support for the coalition has increased under the Trump administration, as noted by the approval of a $110 billion arms deal to Saudi Arabia and an increase in American efforts to refuel Saudi planes to enable their attacks on Yemeni rebels.

While the establishment of peace in Yemen under Hadi’s leadership is in the best interest of the United States, the collateral damage that Saudi Arabia has inflicted on the war-torn country is a serious cause for concern. Nearly three hundred Yemeni civilians were killed by Saudi airstrikes in December 2017 alone, while the recently-ended Saudi blockade of Yemen’s Houthi-controlled ports left seven million Yemenis on the brink of famine. Saudi Arabia killed 140 civilians during a single airstrike in 2016 after it mistook a funeral for a gathering of Houthi leaders. Despite offers by the Obama administration to help Saudi Arabia minimize their civilian casualties by improving the accuracy of strikes and thoroughly investigating the conditions that enabled previous mistakes, the Saudi military leadership showed little willingness to alter its tactics on its own accord.

There is also mounting evidence that Saudi Arabia has deliberately targeted civilian infrastructure to manufacture a food insecurity crisis in Yemen’s Houthi-controlled areas. Hundreds of airstrikes have purposefully targeted farms, marketplaces and food-storage facilities, while over two hundred fishing ships have been destroyed in coalition bombings. While Saudi Arabia did lift its blockade in December after receiving significant pressure from the United States and the international community, many ports have been rendered nearly unusable by previous coalition attacks, resulting in significant delays in the delivery of essential food and medical supplies to Yemen’s beleaguered populace. Yemen held the pitiable label of the most impoverished Middle Eastern nation even before the outbreak of civil war, and the Saudi strategy of starving the Houthis into submission has left Yemen among the most food-insecure nations on Earth without bringing the conflict any closer to an end.

Unfortunately, the negative ramifications of Saudi Arabia’s actions in Yemen go beyond the considerable humanitarian concerns. Al Qaeda, which has long had a significant presence in Yemen, has seen its influence grow over the course of the civil war, a period during which Saudi Arabia has focused nearly all its military efforts on attacking the Houthis at the expense of targeting the terrorist organization. Al Qaeda was significantly bolstered by the transfer of weapons from Saudi Arabia to a number of Al Qaeda-affiliated Sunni militia groups in Yemen, which naturally resulted in the diffusion of many of those weapons into the hands of the group’s operatives. Furthermore, the aggressive tactics of the Saudi military has led many Yemenis to view the Saudis as a destabilizing colonial force within their country, which has enabled Al Qaeda to bolster its recruitment on the Arabian Peninsula. The longer the conflict drags on and the more damage is inflicted upon civilian populations by the Saudis, the greater the risk of Al Qaeda re-establishing and expanding its foothold on the peninsula becomes.

Additionally, for all the destruction it has caused, the Saudi intervention in Yemen has created very little positive momentum towards ending the conflict. Nearly three years into the Saudi campaign, Yemen is more divided now than it was when the coalition entered the conflict, as evidenced by the recent outbreak of violence in the city of Aden between various groups who had ostensibly been allies on the side of the coalition. Even after their break with the supporters of the recently deceased former president Ali Abdullah Saleh, the Houthis have shown no signs that they are close to defeat, and the government’s push to reclaim the Houthi-controlled capital of Sana'a has largely been stalled. As the international community rallies in support of the upcoming peace talks to be held in Oman, the Houthis seem to be just as empowered as they have been during previous failed attempts at dialogue between the combatants.

In the interest of preventing Yemen’s further descent into chaos, the United States should begin consistently applying both public and private pressure on the government of Saudi Arabia to adjust their military tactics in Yemen. The United States is not likely to convince Saudi Arabia to abandon their campaign entirely, nor is it necessarily in the best interest of either country for them to do so. However, Saudi Arabia has shown some willingness to respond to public pressure on this issue in the past, as evidenced by their acquiescence to sustained public calls by the United States for an end to their blockade in December.

Furthermore, the United States has significant leverage over Saudi Arabia that it could use to influence the kingdom’s behavior. American assistance in refueling Saudi planes has allowed them to partake in longer, more ambitious aerial assaults in which the Saudi air force uses American-made missiles to attack their targets. Conditioning the continuation of such support upon a change of tactics meant to minimize the damage to civilian targets would give Saudi Arabia a significant incentive to alter its behavior, as the Saudis would find it substantially more difficult to carry out their coalition’s campaign with diminished American support.

Finally, the recent tensions between Saudi Arabia and their leading coalition ally, the UAE, regarding the desired end of the conflict presents the perfect opportunity for the Trump administration to meaningfully engage the Saudis on a change in tactics. Between the Saudi support for Yemen’s Muslim Brotherhood-affiliated al-Islah party to the UAE’s arming of the southern secessionist movement that attacked government forces in Aden in early February, it has become increasingly clear that the coalition’s most prominent members have little in common in regards to Yemen beyond their mutual distaste of the Houthis and fear of creeping Iranian influence. Present circumstances have left Saudi Arabia more desperate than ever for stable allies in the conflict and have forced them to reconsider the efficacy of their overall strategy in Yemen. If ever there was a time for the United States to exert its influence to encourage a change in the kingdom’s military tactics, that time is now.

The Trump administration missed the opportunity to use the State of the Union to publicly highlight the coalition’s collective failure in Yemen, and it should not compound that error by continuing to ignore the mistakes being made by Saudi Arabia in Yemen. The targeting of civilian populations and critical infrastructure by the Saudi military has created a humanitarian crisis in Yemen and risks inspiring future generations of extremists dedicated to disrupting the established order in the Arabian Peninsula, all while failing to meaningfully resolve the ongoing conflict. While Saudi Arabia remains a crucial regional ally, the United States must use its significant sway with the Saudis to convince them to change their military tactics in Yemen before the present situation devolves even further into instability and chaos.