The Dangers of a New Containment 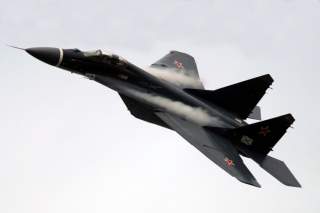 Editor’s Note: The following is the second of a series of articles from the Center for the National Interest’s new report: Costs of a New Cold War: The U.S.-Russia Confrontation over Ukraine. You can read the full report here.

The Ukraine crisis has ushered in a new era in U.S.-Russian relations. To be sure, relations had been deteriorating for some time—at least since fall 2011, when Putin announced his decision to return to the Kremlin. Stark differences between both countries over Syria and broader developments in the Arab world, Moscow's offer of asylum to NSA-leaker Edward Snowden, and Putin’s vehement accusations of U.S. interference in Russia's domestic affairs—thereby justifying a crackdown on internal dissent—have all stressed U.S.-Russian relations to the breaking point. The glimmer of hope offered by the agreement to work together to eliminate Syria's chemical weapons was quickly extinguished last fall by fundamental differences over the situation in the Ukraine.

But it was Moscow's reaction to the ouster of President Yanukovych in Ukraine—its annexation of Crimea and the destabilization of southeastern Ukraine, done with a combination of audacity and skill—that finally jolted the American political establishment into viewing Russia as a significant threat. That Russia was prepared to flout the rules of Europe's post–Cold War order to assert its interests was not particularly surprising. After all, it had already done that in the Georgian War in 2008.  But no one had anticipated that Russia would act in Crimea with such exquisite skill and leave the United States appearing flat-footed, lacking an adequate response. That set Ukraine apart from Georgia.

Obama's reset is now dead. Previous failed resets were followed in short order by new attempts. Indeed, U.S.-Russian relations since the end of the Cold War have been marked by a recurring cycle of great expectations followed by deep disappointments. But this time is different. Today's estrangement runs deeper than it has during any time since the Gorbachev years. No influential forces in either Washington or Moscow are calling for improved relations; rather, political leaders and the media in both countries are actively vilifying the other side. Most bilateral contacts have been totally severed. Looking forward, both sides increasingly see each other as long-term adversaries. Unlike in the past, no new reset is just over the horizon simply awaiting a new American president.

In the absence of significant hope for constructive relations, the American political establishment has reached back to the recent past, to the Cold War era, for guidance. The talk is of an updated containment policy.[1] At the beginning of the crisis in early March, President Obama warned the Russians that if they did not move to deescalate the situation in Ukraine, the United States was "examining a whole series of steps—economic, diplomatic—that will isolate Russia and will have a negative impact on Russia’s economy and its status in the world."[2] As the crisis worsened, the administration began to make good on that threat by sharply reducing bilateral contacts with Russia, levying targeted sanctions against individuals and entities considered either responsible for Russia's actions in Ukraine or to be financially close to Putin, and trying to rally European allies behind its policy. At the end of May, Obama claimed success.

Our ability to shape world opinion helped isolate Russia right away. Because of American leadership, the world immediately condemned Russian actions; Europe and the G7 joined us to impose sanctions; NATO reinforced our commitment to Eastern European allies; the IMF is helping to stabilize Ukraine’s economy; OSCE monitors brought the eyes of the world to unstable parts of Ukraine.[3]

With those and similar remarks, Obama may not have explicitly adopted a policy of containment, but the logic of his administration's actions points in that direction. The administration continues to threaten Russia with further sanctions should Moscow not act to deescalate the crisis, but it provides no clear indication of what Russia must do for the sanctions to be lifted. It speaks as if it intends to treat Russia as a long-term adversary (or for at least as long as Putin remains in power), while limiting cooperation—as in the Cold War—to those areas it judges critical to American security and which necessitate working with Russia (e.g., implementation of the new START treaty and retaining access to the International Space Station). Moreover, its tendency to look at Russia and the Ukraine crisis solely through the prism of security in Europe—the Cold War's central battlefield—lends its Russia policy a Cold-War aura, even if Obama insists we are not witnessing a return to that era.[4]

There are good reasons for skepticism that the United States can contain Russia as effectively today as it once did the Soviet Union. Today's world is radically different from the Cold War's bipolar world of existential struggle between two diametrically opposed views of man, society, and the state, between two world systems with few points of contact. Now, in contrast, we live in an increasingly multipolar, globalized world in which traditional geopolitical competition is overlaid by a set of global challenges, the management of which requires collective action. Russia, among the world's largest economies, is moreover increasingly integrated into the global economy, having abandoned the Soviet quest for autarky, which is now considered unworkable. Under those circumstances, the developed world will not defer to the United States, as it generally did during the Cold War, and the major emerging powers are unlikely to give the U.S. much heed. Notwithstanding closer U.S.-European Union alignment and greater European unity after Ukraine’s rebel forces apparently accidentally shot down Malaysian Airlines Flight 17, the travails in forging transatlantic unity on tough sanctions against Russia and the refusal of China, India, and Brazil to condemn Russia's annexation of Crimea foretell the challenges ahead. If the current cease-fire in Ukraine holds and the parties begin to seek a political settlement, these challenges will grow.

The challenges, however, are not likely to dissuade the American political establishment from considering—nor the Administration from implementing—ever-harsher measures to tame a resurgent Russia, even if actual containment is infeasible. The prevailing view is that the United States, as a matter of principle and national interest, must push back vigorously against a Russia that challenges the principles of the American-led world order and that more often than not seeks to constrain American action on a range of functional and geopolitical matters.

The world-order challenge is hardly new. Even under Yeltsin, the Kremlin never truly accepted American leadership. Initially it aspired to be an equal with the United States in managing the global agenda, however impossible an ambition that might have been given the gaping asymmetry in power and fortune between the two countries then. Later, it actively promoted a multipolar world, working with China and India, in particular, to create a counterbalance to the West. All along it vehemently opposed NATO expansion. Moreover, while it might have declared support for democratic and free-market principles, it upheld a traditional view of national sovereignty and rejected humanitarian intervention; witness the stiff opposition to NATO's military operation against Serbia for its actions in Kosovo in 1999. The United States evinced little concern, however, for Yeltsin's Russia was mired in a profound socioeconomic and political crisis and lacked the capability for effective resistance.

That changed under Putin. The remarkable and largely unanticipated recovery that took place on his watch gave Russia the resources and confidence to pursue more assertive policies against what it saw as the United States’ hegemonic designs. Throughout his first two presidential terms, Putin sought to constrain the United States in three ways: He championed the UN Security Council as the sole authority for legitimating the use of force (other than in self-defense) and sought to bring key issues to the Council, where Russia could use its veto to thwart or shape American initiatives; He built coalitions designed to limit America's room for maneuver, taking the lead in creating the BRICS in order to lessen Western domination of global economic management and joining China in the Shanghai Cooperation Organization to constrain the United States in Central Asia; And he sought to build a partnership with the United States based on binding agreements that would limit American options and make it more predictable in Moscow's eyes. Russia did not stray from that three-pronged approach during the Medvedev interlude, even if Medvedev himself presented a more pleasant face to Washington.

With his return to the Kremlin in May 2012, Putin took his opposition to the U.S.-led world order a step further, adding a moral dimension. He began to attack the West's growing decadence in rejecting "the Christian values that formed the foundations of Western civilization," including traditional sexual norms. While some Russian figures have advanced Eurasian values against European ones, Putin, more exactly speaking, has defended traditional European values against the West's post-modern interpretation of them, with an eye to bolstering his support among the deeply conservative Russian population, more traditional societies abroad, and even conservative segments of the West.[5]

The final, and most recent, challenge comes with Russia's seizure of Crimea, a clear violation of a fundamental principle of world order. Putin raised further alarms when he declared that Russia would "always defend the interests of [ethnic Russians and Russian-speakers in Ukraine] by political, diplomatic, and legal means."[6] Although he limited the scope of his remarks to Ukraine, they were understandably read by Russia's immediate neighbors, all of which have sizable populations of ethnic Russians and Russian-speakers, as an implicit threat. Moreover, a generalized right to defend the interests of one's ethnic and cultural community would threaten havoc in a world, including Europe, where most states are in fact multiethnic.