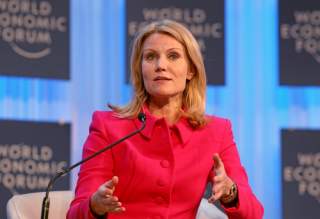 Buried under a mountain of headline news on the seemingly endless Greek crisis, Vladimir Putin’s neo–Cold War posturing, and the bad-boy image of China’s island-building activities in the South China Sea, the Danes quietly went to the polls on June 18 to elect a new government. While Denmark is a small country of 5.6 million people, and its economy is hardly the size of Germany’s, France’s or Italy’s, the election clearly has a European echo worth noting.

The fall of the center-left government of Prime Minister Helle Thorning-Schmidt and its replacement by a center-right coalition is significant, as it was partially caused by growing anti-immigration sentiment and the related perception that the EU is responsible for what some have called “welfare tourism” on the part of refugees fleeing the Middle East and Africa. Europe’s front line on refugees may be in the Mediterranean, but the ramifications are being felt much farther north.

Denmark’s last election in 2011 was about the economy. Like many European countries, the Danish economy was still recovering from the Great Recession and the following sovereign debt crisis that rocked much of southern Europe. The incoming Thorning-Schmidt government took austerity measures that improved government finances, but were unpopular. At the same time, the economy flitted in and out of recession. In 2014, real GDP growth was still weak (1.0 percent), but unemployment had fallen to 6.5 percent (from 2011’s 7.6 percent). In 2015, economic prospects appeared a little brighter, which gave the center-left coalition the inspiration to call an election in May for June 18.

While economic matters continued to be a key topic for most Danes, immigration emerged as a highly charged campaign issue. Over the past thirty years, Denmark has seen its immigration steadily rise; it is estimated that immigrants now constitute 7-8 percent of the population. Many of those arriving under refugee status (which is a smaller group of overall immigrants) come from non-Western countries—namely, Bosnia, Iraq, Iran, Pakistan, Palestine and Somalia. One long-term result of such immigration is that Islam is now the second-largest religion in the country, with 4 percent of the population claiming it as their faith.

While the idea of having Muslims in Danish society is not a big issue, considering there are Jews and Hindus outside of the dominant Christian population, there is a “clash of civilizations” tension over freedom of expression. This became a major debate in Danish society in 2005, when the newspaper Jyllands-Posten (Jutland Post) published cartoons depicting the Prophet Mohammad (a major taboo for Sunni Islam) that resulted in riots and demonstrations throughout the Muslim world, as well as terrorist attacks on the paper.

The immigration/freedom of expression issues further dovetailed in February 2015, when Copenhagen witnessed a shooting at a public event called “Art, Blasphemy and Freedom of Expression,” which was followed by another attack on the city’s Great Synagogue. At the end of the shooting spree, three people, including the gunman, were dead and a number of others wounded. The gunman was later identified as Omar Abdel Hamid El-Hussein, a twenty-two-year-old man of Jordanian-Palestinian parents. This came shortly after the January Islamic terrorist attack against the French satirical magazine Charlie Hebdo in Paris that left more than a dozen people dead, leaving some to interpret the Copenhagen attack in a similar light.

Prime Minister Thorning-Schmidt’s government was keenly sensitive to the increasing discontent over immigration. In her New Year’s speech, the Danish prime minister stated: “If you come to Denmark, you must of course work, you must learn the Danish language, and you must mix with Danish colleagues.”

Although some of the ruling center-left coalition was ill-at-ease with the growing hardline on immigration, as well as the imposition of tighter immigration rules (which make it harder to claim asylum and easier to send refugees back if the situations in their home countries improve), the public’s attention remained focused on the issue. To this backdrop, the Social Democrats’ approach to the campaign was to highlight the improving economy and its tougher line on immigration. Indeed, the party’s website stated: “Denmark is a small country and there are limits as to how many foreigners we can accept.”

The election results were close. The Social Democrats won the largest number of seats (actually gaining ground), but its government coalition allies slipped. Consequently, the center-right opposition emerged one seat ahead of Thorning-Schmidt’s center-left grouping and Lars Lekke Rasmussen, a former prime minister and leader of the conservative Liberal Party, emerged likely to become the country’s next leader.

The election’s major winner was the Danish People’s Party (DPP), which increased its share of the vote from 12.3 percent in 2011 to 21.1 percent and its number of seats went from twenty-two to thirty-seven, which made it the second-largest party in the Folketing, behind the Social Democrats. Prior to the election, the DPP vowed to support Rasmussen as prime minister.

The DPP was founded in 1995 by Pia Kjaersgaard, a vocal, nationalist political leader who sought to capture Danish discontent over immigration. In the party’s early days, it was often described as “far-right, Eurosceptic, anti-immigration, xenophobic and populist.” That changed in the past couple of years as the DPP moved to overhaul its image and attract a broader base of voters, some of them middle class. Kristian Thulesen Dahl, who assumed the leadership mantle in 2012, is regarded as a smoother political personality, being described as charming, perceptive and mild mannered. He has also honed the message that the economic cost of immigration is unacceptable; many Danes are uncomfortable with outsiders getting payments from a system they have never paid into.

The DPP plays a large role in where Denmark goes next. The party can either join a Rasmussen-led coalition government or provide external support for what would be a center-right minority government. While the DPP wants tougher immigration rules, it also wants higher welfare spending for Danes. The demand for the latter could complicate a coalition under Rasmussen, as he is opposed to greater social spending.

Although Danes have a tradition of open-mindedness about immigration and are generally pro-European, there is a noticeable undercurrent of right-wing, populist angst, with an anti-EU and anti-immigration bias. In this, Denmark is hardly alone; the rise of Eurosceptic parties has already been seen in Greece, Finland, Sweden, Netherlands, France and the United Kingdom. With Greece threatening to default, tensions in the Eastern European borderlands and waves of immigrants seeking to head north from Africa and the Middle East, Denmark’s elections show that democracy is still at work, but many of the very same voters are less supportive of the grand experiment of a unified Europe and the costs of sharing its wealth with others.

The EU’s grand design is under stress; Denmark’s elections are indicative of the many challenges the union will face in the years ahead.