The Death of a Baltimore Detective 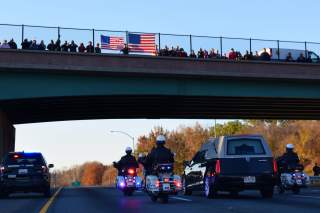 A cluster of American flags fluttering in the wind at the corner of a vacant lot in West Baltimore marks the spot where the city began to transition from somewhat tolerable pockets of hope, opportunity and chaos into a town where anything goes.

In less than three weeks, spanning between late October and mid-November, an armed security guard had been gunned down while working late hours to pay for Christmas gifts, an off-duty officer for the Metropolitan Police Department was shot to death inside a car, and a Baltimore homicide detective was mysteriously killed with a bullet from his own gun while trying to solve one of the city’s hundreds of unsolved murders. The flags pay tribute to the last day he was alive, and mark the first day of abject uncertainty.

People were already being killed in Baltimore at a record pace, but now previously unthinkable crimes were being thrown into the mix—and for weeks and weeks afterwards, they left deep scars in the city and remained unsolved.

For Baltimore, the death of forty-three-year-old homicide detective Sean Suiter was destructive in multiple ways. In the days following the fatal shooting, the people who lived in the houses surrounding the shooting site, a neighborhood known as Harlem Park, were subjected to a variety of restrictions designed to weed out the individual whom police believed had been injured when they shot Suiter. The neighborhood that police cordoned off after the shooting had many vacant houses, and the suspect could have hidden inside any one of them. Its alleyways were cluttered with trash, which could have been used to conceal evidence. It was rife with opportunities for someone with bad intentions. Perhaps the suspect was even getting assistance from a resident, that was something the police had to consider.

The investigation into Suiter’s death continued for days, and eventually some residents started to complain about how they were expected to show identification to police and couldn’t drive their vehicles down the street to their homes. Those concerns caught the attention of the American Civil Liberties Union of Maryland, which said in a November 19 statement that it was also “troubled by reports” that people entering or leaving the area were subjected to pat-down searches and that nonresidents had been barred from entering the area.

“While the search for a killer is, of course, a high priority for people, the limits on lawful police behavior do not disappear even when engaged in that pursuit,” the statement said. “And at least one federal appellate court has said that a similar police cordon and checkpoint system was unconstitutional.”

That 2009 ruling was made by a three-judge panel of the U.S. Court of Appeals for the District of Columbia Circuit back in response to a crime-reduction checkpoint program the Metropolitan Police Department instituted in 2008. The Maryland ACLU, wary of the similarities between the 2008 incident and the police activity in Harlem Park, is now seeking access to body-camera footage that shows how the Baltimore Police Department’s officers interacted with civilians during the investigation.

“Many people in Baltimore see these actions as a reflection of the way in which the police—and not only police, but other institutions in Baltimore—treat residents as if they don’t really matter,” David Rocah, senior staff attorney for the Maryland ACLU, said. “Obviously what happened here was extraordinary in terms of the police behavior and isn’t what normally happens when there’s a shooting, and the way in which residents lives were upended as a result—with no real explanation and no adequate thus far justification—I think is rightly seen as reflecting a fundamental disconnect between rhetoric and reality.”

The Baltimore Police Department did not respond to questions about whether it intended to make amends with Harlem Park residents or alter the way it handled high-profile investigations in the future. And there’s a danger in that, said Jonathan Smith, the executive director of the Washington Lawyers’ Committee for Civil Rights and Urban Affairs. Creating discontent and distrust in the community puts the police investigation in jeopardy, said Smith, who used to run the Public Justice Center in Baltimore.

“It may create such hostility in the community that your best witnesses might not be willing to work with the police department to solve this problem,” he said.

Additionally, dismissing that discontent may impact some of the positive moves the department has made toward reforming past police practices by reinforcing negative police stereotypes, Smith said.

“There is a long history of police going into the African-American community and doing things like extensive stop-and-frisk, closing corners, holding people without lawful arrests—and this is happening against that backdrop at a time when reform is just beginning, and I’ve got to believe this has been a setback for the reform process.”

The public dispute over constitutional rights and the police-community relationship wasn’t the only unintended negative outcome of the investigation into Suiter’s death. The second punch came when the crucial details surrounding his death were finally made public. Kevin Davis, the Baltimore Police Department’s commissioner, announced during a November 22 press conference that the bullet that fatally struck Suiter was fired from his own gun, just one day before he was expected to testify against corrupt cops. The press conference, held before the long Thanksgiving weekend, sparked mayhem. Conspiracy theories immediately began circulating. They were wild and rampant and dangerous. They struck and stung Suiter’s colleagues. Now, not only did they have to grapple with the heartbreak that comes with losing a friend, but they also had to quietly endure speculation that perhaps they were party to a cover-up or guilty of foul play. They had to stand by and watch the public debate over whether their friend had walked into a vacant lot with the intention of killing himself.

By November 22, Suiter’s death was no longer a mysterious tragedy. It was a destructive tear in the social fabric of a city struggling to recover from decades of police misconduct and dealing with an investigation into the corrupt actions of the Baltimore Police Department’s elite Gun Trace Task Force—a city still divided over a controversial arrest that proved fatal for twenty-five-year-old Freddie Gray and damaged by a riot that left hundreds of officers questioning the judgement of its former police commissioner.

Baltimore is a town where bad things unabashedly walk in the light and beautiful things persist in the daunting presence of the dark. To some people, these contradicting elements throw a harsh spotlight on the city’s deep-seeded issues. There are also small social nuances indicating that years of violent crime have taken their toll on Baltimore’s residents. It’s not uncommon for people to say “stay safe” when parting ways, as opposed to “goodbye.” It’s as if the two words bypass the assumption that the next day is guaranteed. It’s not; not in Baltimore. And it’s not uncommon to see apathy appear in the spaces where sympathy was once expected, especially at crime scenes.

Crime-scene investigations pop up unexpectedly and frequently in the city’s nine police districts. They are necessary but cumbersome events that hinder residents’ ability to perform simple tasks, such as moving their cars, buying groceries and running many other essential errands. As a result, the population has become resistant to their presence. People duck under the crime-scene tape without a second thought to whether they might wreck an investigation. They’ll do it if the crime scene is blocking the pathway to the liquor store. They’ll do it if the only shop that sells lottery tickets is wedged between two pieces of yellow tape. Sometimes the motivation is defiance. Sometimes it’s determination. Yes, life has come and gone from that space in time. But life must also go on.

In the weeks following Suiter’s death, that cycle of survival was on full display in the neighborhood where he had been conducting his last homicide investigation. Reporters occasionally stopped by the area to get video footage of the neighborhood or to talk to its residents. People went about the business of living as they walked past bits of crime-scene tape that police left behind. On November 26, a cold but sunny Sunday, people hustled past the site on their way to church. Some of them stopped to take pictures of the cluster of American flags. Others made a beeline down the street to where a group of good-hearted community advocates were offering free food to anyone who was hungry. If not for the flags and the tape, there would have been nothing to indicate that another horrific event had left a scar on the city.

A few days later, on November 29, Suiter’s family and friends attended his funeral service at a church in northeast Baltimore, and then buried him at a cemetery in the nearby town of Timonium. Hundreds of people attended his funeral while others staked out positions along Interstate 695, a highway that loops around the city, in the hopes of watching his funeral procession pass by. Firefighters parked their trucks on the side of the road. People gathered on overpasses with flags. They watched law enforcement vehicles and motorcycles zip past them for quite some time, until the hearse carrying Suiter's coffin approached in the distance. As it did, the highway became eerily empty and quiet, like a beach that has had its sea recede in advance of a violent tsunami.