The Deep State Is a Distraction 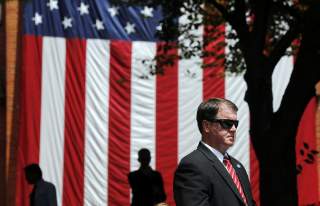 THERE ARE many historical examples of groups operating within, beside or in opposition to legitimate or illegitimate sitting governments. Perhaps the most notorious instance of an effective “deep state” is the covert “Black Hand” organization. Headed by the Serbian intelligence chief, Colonel “Apis,” it engineered the assassination of Austria’s Crown Prince Franz Ferdinand in Sarajevo in 1914, setting off the First World War.

Today, in the United States and elsewhere, there are undoubtedly groups, motivated by principle, amusement, or profit, that seek to influence government actions covertly. Such groups employ conventional tools such as lobbying and campaign contributions, and are increasing delivering their message through both conventional and social media.

Noisy exchanges on TV programs, tweets from the White House and magazine commentaries are extremely weak reeds on which to build a theory of the existence of a nefarious “deep state.” The more paranoid supporters of President Trump say that the new deep state constitutes organized resistance by federal government employees who are determined to subvert his presidency. It should come as no surprise that federal employees, mostly in civilian agencies, dislike President Trump’s politics and policies, especially those that call for budget cuts and reductions in force. But to call this resistance organized is a stretch. Indeed, it is laughable to claim that an escalation in leaks from disgruntled government employees intending to influence policy serves as prima facie evidence of a deep state. Quite the contrary. Such leaks, which are abhorrent to me, many others view as a strength, not a weakness, of U.S. democracy.

There is little analysis or evidence to bear on the question of the existence of a deep state. Perhaps a simpler question is whether there has been a shift over recent years to more behavior that is characterized as coming from a deep state, and whether such behavior risks national security. I doubt both propositions. The significant national-security threats that face the nation today—Iran, North Korea, terrorism, competition with China and Russia—are not central in the deep-state narrative.

Concern with a new and more dangerous conspiracy by U.S. intelligence agencies, greed of private-sector firms, or dissatisfied federal or congressional staff, is not a mortal threat to national security or stability (as Colonel Apis was in 1914). Such behavior has been present in U.S. history since Aaron Burr’s effort to establish an independent republic in the west. More importantly, the very genuine terrorist threat (especially augmented by cyberattacks) that the nation faces has an entirely different set of causes, manner of delivery and sponsorship.

The deep-state narrative is stuck on a single subject: who is doing what to whom in Washington—a matter that is of scant significance to most Americans and to the future of the republic. It is the result of President Trump’s unexpected presidential victory and the clash of his admittedly bizarre behavior and voice on the ears of the comfortable political elite that have been in office for decades. I have sympathy with both views: President Trump’s behavior and policy actions are disruptive and nonsensical. However, President Trump is addressing a set of issues that have been avoided for some time by right-thinking people in both parties: the linkage between trade and jobs, economic growth, and overregulation.

Here is my advice. When you hear the term “dark government,” change the channel or turn off the radio; if you see an article, turn the page. Give your attention to questions that directly bear on the welfare of our country going forward: health care, climate change, innovation and genuine national-security concerns.

John Deutch was deputy secretary of defense and director of central intelligence in the first Clinton administration. He was a member of the President’s Foreign Intelligence Advisory Board for President George H. W. Bush.