The Deeper Meaning of the Iran Nuclear Talks: ISIS, the Middle East and Beyond 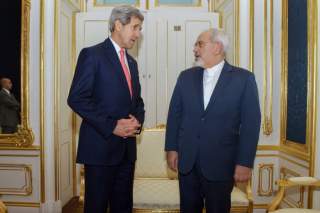 It’s in Washington’s interest to separate the nuclear talks from other regional crises; it’s not in Iran’s. But that’s only as far as the nuclear negotiations are concerned. The region is disintegrating and even the merest coordination with Iran would make a difference.

Hardliners on both sides worry that their respective governments will agree to a “bad deal” to get the nuclear issue out of the way and focus on ISIS. That’s because any meaningful engagement with the other side is predicated on resolving the nuclear issue first.

That worry isn’t entirely unreasonable. In June, Deputy Secretary of State Bill Burns briefly met with his Iranian counterparts on the sidelines of the nuclear negotiations to discuss events in Iraq. It’s no surprise that some Iranians view the alarming spread of ISIS as an opportunity to finally close the country’s nuclear dossier and begin to normalize its political and economic relations with the West. They believe that the West, and the United States in particular, needs Iran in its fight against ISIS.

Israel believes the P5+1 is more likely to concede a number of sticking points to Iran to pave the way for cooperation on ISIS. Prime Minister Benjamin Netanyahu has gone as far as linking Iran and ISIS, describing them as two sides of the same coin. In the United States, both views resonate.

The United States recognizes that strong regional partners are vital to managing the current disorder. Today, the main partners are Turkey and Saudi Arabia. But Iran is a dominant state in the region. It is large, resource rich and a potentially powerful partner in an unstable region, with a population almost the size of Turkey’s, and double the size of Saudi’s. Furthermore, it has the capacity to pursue a serious international agenda, and it shares a land border with Iraq.

Both sides are mindful of the role the other can play in effectively tackling ISIS. And today, for once, Washington and Tehran share the same goals in Iraq: avoid its partition and defeat ISIS. Iran is more committed to Iraq than any other regional player. Iraq is Iran’s backyard and is strategically significant to its national interests for economic, energy, political and religious reasons.

ISIS cannot be defeated with airstrikes, and that’s all the West seems prepared to do. The coalition needs local and regional support. It must be prepared to send in large numbers of ground forces for a long time. Only Iran will be both able and willing to do that.

While it is politically impossible for Washington and Tehran to openly cooperate with one another, tactical coordination is possible—and necessary. Some cite the Amerli counteroffensive as an example of Iranian-U.S. coordination, stating that both the Revolutionary Guards’ support to the peshmerga on the ground and U.S. airstrikes were vital in pushing ISIS back.

But the government in Tehran is adamant that it does not want to link discussions on ISIS and its nuclear program. Foreign Minister Javad Zarif has stated time and again that his mandate only covers negotiations on the nuclear dossier, not ISIS.

Part of the reason is that the Foreign Ministry doesn’t control the Iraq and Syria files, Iran’s Revolutionary Guards do. Iranian politics is complicated, but in short, Zarif can’t compel the Guards to make good on his promises, so he is wary of making any.

While defeating ISIS is a priority across the political spectrum, hardliners in Iran reject rapprochement with the West, particularly the United States. For them, the nuclear talks are already a hard pill to swallow. Cooperation on ISIS could be construed as “helping America,” and that will meet significant domestic opposition.

But there are good reasons that the West could trust Iran on Iraq. Unlike other conflicts in the Middle East, the territorial integrity and stability of Iraq are not optional for Iran. As such, Tehran is a key stakeholder in the crisis. This insistence to keep the two issues separate is to Iran’s disadvantage. Tehran could use one as leverage for the other, implicitly offering to help in the fight against ISIS in exchange for some leeway at the talks. If ISIS matters as much to everyone as President Obama says it does, then that’s a good deal for the West, too.

But Iranian domestic politics have gotten in the way. While the content of the negotiations is focused on Iran’s nuclear program, a final deal is about more than just that. It’s about the prospects for a peaceful and stable region, something that simply doesn’t look possible without engagement with Iran. It’s time for President Obama to start putting some foreign-policy “wins” on a pretty empty board.

Dina Esfandiary is a Research Associate at the International Institute for Strategic Studies (IISS) in London.

Ariane Tabatabai is an Associate at the Harvard Kennedy School’s Belfer Center for Science and International Affairs.