The Road to a Bad Nuclear Deal with Iran 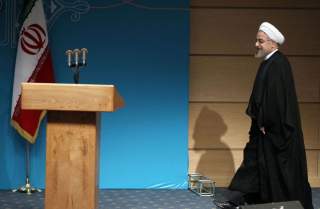 The decision to extend nuclear negotiations between Iran and the P5+1 beyond the July 20 deadline was based on an assessment that despite remaining lack of agreement on key issues, enough progress had been made to justify a four-month extension of the talks. U.S. Secretary of State Kerry announced on July 18 that the term was extended in order to give the parties “time to continue working to conclude a comprehensive agreement…warranted by the progress we’ve made and the path forward we can envision.” For its consent to continue the talks, Iran gained access to an additional $2.8 billion of its restricted assets, the four-month prorated amount of the original Joint Plan of Action (JPOA) commitment. This financial relief will not only ease some of the economic and political pressure on Iran, which is the only leverage the P5+1 has in this difficult negotiation, but also sends a problematic message that not only are there no negative consequences for not reaching a deal by the July 20 deadline, the benefits continue.

Significantly, in a June 30 op-ed in The Washington Post, Kerry stated that the United States would not agree to an extension “merely to drag out negotiations.” He complained in the article that Iran’s public optimism about the potential outcome of the negotiations had not been matched by the positions Iran had articulated behind closed doors, and that “Iran must show a genuine willingness to respond to the international community’s legitimate concerns in the time that remains.” If that was the case at the end of June, what had changed by mid-July? With absolutely no indication of any softening of Iran’s steadfast intransigence on the nuclear front—if anything, positions have hardened—what could have convinced the Secretary of State that there was suddenly reason to believe that the next four months might see the significant Iranian concessions that had proven elusive in the previous six? This question will no doubt remain a cloud over the coming months of negotiations.

In his July 18 statement, Kerry referred to a preliminary text on the table—with holes, gaps and disagreements—that sets forth the by-now-well-known issues under discussion: the plutonium production capabilities of the heavy water reactor under construction at Arak, the underground uranium-enrichment facility at Fordow, the enrichment capacity of the Natanz facility, and the need for enhanced monitoring and verification measures. From official U.S. statements (including by unnamed officials), and from statements that come from the Iranian side, the situation seems to be as follows: The plutonium production capabilities of the Arak reactor are likely to be limited, but not eliminated, and it is not yet clear whether by physical or administrative means. The Fordow facility is likely to be transformed into a nonnuclear research and development (R&D) facility, but will not be closed down entirely, as had been demanded by the P5+1 back in 2012. A major point of contention remains the uranium-enrichment capacity of Iran, which was exacerbated by Khamenei’s statement that the Natanz facility should provide the enriched uranium for Iran’s planned nuclear-power program. So instead of indicating a move toward the drastic reduction in Iran’s enrichment capacity that the P5+1 demands, Iran is set to pursue a ten-fold increase in its indigenous enrichment capability. Without a severe reduction in Iran’s uranium-enrichment program, its potential for an undetected ‘breakout’ capability and the production of a nuclear explosive device will remain a significant one.

But there are additional critical issues at stake. One regards a probe of the weaponization aspects of Iran’s nuclear program—also referred to as the Possible Military Dimensions (PMD)—which is indispensable for understanding Iran’s nuclear ambitions, and cannot be ignored. According to recent reports, the IAEA is concerned about Iran’s ongoing lack of cooperation in providing answers to hard questions in this regard, and lack of engagement with the Agency’s current investigation ahead of a late-August deadline regarding two of the issues at stake.

Another issue of great importance is the ‘sunset provision’ for the comprehensive deal—namely, for how many years Iran will be under the agreed-upon restrictions before it can go back to being regarded as any other nonnuclear-weapon state party to the NPT. The P5+1 have spoken about twenty years, whereas Iran has mentioned three to five, and no more than seven. This is a provision that was unfortunately included in the JPOA. It is unfortunate, because if Iran is not forced to make a strategic U-turn in the nuclear realm, after having admitted that it violated the NPT for decades by working on a military nuclear program, what is the justification for a sunset provision? This will only enable Iran to go straight back to its previous practice of nuclear deceit after a designated period of time. With that in mind, the P5+1 certainly cannot entertain any time framework that is less than twenty years. And even following this period, the removal of restrictions should be contingent upon the approval of the UN Security Council, which will take into account all relevant factors relating to Iran’s behavior in the international arena.

Another point that must be agreed upon is the verification mechanism. Beyond provisions for an upgraded and intensified verification program, this mechanism must include an “anywhere, anytime” clause, without which Iran would be able to carry out a parallel, concealed nuclear program, including the development of a nuclear explosive mechanism. Even with greatly enhanced verification, detecting and dealing in a timely manner with Iranian violations will always face a multitude of problems. As such, verification cannot be the sole basis of a policy of nuclear prevention, nor can it replace the very necessary significant dismantlement of Iran’s vast nuclear infrastructure.

Secretary Kerry’s July 18 statements seem designed to create the impression that the four-month extension could produce a good deal. But there is ample reason to believe that such an agreement between Iran and the P5+1 will be no more achievable in four months than it was now, especially if Iran is able to withstand the sanctions. The worst possible outcome is a bad deal with Iran that reflects multiple concessions by the P5+1 on different aspects of Iran’s nuclear program. This would leave Iran with a legitimized nuclear program, including the potential to break out at will and produce a nuclear explosive device in short order.

But the prospect of no agreement in four months must also be rejected. For Iran, this might seem like a workable plan, as it would leave the Islamic regime in a much better position than before the JPOA, in both technical and economic terms. It might not even spark a crisis if Iran declares its intent to continue to adhere to the technical terms of the JPOA, and to negotiate with the P5+1. The international community cannot enable Iran to continue the interim situation indefinitely in this manner, with a very short breakout time. It must clarify to Iran that this is not an option.

Finally, while the current talks with Iran are rightly focused exclusively on the emerging nuclear threat from Iran, the broader context should not be completely ignored either: not the situation inside Iran—where gross human-rights abuses continue—nor Iran’s blatant support for terror. The rocket barrages fired by Hamas over the past weeks at Israel’s population centers, with the express aim of killing Israeli civilians are supplied by Iran. And just as a reminder of where the so-called Supreme Leader of Iran stands on this issue, he demands continued armed resistance until Israel is eliminated. “Israel’s annihilation is the only real cure”, said Khamenei. These words should be uppermost in the minds of the P5+1 negotiators as they move toward the late November deadline.

Ephraim Asculai is a Senior Research Fellow at INSS and a former senior scientist at the Israel Atomic Energy Commission. Emily B. Landau is Head of the Arms Control Program at the Institute for National Security Studies (INSS), at Tel Aviv University and the author of“Decade of Diplomacy: Negotiations with Iran and North Korea and the Future of Nuclear Nonproliferation.”