The Difference Between an Ally and a One-Night Stand 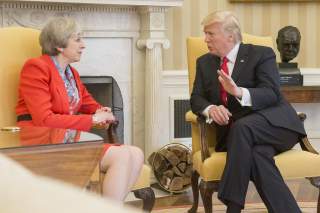 But should Mexico be regarded as an “ally” of the United States? It is certainly a geographical neighbor and a trade partner. Many Mexicans live in the United States as legal and illegal immigrants, and much of the cooperation between Washington, DC and Mexico is actually aimed at preventing more Mexicans from crossing the border into a relatively unwelcoming neighbor.

Yet geographical proximity doesn’t necessarily make for a friendly, neighborly relationship, as attested by the history of relations between Germany and France or Turkey and Greece. If anything, common land borders can lead to tensions between countries. Nor do robust economic ties create the conditions for close alliances.

The United States is Venezuela's largest trading partner, and much has been written and said about the growing trade and investment links between China and the United States. But no one would describe Caracas and Beijing as allies of the United States. In fact, relations with those governments tend to be adversarial on many levels.

That millions of citizens and noncitizens of Mexican extraction live in the United States may have helped strengthen the bonds between the two countries, but that has also been a source of tensions in the relationship.

And in any case, despite the fact that German Americans are the largest of the ancestry groups, as reported by the U.S. Census Bureau (with an estimated size of forty-six million in 2014), the United States and Germany ended up fighting two shattering world wars in the twentieth century.

The relations between Australia and the United States do exhibit almost all the marks of an alliance—and also feel that way. They have been formalized by the Australia, New Zealand, United States Security Treaty and the two countries’ membership in the exclusive Five Eyes group, or FVEY, an intelligence alliance that consists of the United States, Australia, Great Britain, Canada and New Zealand. The alliance commits them to joint cooperation in signals intelligence.

Australia has fought side-by-side with the United States in the two world wars and in most of the American military undertakings since World War II, including the Korean War, the Vietnam War, the Gulf War and the Iraq War.

And as demonstrated by the success of Australian actors in Hollywood, it is safe to say that most Australians would be able to assimilate in American society and culture in a relatively short period.

On one level, applying the term “ally” so loosely, in times to almost every government that maintains a diplomatic relationship with Washington, is another example of the misuse of language. Like when you refer to your hundreds of “friends” on Facebook, many of whom you will probably never meet in person and who don’t even make the cut as your “buddies” or “acquaintances.”

But on another level, when it comes to the world of international relations, referring to anyone or everyone as an “ally” not only creates undue expectations on all sides, but also risks the chance of making the wrong move.

Paradoxically, because Australia is such a close ally of the United States, an angry exchange of words between their leaders would probably not damage bilateral ties between the two countries. A strong marriage will survive even the ugliest dispute.

But because Mexico and the United States aren’t allies, but only neighbors and partners, the angry conversations between President Trump and President Nieto could actually damage the delicate relationship and exacerbate tensions between the two countries over issues like trade, illegal immigration and drug smuggling.

“A great power like the United States gains no advantage and it loses prestige by offering, indeed peddling, its alliances to all and sundry,” wrote columnist and political philosopher Walter Lippmann. He warned Washington that an alliance “is like a chain” and the United States “is not made stronger by adding weak links to it.” In that context, Mexico is certainly a weak link.

However, since the end of the Cold War, Washington, under Democratic and Republican administrations, to use Lippmann’s phraseology, has been “peddling its alliances to all and sundry.”

NATO’s membership was enlarged from sixteen in 1990 to twenty-eight, and the organization has signed Individual Partnership Action Plans with eight other countries, including Ukraine and Georgia.

And the list of non-NATO allies now includes fourteen countries, ranging from Japan and South Korea, with which the United States has mutual-defense agreements, to the Philippines and Thailand, which have special security relations with Washington, and to Kuwait and Bahrain, U.S. military protectorates in all but name.

And let’s not forget the many other “allies” that joined the United States in the “wars” against terrorism and drugs, that belong to this or that “coalition of the willing” or happen to be occupied by the United States (Iraq) or NATO (Kosovo).

One of those “allies” has been Pakistan, which the George W. Bush administration designated as a major “non-NATO ally” in 2004, with then-secretary of state Colin Powell declaring that “the United States stands with Pakistan” as he highlighted Islamabad’s commitment to cooperate with Washington in fighting Al Qaeda and other terrorist groups in South Asia.

But did it really make sense to refer to a government whose intelligence service, the Inter-Services Intelligence, assists Al Qaeda and the Taliban in their military efforts against U.S. troops in Afghanistan as an “ally.” Labeling both Pakistan and Australia as “allies” is like using the term “love” to describe both a long marriage and a brief one-night stand.

Indeed, a strategic one-night stand is the way one should describe the diplomatic and military ties between Washington and Islamabad. Just because the ISI occasionally helps the United States target Al Qaeda and Taliban cells in Pakistan, that doesn’t mean the relationship is one between trusted security partners, or a “married” strategic relationship like the one the United States shares with Australia.

Keeping that distinction in mind is important when there arise major frictions between Washington and Islamabad, since those are expected between two countries that don’t share global strategic interests and values. In fact, Osama bin Laden’s plans to attack the United States were hatched in Taliban-ruled Afghanistan, which was, at the time, a Pakistani client.

So when Americans learn that some several ISI officers may have helped bin Laden hide in Pakistan, they shouldn’t be “Shocked! Shocked! Shocked!” American officials shouldn’t refer, as they do, to “unavoidable tensions” between two “old allies.” It’s more like unavoidable tensions between a global patron and its irresponsible client state—a description that can sometimes be applied to Washington’s relationship with Saudi Arabia, Egypt and most other Middle Eastern countries.

In general, political-military alliances are supposed to reflect the common strategic interests shared by two or more nation-states in deterring an aggressive nation-state outside of the alliance that all alliance members view as a threat. These alliances usually include a commitment by allies to defend one another if attacked by an aggressor.

Hence, the United States formed close military alliances with the Soviet Union during World War II and fascist Spain, a NATO member, during the Cold War. The decisions to support these and other allies with military power if necessary—even though they didn’t share American values—reflected the belief that such alliances would serve to protect core U.S. security interests.

But the process of expanding NATO and making new commitments to non-NATO allies seems to reflect institutional inertia and ad hoc considerations. It wasn’t based on any realistic assessment of U.S. interests and resources, and it featured hardly any debate. Are most Americans even aware that they are now committed to go to war to protect Estonia and Latvia? The majority of Americans have probably never heard the names of these two nations, and likely don’t know that they are “allies” of the United States.

There is no need for detailed history and statistics to conclude that all members of the Five Eyes group are, indeed, “long-time allies” or “historic allies” of the United States.

It has become a foreign-policy axiom that the Americans will never go to war against any of these four countries and will come to their assistance if they are under threat, including through the use of military force. Most Americans who are familiar with the history of America’s relationship with Great Britain and the common values and cultures the two nations share would feel that would be the right thing to do.

Indeed, an attachment to common history and values tends to turn an alliance into a full-blown strategic marriage. While the United States has been expanding this strategic circle to include France, Germany and other NATO members, Japan, South Korea and, to some extent, Israel, there is always a chance that these alliances could end with a divorce at some point in the future. The Coming War with Japan was the title of a best seller in the 1990s.