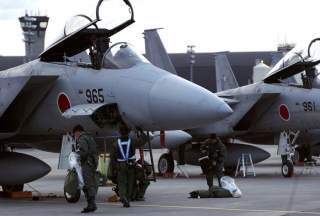 At the recent Shangri La Dialogue, Japanese Prime Minister Shinzo Abe and Chinese Lieutenant General Wang Guanzhong traded verbal barbs regarding each other’s countries’ regional behavior. Abe, clarifying his support for ASEAN states locked in territorial disputes with China in the South China Sea, stressed the importance of international law, indirectly criticizing China’s approach to territorial disputes. Wang, in turn, accused Abe of being provocative and trying to stir up trouble. While making for good drama, the verbal barbs reflect an increasingly dangerous situation playing out in the East China Sea that carries real-world consequences that may prove difficult to deescalate. Assuming neither country is willing to risk unintended conflict, it behooves Beijing and Tokyo to discuss mutual rules of interaction between their military forces.

At issue is an incident between military aircraft that took place on May 24. Chinese SU-27 jet fighters flew incredibly close to two Japanese surveillance planes, within fifty meters of a Maritime Self-Defense Force OP-3C aircraft and within thirty meters of an Air Self-Defense Force YS-11EB aircraft. The area where the incident took place was several hundred kilometers north of the Japanese-administered Senkaku Islands (“Diaoyu” in Chinese) and in an overlapping region of both countries’ Air Defense Identification Zones (ADIZ), areas where states ask aircraft to identify themselves and provide flight plans.

Disputed, however, is the circumstance of the event. China initially argued the Japanese aircraft entered an area where China and Russia were conducting joint naval exercises, thereby forcing China to scramble jets to meet the Japanese aircraft that were monitoring and interfering with the exercise (i.e. being provocative). Japan denies this account, arguing not only did the incident take place outside the exercise area but that it was carrying out routine information-gathering operations over the high seas, an activity backed by international law. China then piled on a separate argument, saying its planes were defending its ADIZ against Japanese provocations.

Yet, while there is no international law that prescribes behavior regarding joint exercises in international waters, it is considered prudent to avoid an area until after the completion of an exercise. If Japan entered into an area where China and Russia were undertaking joint exercises, then Japan would be at fault (although not legally), particularly because China released a no-fly notice prior to the exercises. This point appears to be moot, however, as Japan vehemently denies China’s claim.

Legal arguments that are consistent generally have greater authority. Yet, China convoluted its argument by also saying it was defending its ADIZ. Under international law, there is no legal support for the sovereignty of one’s ADIZ apart from the airspace above one’s territorial sea. Under the UN Convention on the Law of the Sea (UNCLOS), this translates to a maximum of twelve nautical miles from one’s shores. China’s position of defending its ADIZ from Japanese provocation far from its shores, therefore, lacks a basis in international law.

Regardless of these differences, one point stands out. There is a practice among pilots to maintain safe distances between aircraft. Japan, for instance, maintains a distance of several hundred meters from other aircraft when it scrambles its jets. To send warnings to foreign aircraft, its aircraft will usually flap their wings or radio an alert. The Chinese aircrafts failed to provide any such signaling; rather, they flew dangerously close, thereby risking the lives of both Chinese and Japanese pilots. Given China’s jet fighters are faster and more maneuverable than Japan’s propeller planes, the blame for the dangerous behavior falls solely on China.

This brings us to finger-pointing at China (once again). Similar to Abe Denmark’s recent observations in the National Interest about the South China Sea, Beijing’s modus operandi in the East China Sea is to couch its actions as reactions to perceived provocations from Japan. In this case, it was to defend China’s ADIZ against a Japanese intrusion. What Chinese leaders fail to recognize is the self-defeating nature of its behavior. Chinese actions in both the South and East China Seas frighten periphery states, thereby making Abe’s efforts to play hardball with China that much easier.

But this trend is worrisome, because as China engages in more provocative behavior short of war in the East China Sea, Japan continues to match China’s assertiveness. This tit-for-tat behavior leaves room for mistakes that could have disastrous consequences. One need only think of the 2001 EP-3 incident—on steroids.

In 2001, a Chinese J-8 jet fighter collided with a U.S. Navy EP-3 off the coast of Hainan, China. The Chinese pilot was killed and the EP-3 crew was detained and interrogated by Chinese officials, demanding skillful diplomacy to end the confrontation. But that was with the United States. With the Chinese Communist Party not wanting to look weak vis-à-vis its historic rival Japan or cede any ground in its territorial claim, it is hard to imagine an East China Sea version of events ending well where a Chinese pilot is killed in a collision with a Japanese aircraft and Japanese military personnel are detained. The explosive mix of nationalism and historical grievances in China combined with a Japanese leader more willing to take a hard line with China means a mistake on any scale has the potential to spiral out of control.

It is precisely for this reason that Beijing and Tokyo need to wake up and act. It is unlikely that the dispute over the Senkaku Islands—and the accompanying issues over resources, permissible behavior in Exclusive Economic Zones, and airspace sovereignty—will be resolved anytime soon, thereby remaining a potential flash point in bilateral ties. Yet, because the status quo is becoming increasingly risky, it behooves Beijing and Tokyo to take action to manage the situation.

Managing the situation means a number of things. To establish clear rules of the road for their militaries—and thus reduce the likelihood of an unwanted incident—they should sign an Incidents at Sea agreement to structure their interactions and prevent incidents from escalating to conflict. Likewise, they should create a maritime communication mechanism to serve as a hotline for better communication between their respective forces. Japan’s agreements with Russia serve as valuable precedents.

If such bilateral mechanisms prove difficult, perhaps the next best alternative is a multilateral initiative. At the recent Western Pacific Naval Symposium, participating nations—including China and Japan—adopted a Code for Unplanned Encounters at Sea. While not legally binding, it is an agreement of a standardized protocol of safety procedures, basic communications and basic maneuvering instructions to follow for naval ships and aircraft during unplanned encounters at sea. China and Japan should follow up with each other with specifics.

Regardless of their cool relations, China and Japan have an incentive to act. Neither China nor Japan wants a conflict borne out of tactical errors from their military personnel. And given Japan’s military is arguably the most powerful on China’s periphery, and that Japan is working to get ASEAN states to coalesce against Chinese aggression at the same time, it is making important security changes that enable it to stand up to China. This means Beijing has an increased incentive to manage the dispute with Tokyo. After all, it is essentially fighting a two-front battle against a gradually unifying set of periphery states. But, in the end, managing the volatile situation in the East China Sea requires both capitals to make efforts. If Tokyo and Beijing fail in this regard, the future will be filled with more Shangri La Dialogue-type diatribes and East China Sea aerial provocations—or worse.