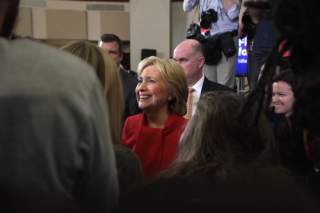 Hillary Clinton enjoys a long record on foreign policy as a senator, a presidential candidate in 2008, and a secretary of state during the first term of the Barack Obama administration. Now, as the presidential nominee of the Democratic Party, she is articulating a revised foreign policy doctrine, one which both builds on her previous views and incorporates adjustments made during the current campaign.

This electoral season has already demonstrated that in this era of globalization, international issues—trade, terrorism, immigration and others—often shape domestic politics in a decisive fashion. Donald Trump and Bernie Sanders upended the expectations of the political establishment by recognizing in a profound way how large segments of Americans perceive these questions. Clinton has had to adapt in response. She has thus arrived at a doctrine composed of the following elements:

U.S. Global leadership. Particularly since 9/11, Clinton has been a centrist on foreign policy, taking positions to the right of President Obama. Clinton believes that international stability and progress require the United States to lead, sometimes echoing the sentiments of her husband who in his second Inaugural Address famously described the U.S. as standing alone “as the world’s indispensable nation.” She has been unequivocal in articulating support for the U.S.-led alliance structures in Europe and East Asia formed after World War II and her belief America has a central role in catalyzing progress on major global issues like climate change. She views the alliances with developed democracies as the foundation for projecting American influence, which she sees as a positive force in the world. She has remained true to this liberal-internationalist credo during the campaign.

Globalist agenda. Clinton remains loyal to Obama’s policies of global economic integration. She continues to defend expanded free trade in principle, though under the current campaign’s political pressure she has pulled back on support for the Trans Pacific Partnership and equivocated in her views on the North American Free Trade Agreement. As secretary of state, she was an advocate of larger development-assistance budgets. Her support of the Obama climate-change agreements means she is willing to see Americans bear a disproportionate economic burden, at least in the near term, to address this threat. Her advocacy of the military intervention in Libya demonstrates a willingness to wage a war for humanitarian objectives, detached from a direct connection to U.S. security and economic interests. She also believes in the use of military to achieve diplomatic goals.

Support for a permissive immigration regime. Clinton’s support for legalization of illegal immigrants, both those who crossed borders illegally and those who overstayed visas, is not paired with proposals to enhance security at the border or in the visa process. Her campaign talking points say little about immigration enforcement, and she endorses Obama’s executive actions to limit the scope of deportations. She also advocates allowing 65,000 Syrian refugees into the United States and is silent on how to respond to potential large-scale movements of migrants in the future. What she calls her comprehensive immigration-reform program focuses almost exclusively on legalization and citizenship for illegal immigrants, although she does (like President Obama), favor expelling those who have committed crimes.

Engagement with great and adversarial powers. As Obama’s secretary of state, Hillary Clinton embraced and implemented a national security strategy including engagement with adversaries and hostile powers. She designed the “reset” with a Russia led by President Dmitry Medvedev, which entailed early concessions on missile defense in Europe and in the New START agreement. These concessions went largely unrequited as President Vladimir Putin later adopted aggressive policies toward Ukraine. She sought a “new kind of great power relations” with China, even soft pedaling U.S. human rights concerns. China’s assertiveness in the East and South China Seas, limited response on North Korea’s nuclear program, cyber espionage and intellectual property theft, and economic mercantilism remained unresolved. Regarding Iran, Clinton supports the nuclear agreement, with its uneven verification provisions and restrictions on enrichment activities that lapse over time. While she continues to describe China as part friend and part adversary, she has taken a hard confrontational line against Putin’s Russia, including calls to provide lethal military assistance to Ukraine.

Confronting radical Islamism and terror. When I served as U.S. ambassador to Afghanistan, I met Hillary Clinton as part of congressional delegations. She showed a sophisticated understanding of the issues and a genuine passion for the risks to the Afghan people, and particularly Afghan women, if the Taliban and other extremists came to power. Yet, as part of the Obama administration, she was unwilling to speak of the threat of radical Islamist movements in those terms. Her efforts at State—programs designed to “counter violent extremism”—did not explicitly address the radical Islamist challenge. Nor did they amount to a sufficiently robust approach to countering extremists ideologically. Now, she is talking about Islamic extremism but she has not yet outlined a strategy for confronting this challenge beyond emphasizing the need for an intelligence surge and defeating ISIS. Important questions remain unaddressed, such as what to do with states that support extremism and terror like Pakistan, how to end the Iraqi and Syrian civil wars that feed extremism and terror, how to nurture improved relations between the Sunni Arab states and Israel because of their common opposition to ISIS and Iran, and how to strengthen ties with traditional allies and quell regional rivalry and proxy warfare between regional powers in the Middle East.

Skeptical on nation building. While Clinton supported the use of force to topple regimes in Afghanistan, Iraq, Libya, and Syria, she has not taken a clear stand on what is needed in the post-conflict phase. In Afghanistan she supported an enduring commitment and programs for state building. In Iraq, she ultimately went along with Obama’s decision to disengage from Iraq against the advice of top military leaders, which combined with the civil war in Syria contributed to rise to the Islamic State. As the driver of the Libya operation, she undertook no effective measures for reconstituting the political order and security after Qaddafi, resulting in Somalia-like chaos. Even President Obama has conceded that this was a mistake. In Syria, she urged an incremental increase in involvement through arming proxies and air strikes but without developing a campaign plan and identifying the needed resources to achieve a reasonable end state. As a result, unsuccessful U.S. interventions in Libya and Syria have damaged our prestige and left swaths of the region in turmoil, with important effects on the region and beyond—increased terror and extremist problems in Europe and enhanced Russian role in the region.

Given the unpopularity of nation building among the American public and the lessons of Iraq and Afghanistan, comprehensive large-scale nation building effort are unlikely for the foreseeable future. But there is a need for state building in post-conflict areas if are to avoid the need for U.S. occupation and control of those territories or the rise of new terrorist groups. Assisting in institution building is best done multilaterally, with the U.S. playing a leading role. Clinton has not expressed herself on this issue—and is unlikely to do so because she may not see any political upside to it.

Status quo on defense spending and forces. Clinton stresses the value of “smart power,” which calls for diminished reliance on military hard power and greater use of political and economic soft power. This was appealing during the unipolar moment of American power in the 1990s. However, is it the right mix and do we have the right force structure for the coming years given the rising challenges of today’s world, which is seeing the adoption of adversarial strategies and the development of increased military capabilities by Russia and China and a number of regional powers?

Clinton’s support for the architecture of U.S. commitments in Europe, East Asia, and the Middle East is encouraging because she understands that the U.S. role in the world has produced a prolonged period of great power peace. She sees the unique ability of the United States to unite and lead the world’s democratic powers and that the U.S. role as the ultimate guarantor of the balance of power in key regions is crucial to maintaining peace.

Nevertheless, the shifts in her policies, partly to remain loyal to Obama and partly to attract Sanders supporters, have created a gap between her goals and aspirations and the means she advocates to achieve them. This gap was evident when she called for military intervention in Libya without state building even if on smaller scale than Afghanistan and Iraq. It is evident now as she temporizes about the ideological component in the fight against radical Islam, and fails to address the need for stepping up defense and international affairs spending. She embraces ambitious goals but is unwilling to accept the need for the required means. In practice, this means her policies may be inadequately resourced and consequently fall short of the mark.

Clinton faces a difficult challenge: the globalist agenda is out of step with significant portions of both political parties. She is now defensive on free trade, and has not found a way to articulate how, if elected, she would counter mercantilist trade practices and currency manipulators. Without such a balance, she would risk further deepening the disillusionment with trade among a large segment of the American people. The need for her to articulate an approach to leveling the playing field in trade remains.