The End of India's Secular Experiment? 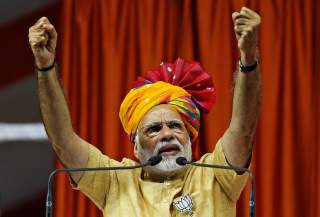 The recent assembly elections in Prime Minister Narendra Modi’s home state, Gujarat, have confirmed what astute observers of the Indian political scene have been predicting for some time: India’s experiment with secularism seems to be in its final stages.

The victory of Modi’s Hindu nationalist Bharatiya Janata Party (BJP) in Gujarat is just one face of this phenomenon. The BJP has scored several victories in recent state elections, the most spectacular of them in India’s largest state of Uttar Pradesh earlier this year, where a fervently anti-Muslim Hindu priest has taken over as the state’s chief minister. Therefore, its victory in Gujarat, which it has ruled for twenty-two years, is not a surprising event and part of an established pattern.

The main reason for the increasing pessimism regarding the future of secularism in India is not the BJP’s vindication in Gujarat of its electoral staying power, but the abject ideological surrender by India’s grand old party, the Indian National Congress, and its open adoption of a Hindu nationalist aura in order to compete with the BJP on the latter’s terms. This may have helped Congress to garner a few more seats, but it blurred—indeed obliterated—the ideological distinction between the BJP and Congress.

Since independence in 1947, the defense of secularism, meaning pluralism, fair treatment for religious minorities and communal inclusiveness, had been an essential part of the Congress Party’s political platform. Even if its deeds fell far short of its rhetoric, secularism had become a marker that divided Congress from the majoritarian Hindu nationalist BJP. For seven decades, Congress had projected itself as an umbrella party defending the virtues of an all-embracing polity and, at least in theory, upholding the separation of religion and state. This image now lies in tatters, and its implications for the future of India are likely to be much more far-reaching than the BJP victory in Gujarat.

Throughout the election campaign in Gujarat, Rahul Gandhi, who was the principal campaigner for Congress and has recently donned the mantle of party president, attempted to project the image of a devout Hindu leader, visited and prayed at innumerable Hindu temples, and continually emphasized that he was a “Shiva Bhakt” (a devotee of the Hindu deity Shiva). Not once did he or any senior leader of Congress utter the word “secularism” or emphasize the secular and inclusive character of the Indian polity in order to distinguish the Congress Party from the majoritarian nature of its competitor, the BJP. The Muslim minority, normally a vote bank for Congress, was totally sidelined by the party during its campaign in Gujarat.

It was apparent that Congress’s electoral strategy was based on the dictum, “If you can’t beat them, join them.” It deliberately and publicly adopted a policy of “soft Hindutva,” against the hard or aggressive Hindutva (“Hinduness”) ideology of the BJP. While this strategy may have paid it some dividends in Gujarat, it has meant that Congress has lost the primary marker of its identity, and has now become a pale imitation of the BJP. Despite its makeover, it did not only lose the electoral contest for Gujarat. More importantly, it surrendered the core ideals of the Indian independence movement.

This should not come as too much of a surprise to keen observers of India. Since its pre-independence days as an anticolonial movement, Congress had always included a strong streak of Hindu nationalism, which has now reasserted itself. Even Mahatma Gandhi used Hindu religious terminology, such as Ram Rajya (rule by the Hindu deity Ram), to describe the postcolonial future of India where justice would rule.

This soft Hindutva could be differentiated from the hard Hindutva of the chauvinist groups, such as the Hindu Mahasabha and the RSS, the parent organization of the BJP, because it did not directly attack the Muslim minority as anti-national. Nevertheless, it assumed without saying so that Indian nationalism was a derivative of Hindu identity.

There were only a few leaders within Congress—foremost among them India’s first prime minister, Jawaharlal Nehru—whose notion of secularism was based on a clear distinction between the religious and political arenas, and the exclusion of religion as far as possible from the public sphere. Since Nehru was the predominant political figure during the first three decades of independence, his notion of secularism was seen abroad as the authoritative definition of the idea within India.

In reality, it was not so. Nehru’s secular rhetoric was but a veneer behind which the Indian political elite tolerated, indeed facilitated, the increasing intrusion of religion into public life. While in theory this meant providing space for all religions in the public sphere, in practice it amounted to the spread of Hindu vocabulary, imagery and symbolism in public life.

This was bound to happen in a country where four-fifths of the population is Hindu and where people of all religions tend to emphasize their religious identities. In the absence of genuine secular stalwarts like Nehru—he died in 1964—who could stem the Hindutva tide, demographics saw to it that the state’s equal distance from all religions remained a pipe dream. Historically, therefore, the Congress Party’s ideology was built on a compromise that accommodated soft Hindutva while formally paying obeisance to the idea of secularism and the state’s equal distance from all religions. It was this genuflection before the idol of secularism, even if half-hearted, that gave Congress its distinctive inclusive image both at home and abroad.

Congress finally shed this façade in the run-up to the recent Gujarat elections. This is the first election in independent India where the undisputed leader of the Congress party, Rahul Gandhi, has made every effort not only to demonstrate his Hindu credentials, but also to emphasize his upper-caste Brahmin lineage. Jawaharlal Nehru, a rationalist and a humanist par excellence, would have turned in his grave had he witnessed his great-grandson flaunting his religious and caste identities so cavalierly during the campaign in Gujarat.

It appears from hindsight that this was inevitable, and indeed the culmination of a trend witnessed since the 1980s. Overt Hindu nationalism, of both the hard and soft types, had been gaining greater legitimacy in India since the early 1980s, when Prime Minister Indira Gandhi tried to play the Hindu card to shore up her sagging legitimacy. The demolition of the 450-year-old Babri mosque in 1992 by Hindu mobs, which was openly egged on by BJP leaders while the Congress government in New Delhi remained a mute spectator, was a forewarning of things to come. The anti-Muslim pogrom in Gujarat in 2002, which led to the massacre of hundreds of members of the minority community in three days, under Chief Minister (now Prime Minister) Modi’s watch, was the most gruesome preplanned episode reflecting the rise of Hindutva.

The more recent killings of Muslims in various parts of the country by vigilante groups alleging without proof that their Muslim targets were either killing cows or eating beef have also sent the message that India is now a majoritarian polity with minority rights, and indeed minority lives, increasingly at risk. The ghastly murder and burning of a Muslim man recently in Rajasthan, a state neighboring Gujarat, epitomizes the message.

India will continue to hold elections, and parties may still alternate in power because it has become a part of the political culture of the country. However, there are strong indications—Congress’s surrender of its secular image in Gujarat being the latest and the most important—that the essence of liberal democracy, including the constitutionally mandated protection of minority rights and an inclusive definition of nationhood, will be missing from this mix. The India of the future is likely to be a majoritarian, electoral democracy, and not much more.