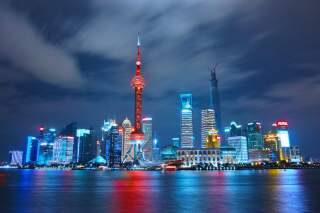 Editor’s Note: Excerpted and used by permission of Yale University Press, from The End of The Asian Century by Michael R. Auslin. Copyright © 2017.

I am hunched over, almost on my hands and knees, nearly 250 feet below ground. Behind me is close to a mile of tunnel, hewn through solid rock. In front of me is a steel door set into a concrete barricade. Through its tiny window I can see another barricade and steel door, maybe another one hundred feet ahead. Beyond that lies North Korea.

I have crawled into one of the dozens of “tunnels of aggression” dug by the Pyongyang regime into South Korean territory. Discovered in 1978, it lies only twenty-seven miles from Seoul and was designed to bring waves of North Korean saboteurs and special forces under the heavily defended border to wreak havoc in case of war. It is the only tunnel open to the public, and the tour buses that bring visitors to this no-man’s-land pass by hills that still contain hundreds of land mines aimed at stopping an invasion from the North.

Yet as much as Tunnel Number Three is a reminder that the Korean border, the ironically named “Demilitarized Zone,” remains one of the most dangerous spots on earth, it also is a metaphor for all of Asia. While dynamic and peaceful on the surface, the continent is riddled with unseen threats, from economic stagnation to political unrest and growing military tensions. These risks also threaten the rest of the world, thanks to the extraordinary economic, political, and military growth of Asia over the past decades.

To put it starkly, what we are seeing today may be the beginning of the end of the “Asian Century.” For decades, prominent and knowledgeable observers, from bankers and industrialists to scholars and politicians, have predicted the rise of the Asia-Paciﬁc and an era of unparalleled Asian power, prosperity, and peace. At the same time, many writers assure us that the East is replacing the West, in a great shift of global power that will permanently reshape our world. All those predictions now are themselves at risk.

Such a view remains controversial. Only in recent months have the popular press and casual observers begun to worry about growing risk, from China’s stock market collapse to the danger of armed conﬂict in the South China Sea. But in a world where headlines continue to focus on the bloody spread of the Islamic State or on Russia’s invasion of Ukraine and intervention in the Syrian civil war, only cursory attention is being paid to Asia’s dangers.

As this is being written, China’s economy has dramatically slowed, North Korea claims that it has a hydrogen bomb and is widely believed to be able to put nuclear weapons on top of ballistic missiles, Thailand’s military has launched its second coup in a decade, and Chinese newspapers warn that war with America is “inevitable” if Washington does not back down from opposing China’s territorial claims in the South China Sea. These are just some of the more visible dangers that perturb the Indo-Paciﬁc. We are on the cusp of a change in the global zeitgeist, from celebrating a strong and growing Asia to worrying about a weak and dangerous Asia. For all its undeniable successes and strengths, the broader Indo-Paciﬁc region faces signiﬁcant, potentially insurmountable challenges.

The rest of us should worry because none of these problems threaten only Asia. Whether one cares about the Indo-Paciﬁc or not, it is half of our world. Today, one out of every three persons on earth is of Chinese or Indian descent, and the countries of the Indo-Paciﬁc account for nearly 60 percent of the world’s population. The World Bank estimates that the economies of Asia produce nearly 40 percent of total global output, and they are central to everything from weaving textiles to crafting the most advanced electronic technology. The militaries of Asia’s countries have grown dramatically, and China, India, and North Korea are nuclear powers. Democracies jostle with authoritarian states as neighbors in the world’s most dynamic region.

But the globalization that we continue to celebrate has its dark side as well. If an economic or security crisis erupted in Asia, it would reverberate around our increasingly interconnected world. Those risks are festering, some visible, others still hidden. The number one priority for the countries of the Asia-Paciﬁc, and the rest of the world, over the coming decade is managing and mitigating the risks that threaten the Asian Century.

To properly conceive of these trends, one must imagine a “risk map” of Asia. Unlike a traditional geographic map, this map is a conceptual tool for identifying the most important trends in the region and assessing their risk. This book maps out five discrete yet interrelated risk regions.

The first such region is the threat to Asia’s growth from the end of its economic miracle and the failure of reform. Thousands of headlines and dozens of books continue to proclaim the economic miracle as if it were destined to last forever. Yet dig beneath the headlines, and you find major problems, many of which national governments are failing to solve.

From Japan to India, the nations of Asia struggle to maintain growth, balance their economies, and fight slowdowns. For most of these countries, the days of high-flying growth are long over, while for others, they never began. It is past time for the rest of the world to pay attention to the threats to Asia’s economic health. Uneven development, asset bubbles, malinvestment, labor issues, and state control over markets are just some of the features of economic risk in the Asia-Pacific. And because Asian economies are increasingly interlinked, problems in one country spill over to others.

This region of Asia’s risk map, economic slowdown or collapse, directly concerns non-Asian nations. Global stock markets tanked in the summer of 2015 and the beginning of 2016 when China’s stock exchanges collapsed. Even if Asia’s economies manage to muddle through, the world must ask what will happen to global trade and investment if growth in Asia simply cools off. It is increasingly prudent to prepare for a far less economically energetic Asia than we are used to. And we must account for both long-term structural stagnation, as in Japan, and the style of house-of-cards capitalism currently practiced in China. There is little doubt that the world must prepare for a China whose growth has dramatically slowed if not stagnated, and for mature economies like Japan’s never to recapture their former vibrancy. As for the developing states, the risk is that they will never attain the growth needed to ensure the modernization of their societies.

Economics, being about people and wealth, leads us directly into the second region of Asia’s risk map: demographics. All of the Indo-Pacific faces a Goldilocks dilemma: either too many people or too few. I once visited Tokyo right after spending nearly a month in India; I received a palpable culture shock in going from a seething kaleidoscope of people in Delhi and Calcutta to the rapidly aging Japan.

Most of Asia’s developed countries, including Japan, South Korea, Taiwan, and Singapore, are facing or will soon face unprecedented demographic drops. China’s one-child policy and horrendous environmental pollution will also bring a population decline in the world’s most populous nation, at a time when the country is not yet rich enough to deal with the resulting dislocation. On the other hand, India has a growing surfeit of young people and needs to improve educational standards, expand its urban and rural infrastructure, and find them all jobs. Much of Southeast Asia is in India’s situation, offering opportunity along with challenge.

The costs of Asia’s rapid modernization have long been ignored, foremost among them environmental damage. The polluted skies and waters of Asia affect demographics as much as do fertility rates. The horrors of Japan’s Thalidomide babies during the 1950s may seem a relic of another era, but images of the darkness of Chinese cities at noon, thousands of dead pig carcasses floating down major rivers, and towering garbage heaps reveal the almost inconceivable environmental harm that now threatens the future of youth in some of Asia’s major countries. Demographics will put enormous pressure on Asia’s domestic political and economic systems; understanding this is a must for understanding risk in the region.

The third enormous region of risk on our map comprises Asia’s unfinished political revolutions, in both democracies and autocracies. How political leaders respond to economic and social challenges will ensure domestic tranquility or produce civil unrest. Ever since the last Chinese emperor left his throne in Beijing’s Forbidden City, Asia’s political his- tory has been one of unfinished revolution.

Given the ongoing struggle for the political soul of Asia, Americans should not be complacent about the future of democracy there. The fight is far from over. Hundreds of millions of men, women, and children have been freed from oppressive governments but have not completed their journey. The gains of democracy continue to be put at risk by corruption, cliques, protest, cynicism, and fear of instability. The spread of democracy, which has succeeded so well in recent decades, may be reaching a limit—how temporary is impossible to say. Even mature democracies, like Japan and India, face a crisis of political confidence and a “political arthritis” that leaves vital problems unsolved.