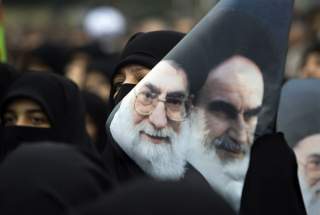 When announcing the United States’ unilateral withdrawal from the Iran nuclear agreement, Donald Trump rationalized his decision as one that served the aspirations of Iranians to live in peace and prosperity. “[T]he future of Iran belongs to its people. They are the rightful heirs to a rich culture and an ancient land, and they deserve a nation that does justice to their dreams,” the President said. However, taking a sober glance at the ramifications of his decision offers a very different outcome for the “proud nation of Iran.” Trump’s decision actually helps push Iran into more authoritarian waters—both domestically and geopolitically—while eclipsing Iranians’ hope for a better future.

Economically, the re-imposition of U.S. sanctions targeting Iran’s financial system and oil sales will strengthen the hand of Tehran’s hardliners. As legal channels of trade become illegal once again, Iran’s shadow economy will flourish as it did under Presidents Bush and Obama’s “crippling sanctions” regime. Semi-state entities affiliated to the IRGC and the conglomerates operating under the name of religious foundations are believed to control the majority of Iran’s economy. These businesses and organizations will be able to use their black channels and secretive methods to import needed goods. As a result, these black market groups will extract outrageous profits from ordinary Iranian due to elevated prices. In addition, such smuggled goods and price gouging will push back against Iran’s infant private sector. This is bad because it was precisely the possibility of an increasingly transparent banking sector in the wake of the Rouhani Administration’s dealings with Europe that was a thorn in the side of those entities’ political-economic dominance.

It is true that these very semi-state and state entities did benefit almost exclusively from the Iran deal’s economic dividends. For instance, there was the repatriation of billions of frozen assets which filled Tehran's pockets and invested in its expansionist regional policies. However, since much of that money has been spent, some hardliners believe there is no longer any benefit to staying in the deal.

Politically, the Rouhani administration was humiliated by Trump’s decision. Iran’s hardliners associated with the Islamic Revolutionary Guards Corps (IRGC) and Supreme Leader Khamenei now have an easy time denouncing the administration’s alleged naïveté and ultimate failure to extract the desired benefits from the deal. The hardliners feel vindicated to have continuously warned against America’s unreliability. Also, with the government weakened and the hardliners ascendant, the IRGC might extend its dominance in the armed forces, the intelligence apparatus, the judiciary, and the economy onto the political system. Ever since the uprising at the turn of the year talk of a “semi-military government” has been heard more clearly in Iran. The prospect of the re-imposition of sanctions has helped create an record fall of the Iranian currency, leading to rising prices and declining demand, triggering important protests and strikes over these past days among traders, with Tehran’s Grand Bazaar even closing down. The deepening of the country’s economic crisis over the last few months has intensified élite debate among various political quarters about the possibility of a military coup d’état as a last resort to avoid the country’s collapse and chaos. In fact, the Trump Administration’s policies and its “regime change” rhetoric might thus constitute a midwife for such a daunting development in Iran.

Iran’s geopolitical orientations: Look to the East—or a look at Europe?

Geopolitically, Tehran might end up reviving the Ahmadinejad era’s “Look to the East” policy, by getting closer to Russia and China economically and politically. This would also include forging a political-economic authoritarian alliance between Iran’s hardline ruling establishment and those powers, as for instance embodied in the Iran–China Chamber of Commerce and Industries (ICCCI). Such an eastward orientation would also result in skyrocketing trade volume between those autocracies, with Iranian markets again flooded with cheap Chinese products to the detriment of Iran’s domestic production and jobs. However, even Iran’s hardliners cannot afford to turn a blind eye to the West as a whole. Hence Khamenei has appealed to Europe to help save the nuclear deal, perfectly knowing that Europe has been instrumental in funneling money and political prestige to all of the Islamic Republic’s élite.

When the economic and political fallouts are combined, it is likely that the same dynamic that unfolded during the Bush administration years will repeat itself. The power gap between Iran’s authoritarian state and civil society is set to increase after it stagnated is the post-deal period, this time around serving a regime that has lost much of its legitimacy. During the 2009 Green Movement, an important section of the middle class called into question the political system’s legitimacy. However, now during the 2017/2018 uprising, Iran’s middle-class poor—conventionally considered as the regime’s social base— as well as the youth displayed an unprecedented popular rage against all factions of the regime. Despite the lack of media coverage, the protests have continued on multiple fronts and in innovative forms, combining deep-seated socio-economic and political grievances, aided and abetted by Iran's socio-economic misery, political authoritarianism, and environmental disasters. With these conditions prevailing, there will be more protests and strikes, but their crackdown will be easier this time as the regime will label protesters and dissenters as stooges of Trump's alleged regime-change policy. Furthermore, such claims by the regime will also be easier given that U.S. National Security Advisor John Bolton has openly sympathized with the totalitarian Iranian opposition cult, the Mujahedin-e Khalq. In fact, just recently it was announced that Iran's judiciary and security bodies would "resolutely confront" protesters on national-security grounds for alleged cooperation with U.S. and Israeli agendas.

With the return of harsh sanctions likely to further impoverish Iranian society—half of which already lives around the poverty line—political activism may turn into a luxury fewer people can afford. In other words, Trump’s decision not only comes at a time when the Islamic Republic faces the most formidable challenge in its almost forty years of history, but it ultimately plays into extending its survival. In other words, the Trump Administration’s hope that its new Iran policy will trigger an implosion of the Islamic Republic is unlikely to turn into reality.

Crucially, Trump’s undermining of the nuclear deal aborted the much-needed time for Iranian groups opposed to the Islamic Republic to organize in the wake of the uprising. Iran’s domestic opposition includes the middle class demanding democracy and the lower class demanding social justice. Neither the domestic nor exiled opposition groups have been able to overcome their fragmentation and to formulate a joint program or manifesto for political action. Trump effectively killed this historic window of opportunity for them.

Trump’s move thus constitutes a disservice to Iranians’ aspirations on all fronts imaginable. As a result, their socio-economic and political misery is likely to deepen, while Iran moves closer to a militarized ruling system.

In his withdrawal speech, the President also said: “It has now been almost 40 years since this dictatorship seized power and took a proud nation hostage." As all of these factors combine, the repercussions will be just the opposite of Trump's guess on the future of Iran. Instead, the Islamic Republic will more easily be able to continue doing everything Trump has complained about.

Dr. Ali Fathollah-Nejad is a visiting fellow at the Brookings Institution’s Doha Center and an associate with the Iran Project at the Harvard Kennedy School’s Belfer Center. He is also an associated researcher at the Free University of Berlin and the Université libre de Bruxelles. He also has an upcoming book, Iran in an Emerging New World Order: From Ahmadinejad to Rouhani, New York: Palgrave Macmillan.