The End of the Petrodollar? 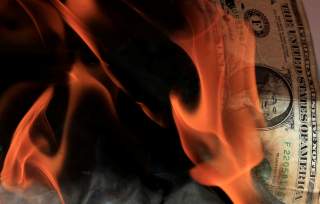 In a move that could portend massive shifts in the global oil game, the Shanghai International Energy Exchange will soon unveil an oil-futures contract denominated in Chinese yuan rather than U.S. dollars (product symbol: SC). Experts warn that the growing clout of Chinese currency in international financial markets could erode the primacy of the U.S. dollar, a long-term economic trend that should greatly trouble Washington.

The International Energy Exchange conducted a final set of drills to test trading, settlement, and quote transmission back in December. China’s Securities and Regulatory Commission has announced that the crude-futures contract will launch on March 26.

The new benchmark is so significant because it directly challenges the dollar-dominated pricing scheme of crude oil markets—commonly known as the petrodollar system—which helps to undergird the dollar’s status as the international reserve currency. That arrangement dates back to 1974, when Saudi Arabia and other regional oil suppliers, in exchange for sustained U.S. military aid and equipment, agreed to exclusively accept the Greenback for oil sales and—perhaps most importantly—to invest their oil revenues into U.S. treasuries.

This process, often referred to as “petrodollar recycling,” is a win-win for all involved: oil-rich states enjoy a safe place to store their petro-profits, and the United States gains a key source of financing for its deficit spending. With few exceptions, any country wishing to purchase oil must first obtain U.S. dollars, creating a significant demand for the currency in international markets. Thus, the petro-dollar also plays a critical role in generating global confidence in the dollar. And in currency markets, confidence is king.

The widespread pricing and trading of crude in yuan, or the petro-yuan, would shake this global confidence and simultaneously serve a number of strategic purposes for the People’s Republic. The Chinese government has long sought to internationalize the yuan, also known as the RMB, to boost its economic power and reduce its dependence on the dollar. As the world’s largest crude oil importer and primary source of investment capital for oil-producing nations, China would naturally benefit from using its own currency over that of a geopolitical competitor.

The Chinese Communist party understands, however, that a strong currency is a double-edged sword for the world’s largest export economy. Indeed, China has been accused by many in the international community—including President Trump—of currency manipulation, or the economic policy of devaluing the yuan to gain a trade advantage. While the case for such manipulation was clear a decade ago, recent data reveals convincingly that China has slowly but surely allowed the yuan to appreciate in value.

As China continues to pursue an assertive foreign policy under its powerful president, Xi Jinping, the yuan’s regional influence is sure to follow. Beijing’s ambitious One Belt One Road initiative—which seeks to create trade networks across the Eurasian continent and Middle East—will invigorate the yuan’s march toward internationalization. China could also use its leverage over key oil exporters to force the adoption of the Renminbi in energy trade. Middle East producers such as Saudi Arabia and the UAE have watched their market share fall to U.S. shale, and are desperate for access to the world’s most dynamic energy market. Furthermore, the persisting low-oil price environment may leave them with little choice if Beijing insists on settling its oil contracts in yuan.

So does China’s new benchmark pose a real threat to the dollar’s oil hegemony? Not yet. The dollar will not cede its dominance in oil markets any time soon, especially as U.S. crude oil output reaches all-time highs. Even a Saudi decision to also conduct oil trade in yuan would not be enough to unseat the petrodollar. Beijing’s penchant for market intervention and strict capital controls make the yuan a less attractive option than the Greenback to foreign-energy producers. Instead, China is likely to build confidence in the yuan gradually, through steady economic growth, proactive foreign engagement, and the inevitable liberalization of its monetary policy.

That, in turn, could signal trouble for the petrodollar in the future. After all, the U.S. dollar may seem unassailable now, but as the Chinese proverb says, “Dripping water pierces a stone.”

James Grant is a Junior Fellow at the American Foreign Policy Council in Washington, DC, where he focuses on energy security issues.