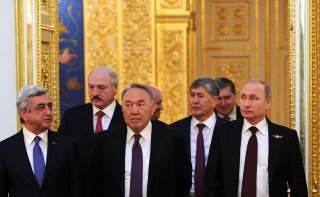 The new year began with serious contradictions among members of the Eurasian Economic Union (EAEU), Russia’s regional integration project that aims to unify the former Soviet republics into a single economic and political space. As the U.S. secretary of state, Hillary Clinton called the Eurasian Economic Union Russia’s attempt to restore the Soviet Union. To date, that union includes just five states: Armenia, Belarus, Kazakhstan, Kyrgyzstan and Russia. Each of the members came into this integration unit to implement their own narrow national objectives. Russia is trying to create an alternative to the European Union, which successfully promoted the “neighborhood” policy and Eastern Partnership, offering associate membership to post-Soviet countries. In other words, Moscow is trying to institutionalize its influence in the Eurasian space, collecting fragments of the collapsed Soviet empire.

Kazakhstan, which has the longest common border out of all Russia’s neighbors, wants to gain a foothold in the region as a serious political and economic player. In addition, for Astana, Russia is an attempt to find a balance against the growing influence of China. Armenia has no land borders with any of the countries of the EAEU. Moreover, its economic and trade relations with Russia are carried out through neighboring Georgia, as its western and eastern boundaries are blocked by Turkey and Azerbaijan. Thus, Yerevan sees the EAEU solely in terms of strengthening military and political relations with Russia. Belarus and Kyrgyzstan, meanwhile, are trying to gain economic and financial dividends from Russia and Kazakhstan for their internal needs.

In general, there are serious political, economic and civilizational conflicts among the member states of the Eurasian bloc. For instance, Kazakhstan is also a member of the “Turkic Council,” which includes Turkey and Azerbaijan—Armenia’s historical adversaries. Official Astana is actively lobbying for pro-Turkish and pro-Azerbaijani interests in the framework of the EAEU, limiting Moscow’s ability to provide one-sided support to Yerevan. Thus, at the request of Kazakh authorities, the summit of the Eurasian Intergovernmental Council was moved from Armenia to Russia. This decision was made in Astana, in order not to annoy Baku. Belarus holds a similar position, and is interested in strengthening and expanding its political and economic dialogue with Azerbaijan. Belarus’s President Aleksandr Lukashenko supported the initiative of Kazakhstan’s leader Nursultan Nazarbayev to move the summit from Yerevan. Besides that, Minsk and Astana are artificially delaying the appointment of Armenia’s representative to the post of secretary general of the Collective Security Treaty Organization, the Eurasian military and political bloc.

It should be noted that the positive dynamics in relations between Russia and other members of the Union (except Kazakhstan) also depend on Moscow’s capacity to exercise financial support and provide soft loans. For a long time, Moscow has forgiven its allies’ debts, given huge loans and provided substantial grant financial support. However, in view of its own difficult economic situation, Russia can no longer give money to partners in the Eurasian Economic Union. The latest conflict between Russia and Belarus once again exposed serious problems within the union. For a long time, Belarus has been Russia’s main strategic and civilizational ally. The countries signed an important agreement on the “union state,” which turned Russia and Belarus into a single trade and economic space. Belarusian citizens, compared with residents of other former Soviet republics, have great opportunities in Russia.

In Russia, Belarus is often called Moscow’s “younger brother.” On this basis, Minsk has often resorted to blackmail tactics, demanding more economic and political privileges from its “elder brother.” Moscow got used to this blackmail, satisfying President Lukashenko’s requests again and again—until Minsk’s behavior became more than just petty manipulation. The cooling of relations between the “brothers” began after the president of Belarus spoke of “brotherly Ukraine” fighting for its independence. Russians saw this as a statement of hostility; some politicians in Russia believe that Lukashenko made such statements to convince the West that Belarus is not an alien state. A few days later, Russian state media reported that Belarus might withdraw from the Eurasian enterprise. The sources also noted that Moscow would not reassure Belarusian authorities if they made such a polarizing decision.

Without the consent of any other members of the Eurasian Economic Union, Belarus introduced visa-free entry for citizens of eighty countries, including thirty-nine European countries as well as Brazil, Indonesia, the United States, Japan and others. Meanwhile, there is a free movement regime between Moscow and Minsk, which means that foreigners who arrive visa-free in Belarus can freely enter Russia. In turn, Moscow issued a decree about establishing controls on the boundary with Belarus. The decree stated that this decision was made in order to “create the necessary conditions for the protection of the state border of the Russian Federation.” In addition, the regional border guard must set the place and time for the entry of people and vehicles into the border zone, and organize the installation of warning signs. Russia, which has no financial instruments to calm its allies, resorted to a tougher policy, seeking to discipline its “younger brother.”

In general, the Russian-Belarusian conflict is only in its early stages. If the parties fail to come to an agreement, the Eurasian Economic Union will gradually disintegrate. However, today it is clear that this integration model has no chance of success. One major problem is that today there is no unified and coherent picture of Eurasian integration. There are no clear answers to such questions as who and why needs this integration, and what positive changes it can bring to member countries in the future. In addition, we must remember that today in the countries of the Eurasian project, young people—in their early twenties—are actively getting involved in social and political life. Their outlook and views were formed after the collapse of the USSR. Therefore, the younger generation sees these integration projects with equanimity—and those who studied in the West do not perceive Eurasian integration as a natural choice.

Areg Galstyan, PhD, is a regular contributor to Forbes, the American Thinker and the Hill. Follow him on Twitter: @galstyan_areg.