The FAA Could Follow the EPA in Overreaching Its Authority 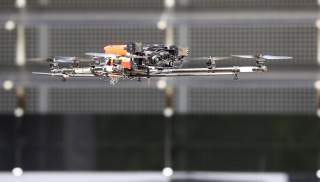 Even as conservatives cheer the Environmental Protection Agency’s decision to rescind its overreaching “Waters of the United States” (WOTUS) rule, another expansion of the administrative state is taking shape. Call it the “Airspace of the United States” rule. As we wrote last year, the Federal Aviation Administration (FAA) sees drones as cause to seize control of all airspace above private property, right down to the ground.

Both Congress and the Trump administration should ask, why retire the WOTUS rule only to approve a new, potentially more intrusive expansion of the regulatory state?

This is no mere hypothetical. As early as 2014, Jim Williams, then head of FAA’s Unmanned Aircraft System Integration Office, said “quadcopters . . . have extended the national airspace down to the ground.”

Federal regulations have historically laid out that the navigable airspace begins at 500 feet, above ground level, except near airports and other critical infrastructure, or in unpopulated rural areas. Congress has never codified this figure. Instead, federal law sets out that the “navigable airspace” is “the minimum altitudes of flight prescribed by regulations.”

Some within and outside of the FAA assert that drones require that those regulations be changed. The FAA claims that a one-pound drone is an “aircraft” legally indistinguishable from a Boeing 747 (imagine if the National Highway Traffic Safety Administration sought authority over remote control cars by claiming they were the same as semi-trucks). With so many new “aircraft” buzzing around, some say, the agency has no choice but to grow its mission.

In United States v. Causby (1946), the U.S. Supreme Court declared that manned aircraft left “no place in the modern world” for the ancient doctrine that one’s property interest extends all the way up to the heavens. Yet the Court continued, “If the landowner is to have full enjoyment of the land, he must have exclusive control of the immediate reaches of the enveloping atmosphere.”

Now, the FAA challenges that exclusive control as Congress debates exactly how much power the FAA should have over private property all across the country.

One camp would grant the FAA’s wish to control all airspace down to the blades of grass. Last month, the House and Senate introduced FAA reauthorization bills that would leave the door open to a future regulatory “land grab” whereby the FAA takes virtually absolute preemptive control over low-altitude airspace. These bills would severely restrict tribal, state and local governments’ authority to address local concerns about drones.

On the other side, Sens. Richard Blumenthal, D-CT, Tom Cotton, R-AR., Dianne Feinstein, D-CA, and Mike Lee, R-UT, introduced the Drone Federalism Act to allow reasonable local, state and tribal regulations in airspace below 200 feet. Rep. Jason Lewis, R-MN, introduced a similar bill in the House titled the Drone Innovation Act. This camp recognizes that drone innovations do not require us to abandon the first principles of property rights and federalism that have protected liberty and fueled competitive markets for over two centuries.

Both camps recognize that the FAA must establish rules and guidelines for safe drone operations, and ought to retain full control of airspace near airports, above federal land and facilities, and where needed to protect a clear federal interest.

But only the advocates for federalism foresee the danger in letting any agency determine the limits of its own power.

In 1972, Congress enacted the Clean Water Act to keep the nation’s “navigable waters” clean. Heritage legal scholar Paul J. Larkin, Jr. argues that term reasonably describes “continuously wet” bodies of water that are in fact used for “transportation” and other public activity. But it strains credulity to call a creek trickling through a family’s yard in Fort Bridger, Wyoming, a national navigable water.

Nonetheless, in 2013, Andy Johnson built a state-permitted stock pond using his small creek. Once complete, the Army Corps of Engineers and then EPA employees came inspecting. They eventually demanded that the Johnsons destroy their pond or pay millions in fines. The EPA settled with the family without fining them only after a costly two year legal battle.

Sadly, we have come to expect such disastrous results when dealing with the vast, distant, and unaccountable bureaucracy of the EPA. It is a perfect example of what happens to innocent people when any agency is permitted to expand its own power and authority, unchecked.

Should we now permit the FAA to follow in the EPA’s footsteps?

The consequences of full federal preemption in low-altitude airspace would be immediate and significant. Federal law holds that every “citizen of the United States has a public right of transit through the navigable airspace.” Those wishing to prevent neighbors from flying drones mere feet above backyard sunbathers or family dinners would quickly discover they cannot sue for trespass because their airspace property rights have been dissolved.

If that drone were to become threatening, they could not call the police, either, because, the FAA has made it entirely unclear whether local law enforcement has jurisdiction over “aircraft.” The only option would be to appeal to regulators who may be too distant and too few in number to deal with the countless conflicts sure to arise between drone operators and the people around their flight paths.

Federal preemption would leave little, if any, role for individuals and communities in setting rules to govern how commercial drones operate among their houses and businesses. Would anyone take seriously an argument that, because FedEx is engaged in interstate commerce only the U.S. Department of Transportation can set speed limits for delivery trucks, and only the U.S. Marshals can pull them over? Of course not. Yet that is the claim being made by some regarding drones.

Regulatory overreach is unlikely to remain confined to setting routes and speed limits for drones. Among its many vital duties, the FAA determines whether structures “200 feet above ground level (AGL) or higher, or near an airport” pose “a hazard to the airspace”; and sets “lighting and marking standards . . . to reduce the impact on migratory bird populations” and aircraft.

With new authority stretched all the way to the ground, might FAA employees begin to see tall trees, barbecues, flagpoles, and baseballs as hazards to the airspace, birds and aircraft?

If that sounds absurd today, remember that the EPA stretched the term “navigable waters” to include vast swaths of bone-dry land through the WOTUS rule. The FAA has already stretched the term “aircraft” to include drones; arbitrarily exercised its newfound authority to shut down drone businesses; and unlawfully required recreational drone owners to register themselves on pain of civil and criminal liability, including a maximum three year federal prison sentence.

Before authorizing it to repeat the EPA’s mistakes, lawmakers should contemplate why two-ton cars are state licensed and locally policed, but two-pound drones require the abrogation of private property rights, full federal control of airspace down to the ground, and ever-greater expansion of the administrative state.

Image: A firefighters drone is pictured during a drone workshop in Berlin, Germany June 27, 2017. REUTERS/Hannibal Hanschke