The Fall of the Berlin Wall: A Forgotten Part of the Story 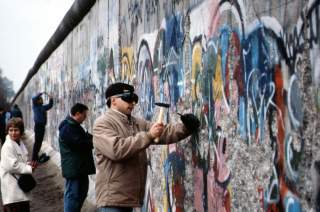 Twenty-five years ago, the opening of the Berlin Wall transfixed the world, but somewhat obscured a bigger story: the peaceable seizure of the state by that part of East German society that did not want to go to the West.

Everyone recalls that massive crowds across the German Democratic Republic (GDR) chanted “Wir sind das Volk!” Actually, they shouted “Wir bleiben hier! Wir sind das Volk!” (“We are staying here! We are the people!”) Rather than emigration, they sought to transform their country.

For decades, the GDR had used exit permission as a political and social control mechanism, expelling dissidents, systematically selling political prisoners and others to West Germany for hard currency and regulating foreign travel and emigration among different parts of society. This carefully modulated technique prevented the buildup of opposition.

In 1989, the technique was overwhelmed, as thousands of East Germans swarmed West German embassies in Prague and Warsaw or found a way to Hungary, which had opened its border with Austria. This was a massive challenge to regime power, but not to the integrity of the system itself.

Quite contrary was the message of the increasingly-large but always peaceful demonstrations: “We are staying here. Why should we leave? This is our country. We are staying here. We are the people.” The GDR had never faced anything of the kind and possessed no remedy other than massive use of force, which some of the leadership wanted to employ. Fortunately, the demonstrators and police both worked to avoid a bloodbath, while cooler heads prevailed at the top.

The abrupt opening of the Berlin Wall was, in essence, a desperation measure to deflate this opposition, but it failed. Most who visited West Berlin returned to maintain the pressure for fundamental political reform. This came as a shock in East Berlin, but also in Bonn, Moscow and Washington.

Remember that when President Reagan spoke before the Berlin Wall in 1987 he called on Soviet leader Gorbachev to tear it down. As it happens, I wrote the first draft of that speech in the State Department, proposing that Reagan should speak directly to the people of the GDR (in a noninflammatory way) rather than to Moscow. Predictably, that text was dismissed by the White House, which regarded the East German populace as unimportant. Later, Gorbachev was startled and helpless when people in the GDR took events in hand. Whatever the Soviet leader’s great achievements, tearing down the Berlin Wall was not among them.

Gorbachev had, perhaps unwittingly, conjoined in mid-1986 with the aging and out-of-touch GDR leadership to communicate to the East German population what needed to be done. Gorbachev publicly favored reform in the GDR. In contrast, the state and party leadership in East Berlin remained adamantine in its rejection of Gorbachev’s glasnost, proclaiming, “You don’t change your wallpaper just because your neighbor does.”

East Germans had always assumed that reform in their country was constrained and even prohibited by the Kremlin. Now they saw that—like for Poles and Hungarians—their future lay in their own hands, if they could grasp it. This recognition came in conjunction with an economy lurching toward terminal crisis while poisoning the air, land and water to the point that young families did not want to raise children in such conditions. Applications for exit permission soared, but more important was the birth of mass determination to achieve popular sovereignty.

What ensued astonished observers in the West and East, because it conflicted with the stereotypical image of the GDR as the last place in the Soviet bloc where fundamental change could occur, least of all from the streets. In reality, East German society was dynamic, well informed and very ready for change. Leaders of the opposition were keenly aware of the success of peaceful “people power” in the Philippines, but of its tragic failure in China, and behaved accordingly. Their goal was not foreign travel, but accountable governance. The Wall was an important but secondary issue.

The triumph of 1989 defied every scenario of the Cold War. The credit lies less with those East Germans who had given up on their country than with the many thousands of ordinary citizens there who insisted: “Wir bleiben hier! Wir sind das Volk!”

E. Wayne Merry was a US diplomat and is now a Senior Fellow at the American Foreign Policy Council in Washington, DC.