The Fall of the House of Bush 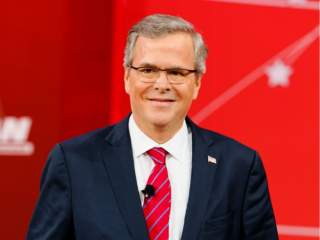 Jeb Bush is a nice guy. So is his brother, George W. Bush. Their father, George Herbert Walker Bush, is a particularly nice guy. It’s a nice family. But at the presidential level, they all have been failures. Much of what’s wrong with the country today—and some of what’s wrong with the world—can be placed at their feet. Jeb’s exit from the Republican nomination battle on Saturday puts an end to the so-called Bush dynasty, and that can’t be bad for the Republic.

Begin with Herbert Walker Bush, the forty-first president who succeeded Ronald Reagan. He was a good man and certainly well prepared for the job. No crisis-level problems occurred during his watch—no ongoing domestic disturbances or deep recessions or foreign debacles or serious scandals. He scored some significant triumphs, including his Panama incursion to remove the corrupt and menacing Manuel Noriega from his seat of power there; the Americans with Disability Act, which codified certain civil rights for handicapped persons; and—most notably—his consummate military victory in the first Gulf War. Further, the Soviet Union collapsed on his watch, and while Reagan’s policies contributed most to that outcome Bush managed the transition with measured deftness.

But the most significant element of his leadership was his rejection of Reaganism, which had produced a significant political success for the fortieth president, but which many of those around Bush considered foolish. When I covered the Reagan White House in the 1980s (and by extension the Bush vice presidency), I developed an impression that many Bush people considered Reagan to be a bumbler whose bumbling ways would end when they took over. His ways did come to an end when Bush pushed aside both the policies and rhetoric of Reagan-style conservative populism. He declined to position himself as a champion of working-class Americans beset by growing difficulties in making ends meet. His only serious growth issue was a call to cut capital gains taxes, an initiative he pushed with intermittent enthusiasm.

What’s more, he reneged on a solemn political commitment he made to the American people on national television at the GOP convention in 1988: “No new taxes.” When pressed by the usual budget-balancers, he assured the country, he would put his foot down with the words, “Read my lips; no new taxes.” But his lips proved malleable, and he did raise taxes. In doing so he led his country into a recession just as he was preparing his reelection campaign.

Reagan had accumulated an annual average economic growth rate of 3.86 percent—a powerful performance, particularly given the recession of his early first term. Bush’s average annual growth rate was below 1 percent, including a negative 1.55 percent in the recession year of 1991. Those numbers, themselves politically debilitating, also had a significant effect on the budget deficits of both presidents. You can’t balance the budget with a stagnant economy.

This is the kind of performance that leads to one-term presidencies. First, though, it generated a serious challenge for the nomination in 1992—in the unlikely person of political commentator and former White House official Patrick Buchanan, who pulled nearly 38 percent of the vote in the New Hampshire primary and went on to collect 2.9 million votes in subsequent contests. This was a stunning political rebuke to a sitting president. Then Texas billionaire Ross Perot ran as an independent presidential candidate. He collected 19 percent of the popular vote and sealed Bush’s fate as a one-termer. These kinds of challenges don’t emerge against strong presidents.

Given all this, it’s difficult to avoid the word “hapless” in describing Bush’s White House performance. He not only projected no vision for the country and its future, but he defiantly refused to even consider any merit in the concept. He was an “in-basket” president who dealt with what came his way but didn’t seek to initiate much change. History suggests that dynamic and innovative presidents have a higher chance of reelection—and history’s favor—than status quo executives. Bush was a status quo executive.

Recent years have witnessed an effort on the part of some commentators and historians to revise the Bush image upward. In a 2011 New York Times column entitled “Bring Back Poppy,” Thomas L. Friedman extolled the elder Bush’s presidency and lamented the passing of his brand of moderate and “prudent” conservatism. He called Bush “one of the most underrated presidents.” Jon Meacham, the Pulitzer Prize–winning biographer, recently produced a probing biography of the elder Bush that was designed to buoy his standing in the presidential pantheon. It was a sensitive and poignant portrait of a good man, but it isn’t likely to alter Bush’s place in history, which will be influenced more by the fact that he lost the trust of the American people and was thus discarded after a single term.

Perhaps Bush himself captured his place best when he told Meacham, “I feel like an asterisk… lost between the glory of Reagan—monuments everywhere, trumpets, the great hero—and the trials and tribulations of my sons.”

The trials and tribulations of George W. Bush turned out to be trials and tribulations for his nation. Princeton historian Sean Wilentz, writing in Rolling Stone in 2006, suggested the younger Bush appeared “headed for colossal historical disgrace.” He added, “And that may be the best-case scenario. Many historians are now wondering whether Bush, in fact, will be remembered as the very worst president in all of American history.”

Exhibit A, of course, is the Iraq war. In taking his country into that conflict, Bush failed to meet the two fundamental tests of presidential war making. One was the James Polk lesson: Ensure that no one can ever make an accusation that the president dissembled with the American people in order to get permission to spill American blood. The other was the Lyndon Johnson or Harry Truman lesson: Ensure that the country doesn’t get bogged down in a war it can’t win and can’t end. Avoiding these ominous pitfalls would have required a sober and solemn assessment of all the risks and dangers of the enterprise, both military and political. There is little evidence that Bush conducted such an assessment before his war decision.

Bush devised a rationale of how he would pull off his military victory that can only be described as delusional. He was going to make Iraq hospitable to Western democratic institutions, and the resulting stability would ensure the success of the military enterprise—and serve as regional example and beachhead for similar Wilsonian initiatives throughout the Middle East.

The jury is now in. The entire Middle East has been horrendously destabilized, with the Islamic State (ISIS) controlling vast amounts of territory, from which it pursues its aim of making war upon the West. Failed states abound—Syria, Libya, Yemen. The region is headed toward a regional war of sectarian passion, with Sunnis and Shia at each other’s throats. Iran is more powerful than ever, with the traditional counterweight to his influence, Sunni Iraq, destroyed.

Many neocon apologists for Bush seek to attribute all this to Bush’s successor, Barack Obama, and it can be maintained that Obama has not brought a coherent strategic sensibility to his Middle East policy making. But the man most responsible for this mess was George W. Bush.

The war also contributed to a faltering U.S. economy, as war costs generated mounting budget deficits that the president seemed to regard with blithe unconcern. The national debt, which had been steadily paid down under his predecessor Bill Clinton, shot back to ominous proportions. Meanwhile, economic growth rates began a steady decline culminating in negative growth in the 2008 campaign year. And, of course, the Great Recession, stemming from an ominous bubble in real estate prices that the Bush administration largely ignored, contributes further to his standing in the eyes of his contemporaries, just as it will in the eyes of history.

That’s a lot of damage to the country from this so-called dynasty. Then, along comes Jeb. The country is rent by deep animosities. The immigration issue is tearing the nation apart, but politicians in Washington don’t want to talk about it. The government is dysfunctional. Congress can’t operate as it’s supposed to. Social and cultural issues eat away at the body politic. The national debt is soaring toward ominous levels. ISIS is on the move. American foreign policy is characterized by mushiness and inconsistency. The nation cries out for presidential leadership.