The Fantasy Plans to Remove Donald Trump from Office 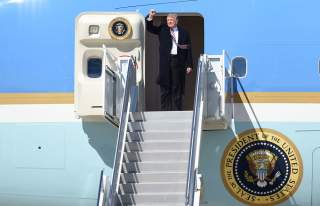 There are some writers who shouldn’t be allowed to watch TV, and the New Republic’s Jeet Heer is surely one of them. Commenting on the possibility that Donald Trump could be replaced as president by Mike Pence, Heer declared on Twitter with tongue firmly out of cheek that the “worst case scenario under Pence is The Handmaid’s Tale (theocratic totalitarianism). With Trump it’s Mad Max (nuclear apocalypse).” And here I was just thinking that George W. Bush’s administration was straight out of Nineteen Eighty-Four and Barack Obama’s presidency was the scientific tyranny in C. S. Lewis’s That Hideous Strength. Comparing oppressive dystopias to presidencies you find unpalatable is nothing if not a mark of cleverness.

Still, even if the apocalypse isn’t nigh, the political tumultuousness of the past week has left most of us in prematurely hot Washington reaching for that extra summer ale. Donald Trump’s firing of James Comey, the alleged leak of classified information to Russian envoys, obstruction-of-justice accusations—we’ve had a lot to sift through. Meanwhile, Joe Lieberman is now rumored to be leading Trump’s sweepstakes to replace Comey as FBI director, which would place the vehemently anti-Russian former Connecticut senator in charge of investigating Russian meddling in our election. And House Majority Leader Kevin McCarthy has been caught on tape jesting about Vladimir Putin paying Donald Trump, which Congressman Dana Rohrabacher later defended by comparing it to a joke he’d once made about flatulence killing off the dinosaurs.

Understandably, this mayhem has elicited an equal and opposite reaction in some pundits. At the New York Times, the normally phlegmatic Ross Douthat advises that we invoke the Twenty-Fifth Amendment, whose Article 4 allows the president to be removed from office if he’s found “unable to discharge the powers and duties of his office.” That criterion applies to Trump, Douthat argues, because he’s a witless toddler. Setting aside the amendment’s high threshold—the vice president, a majority of the cabinet, and two-thirds of Congress must consent—Douthat’s plan would be, as Charles C. W. Cooke notes, a coup against the electoral will. And since Trump has never been diagnosed with any mental health ailment, invoking the Twenty-Fifth now would make its precedence so elastic as to be applicable anytime a president is judged to have behaved childishly. That’s a dangerous road to go down.

Congressman Al Green, Democrat of Texas, favors a more familiar route. He recently gave a speech on the House floor demanding that Trump be impeached. “I rise today with a heavy heart,” he began, which is what politicians always say right before they achieve ideological euphoria. Green cited the Comey sacking as reason to strip Trump of his powers immediately. Credit him with thinking realistically, at least relative to Douthat. While the Twenty-Fifth Amendment was intended for presidents who are in poor health, impeachment is the constitutional remedy for wrongdoing. It also comes with plenty of precedent, having been last drawn upon only nineteen years ago. Still, the House must pass each article of impeachment by a majority, and then two-thirds of senators must vote to convict the president; that’s not going to happen with Republicans in control of Congress.

So we’re left with a special counsel. (Ironically, unlike Douthat’s and Green’s more extreme solutions, the special-counsel law is probably unconstitutional. It usurps law enforcement powers reserved for the executive and deposits them in a de facto fourth branch of government.) Robert Mueller will sift through the memos and interview the witnesses, but in the meantime I’d like to make a prediction: Donald Trump will not be impeached or otherwise removed from office. He’ll serve out his term, after which the decision to keep or remove him will be assigned to his real kingmakers: the voters in America’s swing states. They elected him precisely because they had an appetite for political destruction, and barring any (thus far nonexistent) criminality, the full four years must now be seen through.

There still exists the possibility that Trump’s bosses in Ohio and Wisconsin could return him for a second term. The reason that’s more likely than zero isn’t that the electorate necessarily approves of the president’s conduct; it’s that none of the alternatives to Trump have absorbed the lessons of his election. Trump triumphed on a message that the political class is too disruptive, too cosseted, too contemptuous of heartland values. Cut to the Democratic National Committee, currently embroiled in a row over whether pro-lifers should be expelled from its party, while its leadership spans the spectrum from Clinton toadyism to Nation of Islam apologism, and radioactive identity politics lives on.

The problem is greater than just the Democrats. CNN continues to cover the Russia probe and the opioid epidemic at a ratio of about seven hundred thousand to one. Even Trump’s putative Republican allies can’t seem to write a health-care bill without importing half of it from the insurance lobbyists up the street. Washington, forever admonishing others against “looking inwards,” has refocused on itself with the intensity of the Hubble Telescope. Yet our only serious means of ending this political crisis is to be found in the very flyover country we’re neglecting in favor of trying to end this political crisis. Now there’s a dystopian plot twist!