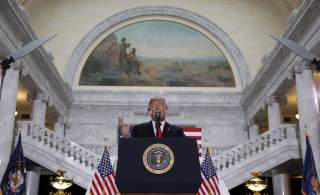 President Trump routinely cloaks his presidency in claims that his actions are “the best” or “the biggest” whether they are or not. His inauguration crowd and his proposed tax plan were not the biggest ever.

With his recent decision to eliminate protections for two million acres of Bears Ears and Grand Staircase-Escalante national monuments in Utah, however, President Trump can truthfully lay claim to a superlative. He has now attempted the largest rollback of protections for public lands in U.S. history.

Like national parks, national monuments are intended, by law, to be protected forever. But, President Trump signed two proclamations earlier this month attempting to repeal protections that past presidents bestowed on tens of thousands of Native American archaeological sites, wild redrock canyons and dinosaur bones.

The courts must now decide whether President Trump has the power to break one of America’s oldest and proudest conservation laws, the 1906 Antiquities Act, and—in so doing—desecrate a shared commitment to protecting the nation’s natural, cultural and historic heritage.

The courts must not only step in to defend the rule of law, but they must step in quickly to prevent the imminent destruction of timeless archaeological treasures.

Buried in President Trump’s orders to repeal Bears Ears and Grand Staircase-Escalante National Monuments are provisions that allow private mineral companies to begin staking mining claims within sixty days of the ink drying on the new presidential proclamations. In other words—without the intervention by the courts or Congress— these lands will begin to be drilled, mined and permanently destroyed in just two months.

The imminent harm that will befall these places is real and irreversible. In early 2018 mining speculators will be able to take advantage of an antiquated law, known as the 1872 Mining Law, and stake permanent mining claims wherever they see fit and without ever paying a penny to taxpayers.

Bears Ears and Grand Staircase-Escalante national monuments will be subjected to the worst kind of Wild West land grab. Any mining claim that is staked will be grandfathered into any future management plan for the area and will be put ahead of all other uses, including if these lands are protected in the future. In essence, the extractive industry will gain privileged and protected status, while the Native American nations will lose the lands in which their histories, cultures and economies are rooted.

President Trump attempted to justify his attack on America’s national monuments by saying his action would ensure that activities like hunting and ranching could continue and be passed onto future generations. But the national monuments he targeted are already open to hunting, fishing and grazing. And, without conservation protections for these lands, hunters will have a hard time finding big game in a coal mine. Ranchers, meanwhile, will find oil-and-gas fields encroach on long-productive forage lands.

President Trump’s abuse of his authority under the Antiquities Act—taking away a piece of Americana that each American owns and giving it away—sets the stage for a critical court battle.

Nothing less than America’s conservation heritage is at stake. The lawsuit that has been filed by the Hopi, the Navajo, the Ute, the Ute Mountain Tribe and the Zuni—along with separate lawsuits filed by conservationists, sportsmen, businesses and scientists—seeks to uphold the principle that permanent protections are indeed meant to be permanent.

Their arguments are well supported by the law and by public opinion. One hundred and twenty-one law professors argued earlier this year that no president has the power to eliminate or shrink national monuments. Public opinion also opposes the revocation or alteration of national monuments—a record-breaking 2.8 million Americans personally wrote the Interior Department voicing their concerns with Trump’s threatened action.

Ultimately, hundreds of thousands of objects of historic and scientific importance are at stake. So, too, is a uniquely American principle: the idea that national monuments, once established, are protected in perpetuity. If President Trump’s action is allowed to stand, it will undercut local economies that thrive off protected public lands for the tourism and outdoor recreation. It will undermine a commitment that has been honored by every administration since 1906. And it will break a promise to current and future generations that we, as a nation, will safeguard that is which is truly American, truly irreplaceable and truly timeless.

Marc Rehmann is the senior campaign manager for the Law of the Land Project at the Center for American Progress.