The Fight to Control Congress Is About to Get Ugly 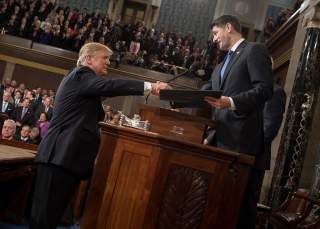 All elections are national.

Democrats and Republicans are still reeling from the shock of the election in November. One party finds itself with a leader they fundamentally disagree with, an administration at war with itself, a hostile minority trying to keep them conservative and an angry populist conservative base demanding results. The other party has no leader, no message and is trying to slow down Trump and an angry base that is pushing themselves back in power.

Both parties face a civil war of ideas, and the left- and right-wing populist bases are taking different paths to get what they want.

Without a defined leader, Democrats have poured all their efforts in winning special elections from the state legislature to Congress. All politics is national to the progressive movement.

Grassroots organizations like the Sister District Project, Flippable, ActBlue and Daily Kos have worked tirelessly to win and compete in every election from coast to coast, raising millions of dollars and countless volunteer hours to keep Republican power in check.

Mother Jones reported that Democrats from as far out as California raised hundreds of thousands of dollars off state legislative elections in Connecticut and Delaware, where Democrats were trying to capture a Republican-held seat in New England and defend one of their own in the First State. They failed at the former but succeed at the later.

At the congressional district, progressives are raising millions with the hopes of having relatively unknown progressive activists win a House seat in a deep red state against candidates coming from the Republican establishment.

Kansas’ fourth congressional district has civil rights attorney and Army veteran James Thompson running against State Treasurer Ron Estes for a seat that went to Trump by twenty-seven points. Progressives seem scared by those odds. About twenty thousand nationwide donors poured $240,000 in a last minute blitz for the political novice causing Republican groups and the NRCC to spend over $100,000 on digital and television ads. Estes managed to edge out Thompson by 6.8 percent on Tuesday’s special election.

The race for Georgia’s sixth congressional district outpaces the other races in terms of fundraising. Jon Ossoff, a thirty-year-old progressive filmmaker, has raised more than $8 million from liberals nationwide. The sixth congressional district seat has been Republican for forty years but has been trending blue, especially as Atlanta Democrats have moved into the surrounding districts.

State law stipulates that candidates of every party run against each other and if none of them get a majority, then there’s a runoff between the top two. With nearly one dozen Republicans running, all polling suggests that establishment candidates Karen Handel or Bobby Gray are likely to face Ossoff in a runoff, but Democrats are trying to prevent a second election from even happening.

Celebrities, activities and party loyalists are working in overdrive to turn out enough Democrats in early voting to push Ossoff over the 50 percent mark in the first round. According to Michael McDonald of the University of Florida, Democrats have gotten more than ten thousand of their own to the polls before Election Day out of 26,717 total early votes.

In all these races, progressive grassroots are facing off against establishment Republicans in seats that favor the GOP, but that doesn’t mean its populist base has exhausted itself.

Faced with a divided administration, “America First” Republicans have done everything possible to hold President Trump accountable to his campaign promises. From pushing the Freedom Caucus to kill Ryancare to creating the Twitter hashtag #FireKushner after it was reported that Steve Bannon may be removed from the administration, grassroots Republicans are trying to affect change within.

With the Jared Kushner, Gary Cohn and Dina Powell wing of the party quickly gaining power and outnumbering the Steve Bannon, Stephen Miller and Wilbur Ross “America First” wing with staffers and appointments, it’s looking like a tall order.

Trump has a fundamental problem: he has a hostile Republican Congress and almost no one subscribes to the “America First” ideology outside of a handful of Senators and House members.

Unless the “America First” brigade can start fielding candidates to win House and Senate seats to push through Trump’s agenda legislatively and progressive Bernie Sanders activists can start winning House seats, both movements that defined the 2016 election will find themselves either without a home or in a hostile marriage with their respected parties.