The Final Comeback of Boris Johnson? 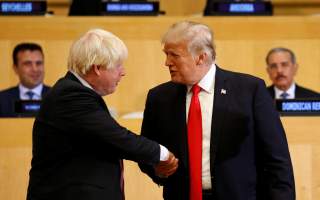 British Foreign Secretary Boris Johnson’s decision to publish a 4000-word treatise on Brexit over the weekend in the UK’s flagship conservative paper, The Telegraph, has the Anglosphere buzzing that he is finally showing his cards, and preparing to challenge Prime Theresa May for leadership.

Johnson, himself a former journalist for The Telegraph, has had one of the most-watched careers in British political history. The former president of the Oxford Union and later London mayor, it has long been thought he’d become prime minister, only to see fellow Oxford Conservatives Theresa May and David Cameron (two years his junior) win the prize first. When the United Kingdom voted to leave the European Union in June 2016—forcing Cameron’s resignation—it was widely thought Johnson would ascend to Number 10 Downing Street, having shrewdly backed Brexit over Cameron’s objections. But the often chaotic Johnson misplayed his hand, with longtime ally Michael Gove betraying him at the final hour, forcing Johnson to scuttle his bid, which effectively handed the prime ministership to May.

“By rights someone with his instincts and record should have been prime minister or at least party leader a while ago,” a former State Department official and keen observer of British politics told me, noting that Johnson, who was on the fence about Brexit (and very possibly only backed it for his own political advantage), nonetheless saw something in 2016 that both Cameron and May did not. But he’s never been able to fully capitalize. So far, Johnson has demonstrated his “cunning in that he can spot these opportunities, and seize them brilliantly. But he can't do anything more than that.”

At least he hasn’t yet. May’s poor showing in the June general election has left her vulnerable for several months. Is Johnson finally trying to pounce? He cast aspersions on such chatter shortly after the disappointing vote this past summer, texting fellow Conservatives that they needed to stay behind the prime minister. But his publishing of what is effectively a shadow manifesto at the very least is meant to undermine May from the outside, pressuring her and more establishment Conservatives to push for a “harder” Brexit, not a so-called “soft” Brexit. “Boris Johnson seeks to re-establish himself as leading Brexitier,” The Financial Times reported on Sunday. “Foreign secretary’s intervention seen as destabilising Theresa May.” The British embassy in Washington, technically under Johnson’s charge, declined to comment for this story.

“It is a shot across her bow to not concede on key points with the negotiations. But it’s also a test to see if will she fire him,” says Tom Rogan, a UK native and commentary writer at The Washington Examiner and former regular panelist on Washington’s McLaughlin Group. “If she did, it would spark a leadership challenge. If she didn’t, it makes her weak and strengthens his hand over the longer term.”

An advisor to the U.S. Navy that works in close coordination with the UK (a key NATO ally), sees an imminent challenge from Johnson as more likely than not. The advisor noted that Jacob Rees-Mogg, in backing Johnson’s manifesto, has plausibly removed himself from the race if Johnson got in. Mogg, a colorful aristocrat and strident Brexitier, has been feted as a possible alternative leader to May in recent months; he may be settling for a cabinet position. Gove, a favorite of Rupert Murdoch, and former UKIP leader have also backed up Johnson since the publishing of the manifesto. “If they’re confident enough to [back this manifesto], they’ll go for it, more likely than not, within a year. You could be seeing a leadership team of Johnson, Gove and Rees-Mogg emerging,” the advisor told me. “Would love to send this conversation back in time five years ago… ‘How is President Trump going to react to Prime Minister Boris Johnson?’”

The former State Department official is more skeptical: “Johnson is, a, buffoon! And I don’t think he’d be better than May.” Other former State officials are more equivocal. “A big city mayor who is successful in balancing local political constituencies acquires a skill set that can serve him or her well as a foreign minister,” or prime minister, says P.J. Crowley, former State Department spokesman. “Boris Johnson is strongly identified with Brexit. His future success and political legacy, perhaps for the better but far more likely for the worse, is linked indelibly to Brexit.” But for the former official, who spoke only on the condition of anonymity, both are likely pretenders. “May is keeping the ship afloat and Johnson would undoubtedly run it aground, quickly.”

Freddy Gray of London’s The Spectator largely agrees—he thinks Johnson is likely just making noise. “Boris? Not sure he wants to and besides it’s not really his style and he doesn’t have enough friends in the party,” Gray tells me.

Still, this is a watershed moment for Johnson, who had been steadfastly loyal to May after she surprising named him her top diplomat in the summer of 2016 (the then-U.S. State Department spokesman, Mark Toner, couldn’t even contain his laughter when he heard the news in a public press briefing in Washington). “What’s remarkable is how quiet Boris has been since becoming Foreign Secretary and now this,” Gray told me. “There is a Tory war on Brexit and Boris is reluctantly on the more Brexity side—with Mogg—whereas [Home Secretary Amber] Rudd and others are pushing for the more ‘Remain’ version of Brexit, which might not really be Brexit at all, depending on how you see it.”

May, for her part, on Monday noted that the government will continue to drive from the front seat, and not accept back seat sniping, a la Johnson. Rudd, a strong ally of May, noted over the weekend: “I think Boris is an important part of the cabinet, adding enthusiasm, energy and entertainment.” Prominent British spoof account “Larry the Cat” noted of the quote on Twitter: “What the Home Secretary has described here is a labrador, not a Foreign Secretary.”

So what if Johnson actually ascended to power? Clay Clemens, a professor of European politics at the College of William & Mary, thinks he and the other hard Brexitiers need to be more transparent with the public on what leaving the EU is going to look like. “If Boris thinks he can get a deal allowing internal market access without a divorce bill, it’s up to him to put a proposal out there. He is foreign minister, at the moment, after all. But there is almost no chance the EU will go for it. At some point the Brexitiers really ought to own up and say they are willing to go cold turkey, with WTO terms, and be done with it—the zero tradeoffs version just isn't there.” Crowley agrees: “The process is far more complex than he projected. The cost to Britain will be far higher than he suggested. That reality will be the elephant in Boris’ room whatever he does going forward.”

Whatever his ambition, Johnson has unquestionably made a move. His entry back into the central arena of British political intrigue, after much anticipation and speculation, almost resembles the wait for a rock star’s new album after many years. Axl Rose once famously mounted a “final comeback.” The foreign secretary is not altogether that much different. The BBC noted Monday that that one of his former colleagues once said of Johnson: “The thing you have to understand about him, is that he wants to be loved.”