The Flat Mind of Thomas Friedman 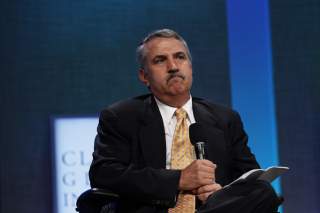 The French statesman Talleyrand famously observed about the Bourbons, “they had learned nothing and forgotten nothing.” Something similar might be said about New York Times columnist Thomas Friedman. Once upon a time he was the avatar of a new age of economic interdependence that would lead to global peace. No two countries that each had a McDonald’s, he wrote, would ever go to war with each other. Then came the Balkans Wars in the 1990s. So much for the flat and interdependent world that Friedman purported to have discovered.

In a column of February 18, Friedman was in familiar form. Which is to say flat earth mode. Once more, his judgments were sweeping and apodictic.  He declared a “code red” on the state of American democracy. “President Trump is either totally compromised by the Russians or is a towering fool, or both, but either way he has shown himself unwilling or unable to defend America against a Russian campaign to divide and undermine our democracy.”

The piece attracted more than 2,700 comments, “a personal record” according to Friedman, who credited the powerful public response to its being “the right column at the right time.” Funnily enough, he wasn’t even supposed to file a column that day. It wasn’t his turn in the weekly rotation. But he was so annoyed by Trump’s tweets in response to special counsel Robert Mueller’s most recent round of indictments that he emailed editor James Bennet to ask if he could file a bonus column, just for the web. “Not my day. Not in print. And it may be the most widely circulated column I’ve ever written,” he told CNN.

It is hard to know what exactly Friedman was so worked up about. It can’t be the Mueller indictments themselves, because nothing in the document released by the Department of Justice on February 17 suggests any collusion between Russians and the Trump campaign, much less Trump himself. It specifically describes the campaign staff who interacted with the paid Russians trolls as “unwitting.”

To make his case that “They [the Russians] may own our president,” Friedman digs up a very old quote from Donald Trump Jr.: “Russians make up a pretty disproportionate cross section of a lot of our assets.” This remark was made in 2008 at a real estate conference in Manhattan. The full quote is: “In terms of high-end product influx into the U.S., Russians make up a pretty disproportionate cross-section of a lot of our assets; say in Dubai, and certainly with our project in SoHo and anywhere in New York. We see a lot of money pouring in from Russia.” Of course, to an audience of New York real estate professionals, the information that there is “a lot of money pouring in” into their market from Russia would have been the opposite of news.

“Why don’t you lead,” Friedman exhorts the president, “not only a proper cyberdefense of our elections, but also an offense against Mr. Putin.” If only it were that simple. The course that Friedman recommends—a global PR campaign to browbeat the world at large with accusations that Putin is a thief, a liar, and a tyrant—would certainly lead to retaliation from Moscow. The very intelligence experts that Friedman accuses the Trump team of blithely disregarding warn that the challenge for the U.S. now is to find a response to Russian cyber-meddling “that is just disruptive enough that it throws off the Russian game, but not so severe that they feel they need to come back heavier.” The course Friedman recommends would not strike that careful balance, to say the least.

In a CNN appearance a few days before his column, Friedman described Russian interference in the 2016 election “a 9/11 scale event … a Pearl Harbor scale event.” But an article in the New York Times published the very same week detailed the long history of American interference in other countries’ elections as far back as the beginning of the Cold War. “Routine” is the adjective the article uses to describe “election meddling by the United States.” If Friedman had read his own newspaper that day, he would have learned that drafting leaflets and campaign posters—or Facebook memes, their modern equivalents—for foreign elections is nowhere near exceptional enough to rise to the level of a “code red,” much less a 9/11 or a Pearl Harbor.

The State Department announced this Thursday that it has approved the sale of 210 anti-tank missiles to the Ukrainian government, marking the first time since the beginning of the conflict that American will send them lethal as well as nonlethal aid. Is President Trump escalating his support for Kiev, risking turning a cold conflict back into a hot one, in order to bolster the line he has used to defend himself against charges like Friedman’s, that “I have been much tougher on Russia than Obama, just look at the facts,” as his February 20 tweet put it? If so, then the conflict that Friedman is laboring so hard to provoke may prove to be a greater threat to America’s interests than any of the trolling that occasioned his latest outburst.

Helen Andrews is a Robert Novak Fellow at the The Fund for American Studies.