The Folly of Lobbying to Carve Up Iraq 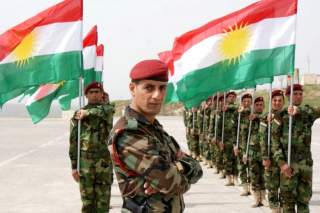 “It was the Kurds,” wrote Thomas Friedman in 2014, “who used the window of freedom we opened for them to overcome internal divisions, start to reform their once Sopranos-like politics and create a vibrant economy that is now throwing up skyscrapers and colleges.”

This has become the popular story of Masoud Barzani’s Kurdistan Regional Government that has circulated increasingly in Washington and London. According to this narrative, Iraq’s Kurds have been long oppressed, but instead of collapsing into internal conflict as many liberated societies in the region do, they have pressed ahead with democracy.

As one Kurdish official recently noted, the Kurds remain steadfast as the West’s ally of choice against Islamic State (ISIS), patiently building relations with their neighbors despite a venal and corrupt government in Baghdad that sabotages every bid they make for financial independence.

This narrative is more than a contentious historical interpretation—it is a PR invention. It was recently reported that the KRG spent almost $6 million lobbying in Washington since 2010, more than Pakistan has spent with its requests for subsidized F-16s and aid. Now that ISIS is weakening, while Baghdad remains broke, the KRG lobbying effort has reached fever pitch, with no fewer than three articles by officials in the Washington Post, Foreign Policy and Britain’s Guardian.

These KRG officials won’t mention that at least a portion of their lobbying budget, if not all of it until the end of 2013, was paid for by Baghdad. This money, along with at least $120 billion in oil revenues since 2003 from the federal government and disputed oil fields, has been used to create a bloated and collapsing public sector, undermining the Kurdish Democratic Party’s claims that the region is mistreated.

In fact, this was never the case, as by 2005 the Kurdish budget had increased from $2.5 billion to $5 billion, all of it in transfers from the central government. So, from the beginning, it has benefited the Kurdistan Region of Iraq (KRI) to stay within the federation, biding its time until (it was hoped) independent oil exports could provide financial independence. Arguably, compared to Basra, the KRI has done fantastically well by Baghdad.

Unfortunately, op-eds by KRG officials capitalize on the limited understanding most outsiders have of Iraq. At the head of these efforts is Masoud Barzani, whose mandate to rule ended in August of last year. Therefore, the Kurdish bid for independence is not currently based on democracy.

Kurdish autonomy has long been based on a division of public funds between dynasties, who crowd out reformist opposition such as the Kurdish Gorran Party. This arrangement has its roots in the division of oil smuggling and customs revenues between the KDP and Talabani’s Patriotic Union of Kurdistan in the 1990s.

Dissent is highly regulated. The KDP has been widely accused by Human Rights Watch and Amnesty International of arresting and intimidating dissenters, murdering journalists and allowing widespread corruption. In October 2015, Reporters Without Borders accused the KDP of unleashing a “wave of terror” on the media, after TV stations critical of the KDP were attacked.

Of course, Baghdad is not innocent of human rights violations, but an overview of Iraqi media shows a landscape of political satire. In fact, the recent “storming” of the Green Zone (most protesters were peaceful and left when told to do so) contrasts markedly with protests in the KRI and demonstrations under Maliki. Five Kurds were killed in protests in October last year.

At the same time, Iraq is not a perfect democracy. But it is one of the few areas of the region that has achieved a delicate democratic transition with inclusive governments. While under threat in Baghdad, this inclusivity now seems to have halted in the KRI.

KDP supporters argue that their region has been a haven for internally displaced people including Yazidis and Iraqi Christians, who have endured appalling oppression at the hands of ISIS. This is true in terms of sheer numbers of IDPs. But Human Rights Watch recently reported how Iraqi Christians in the KRI were stopped from protesting a government land seizure by members of the KDP’s security forces, commonly known as the Asayish.

Meanwhile, in Baghdad there is a camp for Iraqi Christians, not far from the headquarters of the Babylon Brigades, a Christian force in the pro-government Hashd al-Shaabi paramilitary group. This camp receives aid from the organization that run Iraq’s holy shrines. Of course, many Christians have left Baghdad, but this is overwhelmingly because of the resurgence of ISIS in 2014.

Nonetheless, Kurdish officials press on with the narrative of a hopelessly chaotic Arab Iraq and the beacon of tolerance that exists under KDP control in Erbil. KDP officials have lamented Baghdad’s attempt to deny the Kurdish oil that they claim it can rightfully export, suggesting that the Kurds have entered financial chaos purely because of Baghdad.

The first point to make here regards the legality of Kurdish oil exports. In 2014 a court in Texas upheld the government of Iraq’s claim that a Kurdish oil shipment to the United States was illegal. The following year, a UK court also ruled that the KRI cannot claim “sovereign immunity” when it comes to energy matters.

This debate distracts ordinary Kurdish people from the pressing issue of rapid and far reaching economic reform in the KRI. Again, it should be pointed out that Baghdad needs reform urgently, but it is wrong to continue the story of Erbil’s incredible economic diversification and the chaos of a failed Baghdad. Kurdistan has accrued almost $20 billion in debt, an impressive amount for a region of just 5 million people. This has strained Erbil’s supposedly excellent contracts with international oil companies, as the KRG has struggled to pay on time for those companies’ contracted work.

As with the government in Baghdad, ministries have been used as political hiring schemes. In 2008 the State Department noted that the Kurdish Ministry of Agriculture had over thirteen thousand employees, while the equivalent institution in California, a state with a population of 38 million, had under two thousand employees. This is why the region is short almost $400 million per month: because the public sector payroll is a staggering $700 million.

Kurdish officials still assert that because they did not receive the full allocation of cash from Baghdad, they had no choice but to export oil unilaterally. In fact, the KDP were making deals with Genel Energy as long ago as 2002, when the Turkish-British company first signed a deal for Taq Taq oil field. Later deals appear to have been between the KDP and international oil companies, so it is questionable whether these deals have been made on behalf of Iraqi Kurds.

For example, officials from the KRI’s Ministry of Natural Resources came under scrutiny in 2009 for their close relationship with DNO, who were fined $188,000 by the Oslo Stock Exchange following allegations of insider trading. One official came under scrutiny again a year later for his relationship with Heritage Oil, to whom he awarded a contract and in which he then bought shares.

Currently, the KRI is struggling to borrow because it is not a sovereign entity. But while the KDP is in charge, potential lenders should be wary. Last year, it was noted that of sixteen bank accounts for oil revenues from independent exports from the KRI, only one is under the control of the Minister of Finance, which contained less than $20 million, while the other seventeen are under KDP control.

These uncomfortable facts do not deter the lobbyists. So, the Kurds are “the antidote to ISIS,” while Baghdad is a shambolic failure in terms of corruption and shaky commitment to democracy. Meanwhile the story gets repeated that the Iraqi army has failed to defeat ISIS, which was 2014’s headline. That last point no longer applies to an organization that has retaken Ramadi and has now reached the static Kurdish frontline at Makhmour. KRG lobbyists still complain that Baghdad was not transferring them U.S.-delivered arms, a claim then publicly refuted by the U.S. “Special Presidential Envoy for the Global Coalition to Counter ISIL,” Brett McGurk.

Over a year after Thomas Friedman’s article about the miracles in Erbil, his tone had changed. In March, he wrote of the Kurdish region, “Just trying to figure out the differences among the Kurdish parties and militias in Syria and Iraq — the Y.P.G., P.Y.D., P.U.K., K.D.P. and P.K.K. — took me a day.”

Even if we put aside the factional complexity of an essentially broke region that has just seen its estimated oil reserves massively downgraded, we must also consider the factions Baghdad is trying to control in disputed territory in the flashpoints of Tuz Khurmatu and Kirkuk. It is here, where pro-government groups in the Hashd al-Shaabi have clashed with Kurdish peshmerga, that politicians from Baghdad and the Kurdish region have been meeting to coordinate a peaceful arrangement.

This is how Iraq can go forward: through serious negotiations between politicians who have a long relationship going back to the 1992 opposition conferences. Emotional lobbying campaigns that distort facts (for example, conveniently forgetting the KDP’s bizarre alliance with Saddam Hussein in the mid-nineties) serve nobody’s interests except the KDP. More than ever, Iraq needs the international community to help with negotiating a peaceful resolution to issues such as disputed territories.