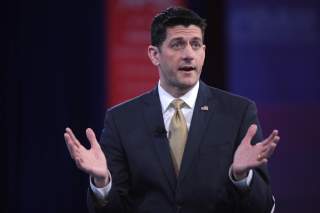 That House Speaker Paul Ryan has decided to push this border-adjustment corporate tax plan is truly a mystery. He must know its drawbacks compared to other, simpler reform proposals. He must also know that such a plan will evoke retaliation from U.S. trading partners and, at the very least, drag Washington into extended proceedings at the World Trade Organization (WTO), which, in its turn, would very likely rule against it. Given the extent of opposition in the Senate and within his own caucus in the House, Ryan is risking political capital on a losing proposition. Worst, this proposal muddles the opportunity for the United States to secure much-needed tax reform.

Supporters of this plan offer it as a substitute for other reform proposals. The proposal originally offered by the White House would have brought much needed simplicity to the code by sweeping away the maze of breaks, credits and exclusions it presently contains and using the subsequent flow of revenue to reduce statutory tax rates for all businesses. Trump claims that his plan would allow the statutory rate to fall from 35 percent to 15 percent. Rather than something this straightforward, Ryan’s border plan, instead of sweeping away breaks, would replace them with a new one that favors exporters. And because it gives a benefit to this one group, it must impose a 20 percent tax burden on everyone else.

Ryan has pitched this plan to the Senate and the media as an answer to export advantages that, he claims, other countries give. Like the United States, these others rely for revenues on corporate income taxes. But unlike this country, they also rely on value added taxes (VAT). These impose a levy on the value added at each stage of production. What bothers Ryan is that they rebate the VAT to exporters, giving them, he has argued, a competitive advantage that his border-adjustment tax aims to answer. While his logic is reasonable as far as it goes, it is not apparent why the United States must contort its tax code and force domestic sellers and buyers to subsidize exporters just because others do. A fairer way to help U.S. producers compete is to tax all at the lowest possible rate.

Border taxes, apart from importing inequitable practices from abroad, have still more fundamental problems. For one, they create a new complexity in the tax code. The main criticism of the present code is the damage done by its complexity. It forces companies to bear the cost of endless numbers of accountants and tax lawyers they would not need if the code were simpler. Worse, the blizzard of breaks, credits and exclusions prompts business managers to pitch their decisions to signals in the tax code instead of the economics of what they do. Reform arguments for years have pointed out how this circumstance makes business less efficient and effective and so less capable of competing globally or taking advantage of growth opportunities. It is primarily for this reason that reformers are keen to do away the breaks. Now, the border-adjustment tax— though it would erase other breaks, credits and what have you—would impose a new one of its own and, in so doing, impose a politically inspired direction on business decisions instead of allowing managers to follow underlying economic signals.

Nor is it apparent that the border tax would benefit the economy in other ways. Though it might help struggling exporters, the relatively high tax burden it would otherwise have to impose on others would keep up relative costs throughout the domestic economy and hold down living standards. What is more, the jobs and production saved at those struggling exporters might fail to provide a net positive for the economy. After all, the need in this scheme to keep other tax costs higher would penalize many more firms that sell domestically, perhaps severely enough to make them less viable and, accordingly, force them to cut back relatively on output and employment.

Promoters of Ryan’s plan dismiss such concerns. They argue that, once in effect, the scheme would push up the foreign exchange value of the dollar, relieving such relative cost burdens by reducing the dollar cost of imports to American consumers and producers. Of course, such a currency move would also raise the global cost of American products and diminish the benefit of the export subsidy in the plan. It is strange enough to argue for a policy by claiming that market action would erase its effects. What is worse is how these proponents miss the other damage such a dollar appreciation might cause. Because much of the world’s public and private debt is denominated in dollars, a magical appreciation in the currency is substantial, and would make it harder for all these borrowers to meet their obligations. Poorer countries would suffer especially, as they gain revenues in their own currencies but have disproportionate trillions in dollar-denominated debt outstanding. The subsequent failures and downgrades could destabilize financial markets generally, including in this country.

If these economic and financial repercussions were not reason enough to abandon this proposal, there is the question of retaliation. At the very least, U.S. trading partners would challenge the policy at the WTO. Since it is an open question how the WTO would find, American business would labor under uncertainties for the extended time of the adjudication. And while they remained uncertain, they would also remain timid about expansion plans, keeping the pace of economic growth and hiring slower than otherwise. If the WTO were to rule against Washington—not unlikely—that uncertainty would extend further. For this country would not defy the WTO but instead would need to work out a new scheme.

Worst of all, this flawed proposal risks spoiling the best chance in years for this country to get desperately needed tax reform. Right after the election, many in Congress and out of it noted how Trump’s straightforward proposal contained the same elements as past tax reform proposals, from both sides of the aisle, in fact. With the Democrats not unsympathetic and Republican majorities in both houses, the sense was that, at last, Washington could replace the country’s dysfunctional corporate tax code with one that is simpler and more equitable, one that would encourage efficiency and growth. Now Ryan and other House Republicans have muddled the matter, putting this golden opportunity at risk. Why ever would Ryan, a long-time proponent of more effective tax reform, do this?

The greatest hope for the best tax reform lies in a quick turn to the Trump White House’s original proposal. Comfort resides in the words of Senate Majority Whip John Cornyn who, in response to Ryan’s proposal, has urged Congress “to look for another option.”

Milton Ezrati is a contributing editor at the National Interest, an affiliate of the Center for the Study of Human Capital at the University at Buffalo (SUNY), and recently joined Vested as its chief economist. His most recent book, Thirty Tomorrows, describes how the world can cope with the challenges of globalization and aging demographics.