The Folly of Sending More U.S. Troops to Afghanistan 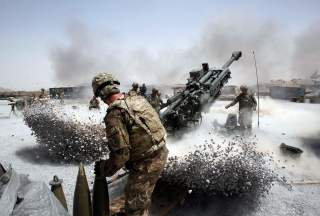 Clearly, the war’s impact is significant. But how is it that Washington still does not have an achievable strategy? And worse, why aren’t elected officials debating and voting on policy?

The top commander in Afghanistan, Gen. John Nicholson, has requested an additional five thousand or so soldiers, and it seems that four thousand have been granted by Defense Secretary James Mattis and President Donald Trump. General Nicholson is a graduate of the U.S. Army’s premiere school for planners, the School of Advanced Military Studies, and the National Defense University. Only the best and brightest military minds are sent to these schools. So his request for additional forces, one might presume, is well thought out and bound to deliver the victory that has eluded America for the past fifteen-plus years.

To paraphrase the plan: more U.S. troops will assist in training more recruits to replace the Afghan army’s losses over the past two years, as well as assist in increasing the professionalism and capability of existing Afghan forces. In addition, the U.S. will provide more forces to increase counterterrorism efforts against any resurgent Al Qaeda, ISIS or Taliban elements.

The overall action will pressure the Taliban into negotiating with the Afghan Government to find a way to end what has become an Afghan civil war—albeit with serious outside support. The resulting peace will create a more stable Afghanistan from which terrorist organizations will be unable to plan and execute attacks against the U.S. homeland.

But what if the desired end state isn’t achievable, regardless of how many forces the U.S. deploys?

If America sends an additional four thousand troops, relaxes the rules of engagement, pushes trainers down to the lowest practical level and gets diplomatically tough with outside supporters of extremist groups, it might allow Washington to maintain a foothold in Central Asia and thus influence Pakistan, Russia, China and Iran. Of course that would hinge on America’s willingness to occupy territory with substantial numbers of soldiers over a sustained period of time (some would argue forever, as is the case in Korea, Japan, Europe and elsewhere).

But would such a cost be justified? Could the United States simultaneously convince the Taliban that it won’t quit, and everyday Afghans that it’s not planning to occupy their country indefinitely? Would that end the systemic corruption that plagues the ineffective Afghan government? And would such a massive investment from U.S. taxpayers and soldiers yield a marginally functional Afghanistan that isn’t a haven for international terrorists.

If the last decade and a half is any indicator, the answer to all those questions is a resounding no.

The priority is to protect the American homeland; that should be the focus—not nation building, regime change and annihilating every form of terrorism around the globe.

All tools of statecraft—economic, diplomatic and military—should be employed to eliminate threats to U.S. security. But that means making strategic choices and prioritizing missions.

It is impossible to eliminate every terrorist in Afghanistan, let alone around the globe. Fortunately, U.S. security does not depend on achieving such fantastic goals. Desperately needed is careful consideration of ways and means to reach an outcome that keeps Americans safe.

Giving U.S. men and women in uniform strategic objectives that they can accomplish is essential. Deploying military force and risking the lives of soldiers must be a last resort—when there’s a vital national-security interest and a sound, realistic strategy. Sending them into harm’s way without a strategy, an achievable end goal or the authority to wage the war is as morally reprehensible as not caring for them when they return.

Rob Givens is a retired brigadier general who served in the U.S. Air Force for twenty-seven years. A former special assistant to the Chairman of the Joint Chiefs of Staff, he serves as a foreign-policy fellow and national-security analyst at Defense Priorities.