The Future of European Security Lies in London and Berlin 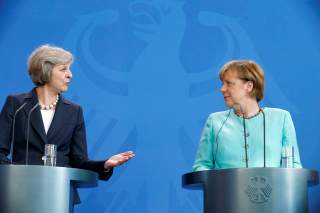 Under President Donald Trump, America’s commitment to NATO seems to be wavering. General H. R. McMaster, his national security advisor, may have restated this commitment, but Trump’s silence on the issue is creating unease in European capitals. The president has made clear his dissatisfaction with member states not meeting their commitment to spend 2 percent of GDP on defense, as well as his frustration that the United States continues to bear the cost of NATO’s commitments in Europe. If Europe cannot rely on the United States, then are there any European powers willing to take on a strategic leadership role within NATO?

There are two obvious candidates. One is the United Kingdom, Europe’s sole contributor to collective nuclear deterrence. With Brexit threatening to isolate the UK from Europe, there are convincing reasons for London to expand its defense and security cooperation with continental capitals. The British government recently pledged to continue and enhance its commitments to European security, and NATO commitment remains high on its foreign-policy agenda.

Germany, Europe’s economic powerhouse, is the other. For decades, Berlin has remained reluctant to translate its economic power into military force. No more. Chancellor Merkel has pledged to lift overall German defense spending from 1.2 percent of GDP to 2 percent, and is increasingly open to the idea of taking on more responsibility within the organization.

Unlike the United States, neither the UK nor Germany is strong enough militarily to act as primary protector of European security. But what if London and Berlin were to take the reins of NATO in Europe together?

London intends to continue playing one of the leading roles in NATO, and has—on a European scale—powerful armed forces. Berlin, for its part, has the capacity to take on a militarily role comparable to that of the UK—if not stronger. Together, they would form a formidable defense and security force within NATO. It would be beneficial to all parties involved. The United States would gain some breathing space in Europe, allowing it to take on bigger roles elsewhere, be it in Afghanistan, Iraq, or Syria. The UK and Germany would become leading guardians of the post–Cold War balance of power in Europe.

London and Berlin are already showing a common front in defending eastern Europe (the UK is leading a NATO deployment in Estonia, and Germany is leading one in Lithuania) and in the fight against ISIS in Syria and Iraq (the UK is flying bombing missions, and Germany is providing reconnaissance aircraft). And potential areas for further cooperation are plentiful. To begin with, there is countering hybrid threats, in particular cyberattacks. These have, in recent years, become a reoccurring problem for NATO members, with countries—both individually and within NATO’s organizational framework—creating various mechanism to counter attacks of this sort.

Britain has one of the world’s leading cyber communities, and would have plenty to offer in support of Europe’s security. In 2015, George Osborne, then chancellor of the exchequer, committed to increase spending on cybersecurity to $2.4 billion within the next five years and, the following year, created the country’s first National Cyber Security Centre. While Germany lags behind the UK somewhat, it has recently undertaken to modernize and reform its cyber sector. In January of this year, it launched the Cyber and Information Space Command, which was established as the sixth military service alongside the army, navy, air force, joint forces and medical service.

Some progress has already been made in formalizing Anglo-German strategic leadership. In 2015, during a bilateral meeting, the British and German defense ministers announced that their respective countries would cooperate towards a stronger defense and security partnership. Last year, the British Royal Navy announced that it would deploy its newest helicopter, the Wildcat, aboard a German frigate in the Mediterranean as part of an effort to strengthen defense cooperation. In March of this year, the British and German defense ministries confirmed that they are working “on a joint vision statement on future co-operation.”

The development of the British-German security partnership would, in the context of NATO, put continental security back in the hands of Europe. It would allow the United States to both reduce its troop deployments overseas and draw down its contribution to NATO’s budget (22 percent of the overall budget is financed by Washington, more than any other ally). For NATO operations in Europe, having two continental powers collaborating on security issues—from hybrid threats and cyber security to nuclear deterrence and intelligence operations—would be a strong sign to Russia and other would-be threats that Europe can stand on its own two feet.

For both London and Berlin, intensifying defense and security relations is logical. It would be in both country’s national interests, as well as those of their allies. Layered on other bilateral partnerships, including the Franco-German one and the Anglo-American one, the Anglo-German partnership would give strength to the overall NATO structure, and provide a strong and stable platform on which to continue to promote and protect European security.

Dr Andrew Foxall is Director of the Russia Centre Studies at The Henry Jackson Society, where Axel Rigault Jorgensen is a Research Assistant. Follow him on Twitter: @drewfoxall.