The Global Middle Class Has Stalled. Has It Stopped for Good? 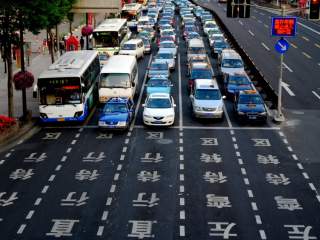 The emerging world—lower and middle income countries alike—found China’s insatiable appetite for commodities in recent years a godsend. For the new middle class a commodity supercycle was the simplest route to plenty. If a country had commodities it benefited either from direct trade, or though persistently higher prices of nearly all industrial commodities. By meeting China’s surging demand, the global middle class was going to grow forever.

According to Pew Research Center data, this global middle class—a bracket including those making between $10.01 and $20 per day on an adjusted basis—grew from 7 percent of the global population in 2001 to 13 percent in 2011. That’s not something to be disappointed about. The low-income bracket—$2.01 to $10 per day—increased from 50 to 56 percent, which, in the context of a rapid decline in the percentage of the world’s poor, from 29 to 15 percent, is quite the feat. But it is also not the entire story.

As pointed out by Pew, more than half of the new, global middle class was created in China. Using the same numbers as Pew, that means 203 million of the 386 million who joined the middle class were in China. The figure is astounding, but not surprising. The scale of economic growth in that country has been astonishing, not only lifting its own citizens out of poverty, but also—through its increasing demand—the rest of the world. In many ways, there is no ‘global’ middle class. There is a ‘Chinese’ middle class that just happens to spillover China’s borders.

But commodity growth is easy growth, and China has now begun to pivot away from the construction and manufacturing underpinnings of its immense growth, which has caused commodities to crash. The price of oil is trapped in a war between the free market “frackers” and an impotent cartel. The prevailing thesis of a new emerging middle class—and the accompanying expectations of higher demand for developed world goods and services—must be re-examined and, possibly, revised.

Brazil, Chile, Venezuela, Peru and Argentina have significant export ties with China—mostly consisting of soybeans, iron ore, copper and oil. Brazil alone added nearly 24 million people to its middle class as trade with China grew many times over in recent years. The economic reliance of much of South America on commodities further exacerbates its dependence on Chinese growth. As China slows its infrastructure investment, commodity prices fall.

Mexico, an outlier among the countries that made progress, lifted 12.9 million into the middle class while exporting little to China. Mexico does, however, have a significant petroleum industry. Yet the upheaval caused by the emergence and spread of hydraulic fracturing in the United States, and the resultant lower oil prices, makes it much more difficult to grow a middle class.

Economists have long observed the difficulty of moving from ‘middle income’ to ‘upper income’—a problem known as the middle-income trap. Somewhat more disturbing, there now appears to be a lower likelihood of moving up the ranks in low-income countries as well.

Simply, a country that starts as a low-income country is likely to stay there (the same holds true for the high-income brackets). A recent St. Louis Fed study by Maria Arias and Yi Wen found a 5 percent chance of transitioning from low to middle and an 18 percent chance of middle to high—over 140 years.

Even with all that China has done, it is still a low-income country. India, which has made tremendous strides in alleviating poverty, has increased its low-income bracket far more than its middle-income cohort. Meanwhile, Africa, on the whole and reduced into its individual parts, is disappointing. Nigeria, with its rich commodity endowment, has lagged with little transition to the middle class. Outside of China’s sphere of influence, the global middle class gained little. Even under extraordinarily positive conditions, the upward shift is difficult to execute.

It may be too simplistic to blame the demise of the global middle class on China’s abrupt pivot and a declining commodity market. In many ways, emerging countries themselves deserve to bear some of the blame. The fleetingness of the commodity boom was recognized by few, and exploited without much heed for the future. Only time will tell if those who reached the middle class during the boom years can stay there, and whether or not China’s focus on growing its domestic consumer economy can sustain a resilient middle class.

The emerging world not only faces a commodity bust and a slowdown in China, but now the potential for increasingly tight—though still historically loose—monetary policy in the United States. Higher U.S. interest rates encourage capital flows to exit the emerging world, exacerbating the existing problem.