The Global War on ISIS After Orlando 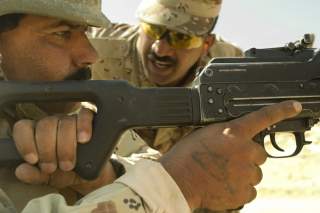 The United States needs to bear down on a comprehensive strategy to defeat ISIS globally in the aftermath of the terrible June 12 tragedy in Orlando, Florida. To be sure, no such strategy can reliably prevent all such future attacks. All of us including President Obama already knew that ISIS was a threat before the Florida killings; nothing particularly new has been learned from the mass murder of innocents by a deranged and evil killer. But ISIS has a track record of using its battlefield and terrorist successes to excite, attract, and inspire new recruits and goad sympathetic, impressionable minds to heinous acts. And Americans have now one less reason to hope that a strategy of containment or of benign neglect can lead to ISIS collapsing regionally and globally of its own weight. Moments like these require that we mobilize our energies and resources as a nation to up our own game against this deadly strategic threat.

Some will say that ISIS overachieved here, or that Omar Mateen was more a deranged individual than an ISIS operative, or that recent battlefield progress by the United States and its partners against ISIS in Iraq and Syria will soon lead to the group’s demise. None of these arguments are compelling. What Mateen did, even if the bloodiest single shooting spree in U.S. history, is entirely repeatable by well-trained individuals with access to weapons like the AR-15. Mateen was perhaps deranged, but he also was apparently pushed over the edge by the allure of joining a broader ISIS-inspired movement that finds legitimacy in doctrines of hate, and takes purpose from creating mass-casualty events in the name of some perverted interpretation of Islam. It could, and probably will, happen again.

Yes, a combination of Iraqi forces, U.S. and coalition airpower, Kurdish fighters, Sunni tribesmen and Shiite militias has taken back perhaps 40 percent of Iraqi territory and 20 percent of Syrian territory previously held by ISIS. ISIS may have lost up to half its revenue in those two countries as well. But the cities of Raqqa and Mosul remain firmly in ISIS hands. Over the last year or two, moreover, ISIS has deepened its roots from the Sinai peninsula to Libya, established tentacles from Azerbaijan to Afghanistan and into Southeast Asia, and gained a powerful affiliate in the form of the Boko Haram movement in Nigeria. It may be down, but it is hardly out. Indeed, netting out all the trends worldwide, it may not even be down. At least, its followers and would-be recruits appear not to think so.

President Obama has led the creation of a sixty-six-nation coalition against ISIS that one of us had the privilege to help organize and lead until last fall. It pursues a five-prong strategy and has been doing so since 2014:

-- The military line of effort

These various priority areas have produced some notable successes, particularly in Iraq and Syria as mentioned above. Moreover, the flow of foreign fighters into the Levant appears to have dramatically diminished this year. Some of that flow was redirected to Libya, alas. Yet even in Libya there has been good news in recent days, with forces loyal to the new coalition government driving ISIS out of parts of Sirte.

All that said, several aspects of the campaign are lagging, and this is the kind of moment that must be used to reinvigorate them. Country by country, they might be summarized as follows:

Iraq. Here government-led forces are making headway, but the pace is slow, and most worrisome of all, there is little reason to think that Mosul in particular will be well governed once it is retaken from ISIS. We need to find a way to increase US leverage in Baghdad to create the kinds of “hold” forces that can lead to a stable peace, and not sow the seeds of the next ISIS-like group. That may require a larger aid and assistance package from the United States—especially relevant given how much Iraq depends on oil revenue and how much oil prices have fallen.

Syria. Here the political strategy does not really hold water. Peace talks are moribund; Assad is on the march, with Russian help. We need to lower our political goals—confederation, with protection of minority rights, may be a more appropriate standard for success. But regardless, we need to step up our game at helping not only Kurdish forces, but Arab moderate forces too. Quite likely, we will need to relax modestly our vetting standards on who we help, and increase severalfold the number of Americans involved in the training and equipping efforts. Certain types of retaliatory measures against Syrian government aircraft that bomb declared no-go zones may be appropriate as well.

Libya. With the government of unity perhaps taking shape, the West needs to be preparing now an intensified aid and training program for a Libyan government force that can gain the strength needed to consolidate control at least in ISIS-occupied areas in the country’s central coastal regions.

Nigeria. With President Muhammadu Buhari making progress against corruption, it is time for an expanded American assistance program that may even, if Nigerians so request, involve deployment of small mentoring teams to the field to help the army in its fight against Boko Haram.

Afghanistan. President Obama should not make any further reductions in U.S. troop levels for the rest of his presidency, and should allow U.S. commanders considerable flexibility in how they employ airpower there against the Taliban.

The Homefront. ISIS is in fact a three-headed monster—with its core in Iraq and Syria, its various provinces and affiliates (or "wilayats") around the broader region, and the global network that binds the pieces together. It is against this network, both domestically and internationally, that we must double down, for it will be this network that will generate the attacks upon our homelands. To that extent, much scrutiny is rightly being given to how the FBI investigates suspected domestic terrorists and how weaponry can be kept from those who are dangerous. Beyond our domestic efforts, we need to attack and disrupt the global network relentlessly. Here is a critical and urgent leadership role for the United States in the context of the Global Coalition to Counter ISIL. And here technology is increasingly a pivotal component. Encrypted smart phones have complicated this effort when cells of extremists are actively plotting attacks. But the net effect of technology can still probably help us—if we intensify our pressure on the network through vigilance, rigorous investigations that blend law enforcement and intelligence, and disruptive, timely actions against suspects. New York City, London and increasingly Paris have done this, but the methods are not yet generalized. This requires aggressive and unequivocal American leadership.

None of these measures are enormous; even taken together, they will involve no more than several thousand additional U.S. personnel and at most low single billions of dollars a year in aid of various types to groups that are doing the real fighting and dying in support of a cause with which we strongly concur. We must strike all three heads of this horrific creature, simultaneously and relentlessly. We have made a modest amount of progress against ISIS, but now is a moment to intensify the effort before the next, possibly much worse, attack occurs.

John Allen and Michael O'Hanlon are senior fellows at the Brookings Institution.