The GOP’s Road to Victory 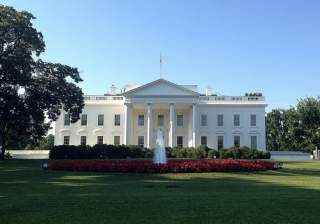 WHEREVER ONE looks these days, crises, conflicts and chaos seem to rule. From Tripoli to Tokyo, from Kiev to Caracas, the pace of violence appears to be accelerating. “Looking back over my more than half a century in intelligence,” the director of national intelligence, James Clapper, testified earlier this year, “I have not experienced a time when we’ve been beset by more crises and threats around the globe. My list is long.” How ironic, then, that national-security issues should dominate the headlines during President Obama’s second term, given how little time was devoted to a serious or sustained discussion of these subjects during the 2012 presidential race.

I advised Governor Mitt Romney on national-security issues beginning in 2005, traveling with him to Asia, the Middle East and Europe, drafting policy memos and organizing briefings during both the 2008 and 2012 campaigns. Naturally, I thought that foreign policy should have been far more prominently discussed during the 2012 race, and knew that Romney had a genuine interest in these issues—he had read widely, met with numerous foreign leaders, and acquired a sophisticated understanding of international trade and financial markets. I also thought, as did all of the other foreign-policy experts on the campaign, that Obama was vulnerable to criticism of his conduct of American foreign policy.

There was no shortage of policies to criticize. Obama entered office with an ambitious agenda to negotiate a climate-change treaty, accelerate the Middle East peace process, reach out to the mullahs in Iran and our other adversaries, embrace global nuclear zero and “reset” relations with Russia; he ran aground on all counts. He distanced himself from our traditional allies, dramatically cut defense spending, and failed to promote trade agreements that would generate jobs and create prosperity. He failed to recognize and seize the historic potential of the Arab Spring and, more generally, failed to speak out forcefully for human rights and individual freedom at a time when many people around the world were yearning for America’s support. He placed an inordinate faith in international institutions to maintain world order; he placed far less faith in America as an exceptional country that can and should shape world events.

SO WHY did my candidate, with one large exception, tend to downplay foreign policy on the campaign trail? And what lessons does this treatment of foreign policy in the 2012 campaign hold for the GOP and for the Republican nominee in 2016?

Needless to say, campaigns are not run by foreign-policy experts; they are run by political professionals. The Romney political brain trust made four early assumptions that shaped the rhythm, contours and focus of the campaign.

First, they reasoned correctly that Obama was most vulnerable on the economy. The country was slow to recover from the 2008 recession, homes were being foreclosed and unemployment remained stubbornly high. Any day not criticizing the president over the economy, they believed, was a day wasted. And economic success was Romney’s sweet spot. His track record of growing companies and creating jobs in the private sector gave him credibility on this subject that the president could not match.

Second, eight years of President George W. Bush and the wars in Iraq and Afghanistan cast a long shadow. Many members of the Romney foreign-policy team were veterans of the George W. Bush years, and we worried that the Obama campaign would try to spin any foreign-policy position or pronouncement as a warmed-over version of “failed” Bush policies. Or worse, that the Obama team would portray the Romney campaign as having been infiltrated by unrepentant “neocons” eager to launch new wars around the world. (Sadly, the media often abetted this effort; many journalists indiscriminately used the term “neocon” without understanding what it meant.) Any mention of foreign policy, especially as it related to the Middle East, always risked diverting attention from a sober discussion of the administration’s shortcomings and forcing the Romney campaign to relitigate the Iraq War.

Third, the residue of these two wars, coupled with the lingering effects of the recession, produced an electorate that did not care very much about foreign policy; in fact, polls showed that the American people were “fatigued” from these conflicts and preferred to focus on domestic issues or, in the president’s words, “nation building here at home.”

Fourth, at times during 2011 and 2012, it seemed as if the foreign-policy differences within the Republican Party were larger than our differences with the Democrats. The challenge for the Romney campaign’s stewards was to assemble as big a “tent” as possible, bridging the divide from libertarians who wanted a more restrained U.S. role in the world to internationalists who wanted a more active leadership role, and including social conservatives, business conservatives, evangelicals, free traders and Tea Partiers. Too much specificity could risk driving away key voters in the battleground states.

Combined with all these factors was a more traditional one: the fact that few career campaign officials have much experience in foreign policy. It is always easier for them to play to their strengths, such as raising money, securing the base, identifying hot-button wedge issues to attract new voters, and generally focusing on bread-and-butter issues closer to the hearts of the electorate. The candidate is thus advised to do the same. 2012 fit this pattern exactly.

THIS APPROACH was certainly reasonable under the circumstances. Whether Romney would have won in November 2012 had he been more outspoken on foreign-policy issues is uncertain, at best. But the next race for the White House is likely to be far different from the last one. Foreign-policy and national-security issues will play a more prominent role than they did four years earlier, for two reasons.

First, the world is a dangerous place and is likely to become more so in the next few years. The Obama administration’s second-term foreign-policy team has yet to demonstrate much competence in either anticipating crises or managing them diplomatically once they occur. The White House has been long on rhetorical flourishes and short on providing the resources to underwrite its policies; it has repeatedly willed the ends without providing the means. Relations with China have become contentious, and relations with Russia have become hostile. At the same time, our ties with friends and allies have deteriorated. Terrorism has continued unabated. Indeed, as Senator Dianne Feinstein, the chairman of the Senate Select Committee on Intelligence, commented during a hearing earlier this year, “Terrorism is at an all-time high worldwide.” With more than two years left in office, President Obama often seems diffident and hesitant, apparently resigned to accepting that there is little the United States can do to influence events. The fires will continue to burn.

Americans have seen this movie before. The Jimmy Carter years were distinguished by defense cuts, the Soviet Union’s invasion of Afghanistan, attacks on U.S. embassies and our diplomats being held hostage. When seeking the presidency in 1980, Ronald Reagan famously asked the American people a week before the election, “Are you better off than you were four years ago? . . . Is America as respected throughout the world as it was? Do you feel that our security is as safe, that we’re as strong as we were four years ago?” His questions crystallized Americans’ widespread dissatisfaction with the direction of the country and broke open a close race. Democrats in 2016 will be as vulnerable to this line of attack as they were under Jimmy Carter.

Second, it is likely that Hillary Clinton will be the standard-bearer for the Democrats and that she will point to her record as secretary of state as a prominent part of her case for why she ought to be elected president. Her recent interview in the Atlantic suggests she understands that she will be running as someone joined at the hip to Obama’s failed foreign policies. But while she may criticize the lack of a strategic vision in his “don’t do stupid stuff” approach, she will still have to defend her own “smart power” slogan as something more than a bumper sticker, as well as the fact that her actual accomplishments during her four years as chief diplomat were thin. Nonetheless, she will tout her expertise and attempt to portray her globe hopping as essential to restoring America’s reputation. She will also challenge her Republican opponents to match her knowledge about foreign policy, seeking to portray them as unfit to handle a foreign-policy emergency when the phone rings at 3:00 a.m. (as she did with then senator Obama in 2008).

IF THE Republicans win back control of the Senate in the November elections, there will be a fine opportunity for the party to lead and shape a national conversation on foreign policy. Three respected senators—John McCain, Bob Corker and Dan Coats—are likely to assume leadership roles on the key national-security committees: Armed Services, Foreign Relations and Intelligence, respectively.

The objective here should be to use this victory to set a foreign-policy agenda that does more than just highlight the shortcomings of the Obama years, as tempting as that will be. A GOP majority in the Senate should also be used to identify those issues of traditional Republican strength and road test new ideas. This would ideally lead to a set of foreign-policy objectives that the party could tee up for the 2016 campaign.