The GOP Debate: Religion and Rivals in Iowa 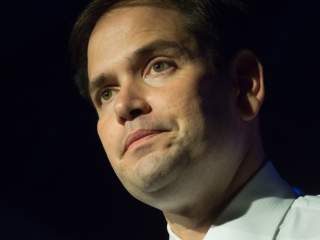 Marco Rubio wants to be clear about one thing: “there's only one savior and it's not me. It's Jesus Christ who came down to earth and died for our sins.”

That was how Senator Rubio answered a question at last night’s Iowa GOP debate about having been described by TIME as his party’s savior. It was not his only religious overture, however: “my goal is not simply to live on this earth for 80 years, but to live an eternity with my creator,” he assured Iowans and Fox News viewers elsewhere. “And I will always allow my faith to influence everything I do.”

Four years ago, 32 percent of Republican caucus-goers who self-identified as born-again or evangelical supported Rick Santorum, and such strong plurality support from that bloc propelled Santorum to a surprise first-place tie with Mitt Romney in the 2012 caucuses. Rubio’s rhetorical pander to the religious right is only sound politics—but does Rubio really have a shot at being the Christian conservative pick in 2016?

He had surprisingly little competition on stage. Chris Christie only invoked religion as a theme subordinate to national security: “I will take on ISIS, not only because it keeps us safe, but because it allows us to absolutely conduct our religious affairs the way we find in our heart and in our souls.” John Kasich, who in the past has been as quick to testify to his faith as Rubio was last night, was asked about statements in which he had invoked his Christian beliefs to justify his decision to expand Medicare benefits in Ohio. Kasich did not take the opportunity to grandstand: “All I say is that when I study scripture, I know that people who live in the shadows need to have a chance. But I’m not deciding that anybody’s got to make these decisions the way that I do, on the basis of what I do.”

Rubio had nothing to fear from whatever residual appeal to evangelicals Santorum or the winner of the 2008 caucuses, Mike Huckabee, might still have, as neither of those candidates qualified for the main stage. (Instead, they joined Donald Trump, who boycotted Fox, for a rally on behalf of wounded veterans.) And when asked whether “GOP messaging on Muslims has stoked the flames of bias,” even Ben Carson, the neurosurgeon who briefly seemed to be the Christian right’s favorite this year, ecumenically affirmed that “everybody is welcome from any race, any country, any religion, if they want to be Americans. If they want to accept our values and our laws. If not, they can stay where they are.”

But if Rubio was the most outspokenly faith-based candidate last night, it was because he had to be—his chief rivals at the top of the polls both have advantages with this key Republican demographic that Rubio lacks. Ted Cruz—the focus of much of the other candidates’ criticism last night—has built effective inroads into the evangelical community in Iowa, while Donald Trump has the endorsements of Phyllis Schlafly, Sarah Palin and Jerry Fallwell Jr., three names with considerable weight on the religious right.

Twice during the debate Rubio vowed to “unite this party,” but he comes off as blatantly insincere when he frames himself as the godliest man on the stage or, in answer to questions about immigration, as an unflinching defender of the nation’s borders and opponent of amnesty. Jeb Bush—who supported the “Gang of Eight” deal that defined Rubio’s immigration policy before the Florida senator was born again as a restrictionist—won applaud by calling attention to Rubio’s inconsistency.

While Frank Luntz’s post-debate focus group declared Rubio the winner of the night, just how Rubio can be the savior (if he’ll pardon the expression) of the party’s moderate wing while simultaneously persuading the party’s right-wingers that he’s truly one of them is not at all clear. The Republican right has plenty of more obviously hardline choices—beginning with the frontrunners, Trump and Cruz.

Without Trump, moderates had a chance to shine last night. Jeb Bush certainly stood out for his optimism. Chris Christie proved deft at turning a critical question about “Bridgegate” into an occasion to talk about his toughness as a prosecutor and how that would help him against Hillary Clinton. “I will take her on, and when I take her on I guarantee you one thing, she will never get within ten miles of the White House. The days for the Clintons in public housing are over.”

Rand Paul returned to the main stage after failing to qualify for the previous debate, and he too made a mark as perhaps the most thoughtful candidate present, albeit one whose ideological constituency—pragmatic Republican libertarians—may be virtually nonexistent. Paul’s contribution to the theme of religion in politics was to cite the theologian Os Guiness for showing “that liberty requires restraint but the only restraint consistent with liberty is self-restraint.”

The remark was part of a complicated but carefully reasoned response on Paul’s part to the question about whether abortion should be an issue for the states or the federal government. “I have said that we could leave it to the states but I've also introduced a federal solution as well,” Paul noted, explaining that making it a state matter would reduce abortions until a federal ban became possible. Despite the intricacy of the answer, it garnered enthusiastic applause.

Paul scored points both with the audience and with Twitter commentators when he spoke up for criminal-justice reform as well. “Drug use is about equal between white and black, but our prisons—three out of four people in prison are black or brown. I think something has to change. I think it's a big thing that our party needs to be part of, and I've been a leader in Congress on trying to bring about criminal justice reform.”

Paul, Rubio and Bush all had the potential to make the race for the 2016 Republican nomination a referendum on new directions for the party. Rubio and Bush were seen as Hispanic-friendly candidates—and perhaps just as importantly, candidates friendly to Hispanic-friendly white moderates. Paul was to have made the party more libertarian and more welcoming to blacks hit hard by the criminal-justice system. But instead the party base has rewarded the most combative right-wing figures in the contest—Trump and Cruz.

With Trump absent, Cruz was the butt of the other candidates’ criticisms, even drawing together Rubio and Paul to attack him in tandem. “This is the lie that Ted's campaign is built on, and Rand touched upon it,” said Rubio, “that he's the most conservative guy, and everyone else is a—you know, everyone else is a RINO. The truth is, Ted, throughout this campaign, you've been willing to say or do anything in order to get votes. Ted, you worked for George W. Bush's campaign.”

Cruz seemed unperturbed. After all, who are the most right-wing voters in the party going to support, “very charming” and “very smooth” Rubio—“He's very charming,” said Cruz. “He's very smooth.”—or libertarian Rand Paul? Or the Texas senator who is acknowledged by all as the most hated man in Washington, D.C.? Cruz fears Trump, not Rubio or Paul.

Foreign policy was the least remarkable theme of the night, with each candidate reiterating his by now well-known position. Rubio attacked Paul and Cruz for supporting budgets that would reduce defense spending. Cruz reiterated his willingness to resort to “carpet bombing” against Mideast enemies. Kasich declined to change his position on the Iran deal to favor tearing it up immediately upon assuming office, but he talked tough about building an international coalition ready to slap sanctions back on if Tehran violated the agreement in any way. Rand Paul again warned that “if you defeat Assad, what you will wind up with is a larger and more powerful ISIS that occupies that space. You might—you may well see an ISIS that takes over all of Syria.” And Chris Christie devoted his closing remarks to invoking 9/11.

Bush, Christie and Paul had a good night. Rubio continued to be a media (and Frank Luntz focus group) darling. But nobody had a good enough night to make a dent in Cruz’s support, let alone Donald Trump’s, and a rise in the New Hampshire polls for Bush or Christie is only going to come at the expense of Rubio and Kasich. It may indeed take more than the kind of savior TIME envisioned to keep the GOP from nominating Trump or Cruz—as things look now, it will take divine intervention.