The GOP Establishment’s War Against Trump 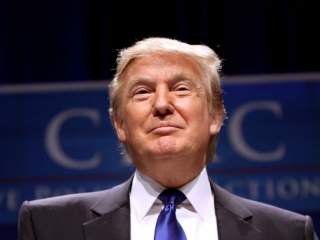 “Don’t worry,” Republican politicos keep assuring us. “We have a plan to defeat Donald Trump.”

Actually, they don’t. As we enter the eleventh hour before the Iowa caucuses, no one seems to know what that plan is supposed to be about. An attack ad? A brokered convention? A proton torpedo fired at a vulnerable exhaust port?

That last one would at least be more realistic than the RNC’s initial strategy of Jeb Bush, now reduced to lobbing attacks at Trump that bounce away like a battleship hull deflecting a BB pellet. Bush’s most memorable ad this year was a billboard in Iowa that read: “‘Donald Trump is unhinged’ – Jeb Bush.” Some Photoshop wag changed it to “‘Set all our donor money on fire’ – Mike Murphy.”

With Jeb fading, the Republican Party has turned to South Carolina’s Nikki Haley. Earlier this week, Haley became perhaps the first State of the Union respondent in history to spend equal time critiquing the president and her party’s likely nominee. She sounded as though the Republican establishment is now channeling Hillary Clinton and Barack Obama to bring down its own frontrunner.

“During anxious times, it can be tempting to follow the siren call of the angriest voices. We must resist that temptation,” she said at one point. The identity of her siren was lost on no one. Haley later pulled away the thin veil and admitted to reporters that her words were directed at Trump. “You shouldn’t take these things personally,” she said, knowing Trump is constitutionally incapable of not taking things personally.

Congressional leadership handpicked Haley to give the response, and it’s easy to see why. She’s an Indian American who encourages inclusion, a Southern governor who made her mark when she lowered the Confederate flag over the South Carolina capitol. And while she tows the conservative line on most issues, she’s also something of an operator, sidling the contours of Palmetto State politics with a delicacy that eluded her brash mentor Mark Sanford.

In other words, Haley is everything the GOP establishment wants: conservative but pragmatic, ideological but open, a reformer but not one who sets off too much dynamite around established interests. Just don’t expect Republican voters to care. They long ago became convinced that their politicians were abiding by Mrs. Erlynne’s quip in the Oscar Wilde play Lady Windermere’s Fan: “He thinks like a Tory, and talks like a Radical, and that’s so important these days.” Elected Republicans promise change on the campaign trail while secretly plotting an incrementalist course that runs straight through the cocktail bar. This accusation is already being leveled against Haley, with Rush Limbaugh associating her with “the elites” and crazed she-devil Ann Coulter joking on Twitter that she should be deported.

The Republican establishment has two problems here. The first is that the conservative revolt against the GOP, which began with the libertarian-ish eclecticism of the Tea Party, has been winnowed down to a singular immigration litmus test about the border. That’s bad news for establishment Republicans, who tend to oppose both immigration crackdowns and Trump, a perception driven home by Haley during her address. Her words, and theirs, aren’t likely to stick.

The second problem is there’s already a candidate with a credible plan to defeat Trump: Senator Ted Cruz, now leading the pack in Iowa. But Cruz may be the one person in America that the Republican establishment hates more than Trump. Consultant John Feehery actually tweeted last week that he could vote for Trump in a general election, but not Cruz! Then there is New York Times columnist David Brooks who declared on PBS NewsHour that he detected nothing less than a “satanic” tone to Cruz’s statements before retracting the aspersion.

Republican operatives in Iowa now find themselves trying to peel away Cruz’s evangelical supporters by—oddly enough—attacking his positions on ethanol and national security (one recalls the gospel passage where Jesus blesses corn mandates and accuses the Pharisees of being isolationists). Instead of Trump’s loss being the party’s gain, the beneficiary has been an insurgent Tea Partier who’s systematically annoyed almost every major GOP figure. The establishment’s candidate of choice, Marco Rubio, is polling a distant third. Meanwhile, the Wall Street Journal editorial page is complaining that “a party that rejects Nikki Haley as a spokeswoman is one that doesn’t really want to build a governing majority.” Still, there’s speculation that Trump may even be a beneficiary of the most recent spate of attacks on him. Could the GOP establishment become disestablished even sooner than it fears?