Dissension Is Good for the GOP 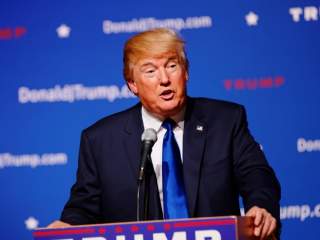 The first thing to be said about the twelfth Republican presidential debate Thursday evening is that it was actually sane, devoid of the kinds of cat-fight polemics that characterized many of the earlier debates. Nobody called anybody a liar. Interruptions and shouting matches didn’t emerge. The CNN moderators and network guest questioners asked substantive and respectful questions. Donald Trump was on his best behavior.

And that tone brought into focus a significant reality about the Republican Party that has been shrouded by some of the past messiness: The arc of issues is broader in the GOP than in the Democratic Party. Republicans are grappling these days with matters most relevant to the cares, concerns and angers that are driving large segments of today’s electorate.

Consider the exchange on trade policy, which seemed in many ways a throwback to earlier philosophical battles from decades long past. Trump, the New York billionaire and front-runner in the nomination battle, took the position of traditional protectionists who favored big tariffs to thwart competition from foreign producers. Trump has suggested a tariff on Chinese goods of up to 45 percent, a figure that harks back to the days of intense Republican protectionism of the 1880s and 1890s.

Texas Senator Ted Cruz argued that such a policy couldn’t possibly work. He offered a solid description of how it could lead to trade wars through retaliatory actions on the part of countries that would feel like tariff victims. Trump quickly retorted that his 45 percent proposal wasn’t actually a tariff but merely a tariff threat. It would be imposed only if China refused to refrain from predatory trade practices of its own.

But China wouldn’t refrain, said Cruz, and so the 45 percent duty would kick in. And who pays? Not China, said the Texan, but American consumers. “This solution would hurt America and hurt jobs,” he said. Trump countered that, no, under tariff protection, American corporations would build factories on home soil and hence generate jobs.

A similar debate unfolded on Social Security, which faces financial pressures that could balloon into a fiscal crisis. Again, Trump played the role of maverick, emphasizing his opposition to any curtailments, notwithstanding the financial pressures bearing down on the entitlement program. “I will do all in my power to not touch Social Security,” he said, adding he would address the problem by curtailing costly bureaucratic dysfunction, cutting aid to foreign countries, and generating so much economic growth that the looming shortfalls wouldn’t materialize.

Florida Senator Marco Rubio replied that those numbers don’t add up. He advocated raising the retirement age and curbing benefits for future recipients. “If we don’t do anything,” he said, “we will have a debt crisis”—which, he added, would “debilitate the economy.” Cruz argued that Social Security was “careening toward insolvency,” and the country needed leaders with the “political courage” to address it. He then ticked off a list of his own political actions demonstrated precisely that kind of political courage.

Another major disagreement emerged over Trump’s recent suggestion that there is a “problem of hate” within Islam. “Islam has a problem,” he said during the debate, adding that large numbers of Muslims have been “radicalized.” That brought sharp rejoinders from his opponents, who argued that Trump’s statements constituted a blanket generalization that would prove problematical when America had to deal with moderate Muslims and moderate Muslim nations in the ongoing fight against Islamist extremism. “At the end of the day,” said Ohio Governor John Kasich, “we have to bring the world together.”

Trump also was the outlier on Israel—specifically, his suggestion that he would seek to maintain a neutral stance vis-à-vis Israel and the Palestinians in order to position himself to broker a peace settlement between the two sides. That brought emotional responses from Trump’s adversaries. Rubio said Trump’s position constituted an “anti-Israeli policy.” Kasich argued that there actually was “no long-term peace solution, and it is the wrong thing to do.”

Such exchanges reflect a certain ferment within the Republican Party that belies the hand-wringing by those who see a looming party disaster stemming from the Trump rise. The country’s greatest political problem of recent years is that, in the current partisan deadlock, no party can muster a governing coalition. If the answer is for one or the other party to bust up the old political fault lines so a new coalition can emerge, then the Republicans seem to be at least working on it.

Trump emphasized this repeatedly through the night when he urged his party to embrace his support base, including independents, some Democrats, and Republicans who have not voted in recent years. “The Republican Party,” he said, “should embrace these people and unify.”

The New Yorker adopted a subdued tone for the debate, eschewing the kind of pugilism that characterized most of his earlier outings. With big delegate contests looming March 15 in Florida, Ohio, Illinois, Missouri and North Carolina, he is positioned to grab an almost insurmountable lead in the delegate race if he performs in those states as he has in past contests, particularly the winner-take-all states of Florida and Ohio. He leads in opinion surveys in both states.

Though Trump projected a diplomatic persona and brought to the fray his usual forceful expressiveness, he wasn’t particularly deft in parrying opposition salvos or marshaling rebuttal arguments. On a number of occasions he seemed to lack the kind of political grounding that provides campaign veterans with just the right retort at just the right moment.

The candidate who performed best in that department was Rubio, who came into the debate clinging to his candidacy by his fingernails following a string of unimpressive primary and caucus outcomes throughout the campaign season. The Florida senator gave what may have been his best debate performance of the campaign and what was unquestionably the best debate performance of the night. Throughout the evening, he was quick, articulate and on point.  Whether his debate luminosity can propel him ahead of Trump in his home state on Tuesday remains doubtful, though not impossible in a year of wild surprises. A loss for Rubio in Florida will crush his campaign viability.

Cruz’s central point was that he is the man best positioned to beat the presumed Democratic candidate, former Secretary of State Hillary Clinton, in the fall. Among Trump’s adversaries, Cruz took on the New Yorker most forcefully, though he maintained a high-toned demeanor even in his most aggressive moments.

Kasich played to his Ohio constituency, hoping to cadge a victory there that could keep his candidacy alive. His chances in his home state appear to be greater than Rubio’s in Florida, but it is difficult to see how he could become competitive for the nomination even with an Ohio victory. His debate performance was strong, though he rambled at times and characteristically reverted to his congressional and Ohio record when a sharply focused explanation of his outlook and philosophy might have generated more resonance.

The debate sets the stage now for the five Tuesday contests. If events unfold that day as they have thus far, Trump likely will collect the lion’s share of delegates and position himself for eventual victory. But events haven’t been unfolding in this campaign year with any kind of normal flow, and so it wouldn’t be remiss to anticipate some kind of surprise that would seem inconceivable until it happens.