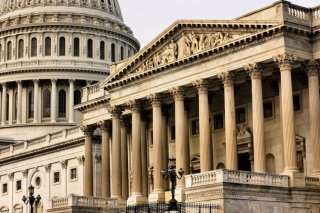 It's the holidays and people are observing all the usual traditions. Christmas shopping, putting up decorations and, in Congress' case, rushing to avoid some largely self-imposed crisis.

Although the deadline is tight and conservative groups are displeased, it did not take Congress that long to arrive at a deal that should avoid a partial government shutdown. (In the House, the Democrats are the ones scurrying for votes, while Elizabeth Warren seems to be the main one risking a closure in the Senate.) But will they be able to make it all the way to the 2016 elections without a shutdown?

Despite the theory that the party of government has the most to lose in a government shutdown, shutdowns don't actually give Republicans much leverage against the Democrats. Why? Because Democrats also believe shutdowns are bad politics for the Republicans.

The Washington Examiner's Sean Higgins compared the 2013 shutdown to the 1986 Danny DeVito film Ruthless People. In the movie, DeVito's wife is abducted by kidnappers expecting a ransom. What they don't realize is that DeVito hates his wife and had intended to kill her himself, making him unlikely to pay the ransom.

The Cruz-inspired shutdown did not, in fact, end up defunding Obamacare. Instead, it distracted public attention from Obamacare's inept roll-out, where Republicans would have otherwise looked prescient in their objections to the health-care law.

Invariably, the shutdowns rally the Democratic base against the GOP. They turn off conflict-averse independents, who say they just want to get things done. Finally, when Republicans ultimately capitulate and reopen the government, their remaining conservative supporters are angry.

It's a perfect storm John Boehner and Mitch McConnell wish to avoid.

So why don't some conservatives see it that way? First, politics. The next round of Republican presidential primaries beckons, and some lawmakers will want to be seen as "more conservative than thou" before they commence. Proposing things to the right of whatever the leadership wants to do is a good way to establish these credentials.

Many grassroots conservatives think Republican leaders are a bunch of wimps at best, con men at worst. These GOP politicos campaign on defunding Obamacare or stopping the president's executive amnesty (to say nothing of longer-term conservative goals like shrinking the federal government or reversing Roe v. Wade). But once the votes are counted and the donations are in, they don't actually want to do anything about these issues.

Regardless of whether you think this perception is fair, it is deeply felt. And a prominent conservative who shows a willingness to fight on these fronts, even if his or her tactics are not likely to yield tangible results, will receive the base's gratitude.

Ronald Reagan may have lost the battle over the Panama Canal Treaty. But who won the war for Republicans' hearts and minds?

But there's also a not-altogether-inaccurate sense that the downsides of these shutdowns have been overstated. Republicans didn't lose control of Congress after the 1995-96 shutdowns. They gained seats after the 2013 shutdowns, recapturing the Senate majority.

"I contend to this day the shutdown did not hurt us as a party," former Congressman Bob Walker, a close Newt Gingrich ally, contended in 2005. "It was in fact the thing that led to a balanced budget and was a huge win, not a defeat."

Republicans did manage to work with (an improbably reelected) Bill Clinton to balance the federal budget after those shutdowns. But they also became less zealous about cutting government spending after those initial defeats, and the strongest fiscal conservatives among them, the ones who wouldn't get with the new program, were thoroughly marginalized by 1998.

The jury is still out on today's congressional Republicans, but there are some signs that this dynamic is playing out again. It's also worth noting that a lot of the party's 2014 pickups are attributable to safe candidates handpicked by the establishment, rather than the Tea Party. That will have some influence on the GOP's appetite for risk-taking.

Everyone agrees Republicans must pick their battles with the president. But not all Republicans will agree on which battles should be picked.