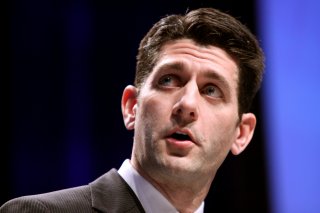 Forget Russia. The real blow to the Trump administration came today with the failure of the House of Representatives to vote on health care. For eight years, Republicans have vowed to repeal and replace Obamacare. That did not occur today. Instead, President Trump and House Speaker Paul Ryan suffered a severe blow. The nimbus of Trump as a dealmaker who could force a polarized Washington to work together on his terms is being damaged.

Much of it was self-inflicted. Why Trump, who campaigned as a populist reformer, would join himself at the hip with Ryan remains mysterious. Ryan’s bill constituted less a reform of Obamacare than a massive tax cut for the wealthy. Indeed, the provisions concocted by Ryan and his surrogates were inimical to the interests of Trump’s white working-class base. As Fox’s Tucker Carlson put it to Ryan on Wednesday night, “Looking at the last election, was the message of that election really, ‘we need to help investors?’ I mean the Dow is over 20,000. Are they really the group that needs help?” When queried again by Carlson about whether his bill favored the wealthy and ignored Trump’s base, Ryan simply responded, “I’m not concerned about it.”

Maybe he isn’t. But, as Peggy Noonan recently noted, “We are in the midst of the kind of crises that can do nations in. It is pleasant to chirp, as Speaker Paul Ryan does, of ‘choice’ and ‘competition’ and an end to ‘paternalistic’ thinking on health care. Is it responsive to the moment? Or does it sound like old lyrics from an old hymnal?” Noonan is right. An important new study by the Brookings Institution, which is discussed today in the Wall Street Journal, says death rates for white adults are dramatically rising:

while midlife mortality rates continue to fall among all education classes in most of the rich world, middle-aged non-Hispanic whites in the U.S. with a high school diploma or less have experienced increasing midlife mortality since the late 1990s. This is due to both rises in the number of “deaths of despair”—death by drugs, alcohol and suicide—and to a slowdown in progress against mortality from heart disease and cancer, the two largest killers in middle age.

During the campaign, Trump repeatedly said that he was concerned about the forgotten man that Ryan wants to continue forgetting. Yet now that he’s in the White House, President Trump has conveyed the impression that he is more interested in the appearance of a substitute for Obamacare than the substance of a new bill. His final concessions Wednesday to the House Freedom Caucus, which would have stripped a variety of provisions, including maternity care, savored of desperation. The Freedom Caucus stuck to its principles. Trump did not.

If Trump’s tactical shifts failed, it is also the case that his strategy was wholly flawed. Apart from linking himself with Ryan, he also ended up sidetracking the heart of his agenda. The administration risks squandering its entire first hundred days without any real accomplishments. Tax reform and tax cuts are nowhere in evidence. Nor is an infrastructure bill—the heart of Trump’s promise to make America great again, and an area where he might have been able to persuade Democrats to work with him.

The Trump administration vowed that Republicans who voted against the measure would be punished in the midterm elections. But the Koch network’s Americans For Prosperity and Freedom Partners have already indicated that they are prepared to spend millions to support legislators who oppose the health-care measure. Congressional Republicans will make another attempt to reach an agreement tonight, and aim for a vote Friday. But with moderates and conservatives feuding over health reform, the odds are that this issue will continue to vex the GOP, much as it did the Democrats after 2008.

Trump faces an agonizing choice in coming days. He can continue to try and cobble together a Republican coalition over health care, or he can move on. So far, the only thing the GOP push on health care has exposed is the division in the party itself. The wise move may be to wash his hands of health care and focus on the economic issues that were at the core of his campaign. If he does not, he may find himself losing his grip on the presidency before he could even really find it.