The Great Game in Asia: How China Sees Taiwan 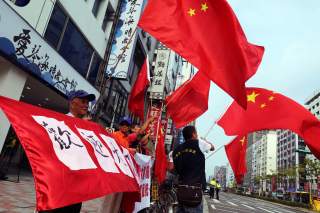 In the wake of China’s live-fire drills in the Taiwan Strait, along with the largest naval drills in history of the People’s Liberation Army Navy, the Republic of China’s (Taiwan) status and meaning to the U.S.-China relationship is more prominent than ever. Even as the United States implements the Taiwan Travel Act, with a potential review of its “One China Policy” in the future, Taiwan’s significance to Beijing appears unwavering. As a starting point to improving the Sino-American relationship over the Taiwan question, perhaps it is time for the United States to reexamine what Taiwan really means to China.

First and foremost, the resolution of Taiwan’s status has major implications for the Communist Party of China’s (CCP) legitimacy as the ruling party of China. This legitimacy can be broken down into three parts: legitimacy from the Chinese Civil War, CCP statements and policies, and history.

For the CCP, Taiwan represents the final obstacle to truly concluding the Chinese Civil War. The island is not just a haven for the Kuomintang who lost the civil war on the Mainland, but also represents a threat to Beijing’s system of governance as an alternative model for the Chinese people. To maintain its grip on the Chinese state, the CCP believes it must finish what Mao could not and defeat the “followers” of Chiang Kai-shek—thereby eliminating a threat to China’s internal stability.

It also does not help that the CCP have also backed themselves into this corner. Since the 16th National Congress of the Communist Party of China in 2002, the CCP has been consistent in its policy toward Taiwan, with elements of the policy going back to 1995. It is very difficult to back down from a policy that has been espoused for over twenty years, not to mention China’s Patriotic Education Campaign has solidified Taiwan’s status as part of China in the minds of the Chinese people. Moreover, a key policy heavily promoted by Chinese President Xi Jinping is the “China Dream” of the “great rejuvenation of the Chinese nation.” This most likely includes Chinese reunification with Taiwan.

From a historical perspective, which ties into the China Dream, unification of the country is typically required for lasting legitimacy. The Chinese dynasties one usually hears about are the Shang, Zhou, Qin, Han, Sui, Tang, Song, Yuan, Ming and Qing. Very few realize that China has undergone numerous states of disunity, some periods lasting over one hundred years, with competition amongst various dynasties and political entities for total control of China. Reabsorbing Taiwan would help cement the People’s Republic of China (PRC) as the legitimate government of all of China and unquestionably be considered a successor to the legitimate dynasties of the past.

Beyond legitimacy, the People’s Republic has a security interest in reunification with Taiwan. The island has been called an unsinkable aircraft carrier. No doubt Beijing thinks that the United States, or even Taiwan’s former colonial master Japan, could use the island for military means to threaten and contain China like they did in the past. However, the CCP could also use Taiwan post-reunification to more easily secure its claimed territory in both the East and South China Seas, as well as interdict Japan’s energy supplies and trade should it ever pose a threat.

In addition to serving as a potential check against the United States and Japan, Taiwan can be seen in China’s eyes as the first wall in the Mainland’s defenses. During the Century of Humiliation when the Great Powers carved out spheres of influences and imposed restrictive treaties on China, the Middle Kingdom’s naval defenses, which included Taiwan, were insufficient to prevent it from being manipulated by foreign countries. The CCP, acutely aware of its nation’s history, likely views Taiwan as a key to deter a future situation in which foreign powers would play a “Great Game” on the Mainland through the enhanced naval defense capability the island could provide.

Taiwan’s other security pillar is in the realm of economic security. For China, Taiwan sits between its major ports—meaning that Taiwan, or whoever could influence it, could cut off trade to and from the Mainland. Furthermore, the island is in a prime position to either secure or threaten China’s maritime energy imports, which include around 86 percent of China’s oil and over fifty percent of its natural gas. Taiwan’s potential to endanger Chinese trade and energy imports, thus the ability for the CCP to maintain economic growth and control of the country, are major security concerns Beijing.

Finally, Taiwan and its reunification with the Mainland are points of pride and power for China and the CCP. Reunification, or at least preventing Taiwan’s independence, would show other separatists, such as those in Xinjiang and Tibet, that attempts to break away would be futile. This would be especially significant due to the competing identities stemming from both Japanese colonial rule of the island between 1895 and 1945 and the February 28, 1947 Uprising from where the modern Taiwan independence movement originates.  Reunification would also show the triumph of the CCP over its political opponents. Not to mention, retaking Taiwan on Beijing’s terms would likely lead to the consolidation of its supporters as the Party will have shown that it and no other political party could “rejuvenate the Chinese nation.” Most importantly, Taiwan represents the largest obstacle to truly ending the Century of Humiliation. The CCP, and many Chinese, will not allow their pride to be damaged by Taiwanese independence or a marked change in the island’s status quo.

Clearly, Taiwan means a great deal to Beijing. Resolving the Taiwan question has legitimacy implications for the CCP, factors into China’s security calculus and is an issue of patriotism. While the United States has and should maintain its One China Policy, Washington should understand that tampering too much with relations with Taipei will have consequences. If push comes to shove over Taiwan, China may not blink.