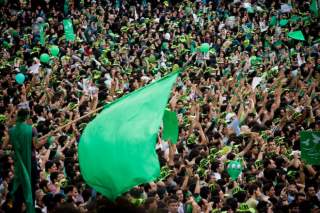 The Unsolved Problem of Khamenei and the Hardliners

The irony of this is that, while the hardliners have repeatedly declared that the Green Movement is dead, they have actually kept it alive through their own unbelievable lies and slanders against its three leaders.

Indeed, Khamenei and his supporters are concerned about the social support of the Green Movement. That is why they fear that the trio will restart the Green Movement if they are freed, and consequently demand that they apologize and repent before being released.

Their concern about the Green Movement’s appeal is also evident from the way Khamenei and his hardliner supporters have been warning about a new “sedition” taking hold during the Majles and Assembly of Experts elections in March 2016. Undoubtedly, they intend to use the “sedition” boogeyman as an excuse to prevent the opposition from winning the elections.

They are right to be worried as the the Iranian people have rejected Khamenei’s justification for cracking down on the Green Movement and putting its leaders under house arrest. Abbas-Ali Kadkhodaei, former Spokesman for the Guardian Council recently said that “the people must become convinced” of the trio’s political crimes, hence admitting that after four years of relentless attacks on the trio, people still reject the hardliners’ justifications for arresting the Green Movement leadership. If they’ve been unsuccessful at this thus far, there is little reason to expect this to change.

In sum, Khamenei and the hardliners made a strategic mistake by putting the Green Movement leadership under house arrest, but they remain unwilling to correct this error. Freeing the leaders of the Green Movement and other political prisoners is in Iran’s national interests and will also mend Iran’s image in the international arena. Khamenei still does not believe that democracy, respect for human rights and freedom strengthen a political system and state, because he is terrified of their consequences. Democracy will transform him, an unelected ruler for life, to one that must be elected by the people for a limited time, and must take responsibility for his actions. This is what terrifies him.

Akbar Ganji is an Iranian journalist and dissident. He was imprisoned in Tehran from 2000 to 2006, and his writings are currently banned in Iran. This article was translated from the Farsi by Ali N. Babaei.