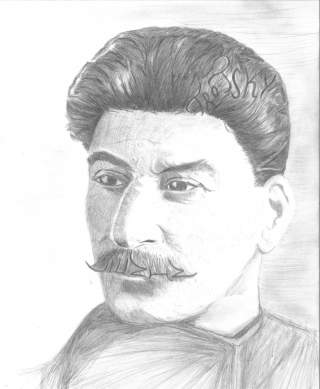 ANYONE UNFAMILIAR with the quality of Stephen Kotkin’s four earlier books on the Soviet Union might well question whether we need a new, voluminous tome about the first fifty years of Joseph Stalin’s life. Stalin, like Hitler, has been the subject of numerous biographies, ranging from Boris Souvarine’s pioneering work to Robert C. Tucker’s multivolume study. Is there anything important to add?

The answer is an emphatic yes, and not just because Kotkin’s Stalin is the product of a careful review of how a tyrant gained control of a country and exercised power. It dispenses with the myth that he was an intellectual dullard, showing that he was quite shrewd as well as forceful. What’s more, it contains essential background information for policy makers in the world today, illuminating some of the causes of the strife that persists despite the end of the Cold War.

In order to explain Stalin, Kotkin (a former valued colleague of mine at Princeton University) provides a brilliant political history of Russia in the early twentieth century. By casting his research net widely and examining evidence that has only recently become available as a result of the opening of Soviet archives, he illustrates the complexity of motives and fundamental unpredictability of events as they unfolded during the 1920s. In addition, Kotkin has supplemented the main text with 120 pages of notes containing relevant commentary of great interest, along with source citations. The level of detail is microscopic and the judgments crackling. This is a landmark achievement that is unlikely to be surpassed anytime soon.

Pace theoreticians of every school: history does not move in predictable patterns. Human beings make history, but the makers and shakers often fail to understand the potential effects of their actions. The most carefully planned projects can bring results that are the opposite of those intended. Once in a while, the wildest gambles pay off, but the payoff may not resemble the prize that was sought.

Stalin, whose party nickname was Koba, succeeded, against incalculable odds, in helping to create a Bolshevik dictatorship in the world’s largest country; through adroit maneuvering, he positioned himself in absolute control of that dictatorship. The result, however, bore no resemblance to the proletarian utopia predicted by Karl Marx. In fact, the Bolsheviks were turning Marxism on its head by launching a revolution in Russia. Marx always thought that the revolution would come in Western Europe. The notion that a Communist revolution would emerge in Russia, where there was no real proletariat, would have dumbfounded him. According to Kotkin, the Russian empire’s dissolution in wartime meant that “the revolution’s survival was suddenly inextricably linked to the circumstance that vast stretches of Russian Eurasia had little or no proletariat.” The regime scrambled to come up with a theory justifying tactical alliances with local “‘bourgeois’ nationalists,” a term that had as much bearing on reality as did the later employment of “kulak,” which implied that any peasant who owned a cow or two was somehow part of the exploitative class.

KOTKIN’S STALIN provides many examples of other logically perverse sequences of events. None is more striking than the success and durability of Vladimir Lenin’s seizure of power in Russia on November 7, 1917 (under the current calendar). Nobody expected it to last, not even Lenin himself, it seems, unless it sparked a successful revolution in Germany—which, of course, it failed to do. A full-scale uprising was simply not in the cards: after Kaiser Wilhelm abdicated, there were the violent Spartacist uprisings, led by Karl Liebknecht and Rosa Luxemburg, as well as an abortive Bavarian Soviet republic. But the German revolutionaries couldn’t hold on. Bolshevik rule did not look much more secure.

Kotkin points out that Lenin’s “regime” initially consisted “at the top, of just four people: Lenin, Trotsky, Sverdlov, and Stalin, each of whom had a criminal record for political offenses and none of whom had any administrative experience.” He considers their creation of “one of the world’s strongest dictatorships” as “beyond fantastic,” and notes that the whole Bolshevik enterprise would almost certainly have been thwarted if just two people, Lenin and Trotsky, had been assassinated in 1917 or 1918. Lenin’s leadership was not that of typical transformative leaders, who “almost always” succeed “by cobbling broad coalitions.” Lenin did the opposite, “refusing cooperation and creating ever more enemies.”

The Bolsheviks did not succeed by organizing or managing an effective administration, but rather by implementing policies that virtually guaranteed war and chaos. They clung to power initially by “denying others a role in presiding over chaos,” but it was more than that, as Kotkin’s account demonstrates. In the cauldron of civil war and foreign invasion, the Bolsheviks forged a system of repression designed to eliminate not only active opponents but also presumed future adversaries. As he worked to establish a Bolshevik dictatorship over what, from 1922, was the Union of Soviet Socialist Republics, Stalin systematically maneuvered to eradicate any potential rival from the Communist Party leadership. By 1928, when this volume ends, Stalin was poised to conduct the forced collectivization that would result in millions of deaths and an agricultural system unable for decades to feed the country.

While Kotkin’s Stalin does not quite “approximate a history of the world,” as the author avers in its initial chapter, it covers most of what one needs to know about politics in Russia over the first quarter of the twentieth century. It is also uncommonly entertaining, incorporating descriptions of the personalities involved and covering supporting casts along with the principal actors. Even Lenin’s driver in 1917 makes a cameo appearance. The verbal portraits of Czar Nicolas II, his family and court, and key Russian politicians of the prewar period—Sergei Witte, Paul Miliukov, Pyotr Stolypin and Pyotr Durnovo, among others—are keen and tightly drawn. Virtually every person with significant interaction with Stalin is identified and characterized in some fashion.

Kotkin’s narrative is peppered with acute observations and unexpected comparisons. Some of his juxtapositions may seem strained, such as his comparison of the Bolshevik Revolution to Dadaism, but they keep the reader alert and intellectually involved. Others are right on target. For example, refusing to blame the failings of czarist Russia on “backwardness,” he observes that “the biggest problem for imperial Russia was not the nation but the autocracy.”

STALIN WAS the most influential Bolshevik leader in designing the governing structure of the USSR. He concluded that federalism would allow the Bolsheviks to cement their power and spread their credo: writing in Pravda on April 9, 1918, he stated, “Soviet power has not yet succeeded in becoming a people’s power to the same extent in the border regions inhabited by culturally backward elements.” It was important to liberate the masses from “bourgeois” nationalists, he said, by championing “schools, courts, administrations, organs of power and social, political, and cultural institutions in which the laboring masses . . . use their own language.” By July 1918 Soviet Russia became a new entity—the Russian Soviet Federated Socialist Republic (RSFSR).

Stalin and Lenin had disagreed over the substance of the new Soviet republic. Stalin wanted to incorporate Ukraine, Belarus and the Transcaucasian Federation into the RSFSR, giving them the same “autonomous” status as Tataria and Bashkiria. Lenin insisted on bringing the RSFSR into a broader union with Ukraine and the other Bolshevik-ruled national republics, so that it would be suitable for the subsequent addition of Poland, Germany and other “socialist” states that he expected to result from proletarian revolutions. Stalin bowed to Lenin’s wishes. If he had not done so, one wonders whether, in 1991, the RSFSR would have broken up as easily as did the USSR.

A relevant feature of the USSR was the separation of the formal government, a federation, from the real political power, the unitary Communist Party, commanded from a single center, Moscow. The geographical borders of the union republics were a sham, so far as political control was concerned. They were designed to give non-Russians the illusion that they had political autonomy. In some cases borders were drawn in a calculated way to foster internal division, the better to exercise external control from Moscow. It is these borders, further modified by changes during and after World War II, that the USSR’s successor states inherited. It is important to understand their origin if one is to comprehend the emotions involved in much of the conflict that has emerged in the post-Soviet space following the Soviet collapse.

For example, the “frozen conflicts” in the South Caucasus have roots in Stalin’s policy of creating pseudo-autonomous governments that were in fact controlled from Moscow by a unitary Communist Party. When Moscow’s heavy hand was lifted in the early 1990s, Armenia and Azerbaijan faced off in a struggle over Nagorno-Karabakh, an area with an Armenian majority that Stalin had made into an “autonomous” enclave in Azerbaijan. Once independent, Armenia seized control of it and established a corridor to it through Azerbaijani territory, but Azerbaijan still claims sovereignty over it. Likewise, tensions between Georgian leaders and the non-Georgian residents of Abkhazia and South Ossetia led to sporadic fighting, ethnic cleansing, the Russian invasion in 2008 and Russia’s recognition of the entities as “independent,” which neither Georgia nor most of the rest of the world accepts.