The Impact of Haley’s Comments 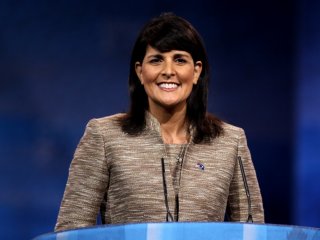 Forget about Barack Obama’s State of the Union speech last night. The most significant address was the one delivered by South Carolina Governor Nikki Haley. In attacking Donald Trump, she sounded, in important respects, like a mirror image of Obama—which is why Ann Coulter, the virago of the right, tweeted “Trump should deport Nikki Haley.” Laura Ingraham put it more politely: “Too bad @NikkiHaley missed her oppty to stand w/ working ppl who want borders enforced, American workers put first, govt shrunk.”

Make no mistake: Haley’s speech signaled that the real war right now isn’t between Democrats and Republicans. It’s between establishment and insurgent Republicans. Talking to NBS’s Today host Matt Lauer this morning, Haley confirmed that the fight is on: "Mr. Trump has definitely contributed to what I think is just irresponsible talk.” So will the GOP be the party of Trump and Ted Cruz? Or of Paul Ryan, Chris Christie, Jeb Bush, Marco Rubio and Haley? Her speech, as the Washington Post notes, has already won kudos from mainstream Republicans such as National Review editor Rich Lowry, the Washington Examiner’s David Drucker and Charles Krauthammer.

In soothing tones, Haley took direct aim at Trump’s fulgurations about Muslim immigrants swamping America. She invoked her own heritage as the daughter of immigrants from India, tying it to the America dream. She warned, “During anxious times, it can be tempting to follow the siren call of the angriest voices. We must resist that temptation. No one who is willing to work hard, abide by our laws and love our traditions should ever feel unwelcome in this country.” At the same time, she stated that immigrants “whose intentions cannot be determined”—a strikingly vague phrase, when what she really means are those intent on mayhem and murder—should not be admitted to American shores.

Haley also took the obligatory shots at Obama on foreign policy and economic grounds. Writing in the Atlantic, Claire Forna asserted, “For all the differences on display, however, Haley made a strong case that the nation can come together.” But this is questionable. The problem with Haley’s speech for many Republicans will be that it remains essentially a watered down version of Obama’s. It purveys gauzy optimism about the future in lieu of policies that might create one. But the notion that the Republican establishment will be able successfully to ignore the complaints and concerns of its base seems increasingly remote.

There are, after all, points of coincidence between Vermont Senator Bernie Sanders and Donald Trump, at least on foreign policy. Sanders tweeted today, for example, “How is it that we can spend trillions on never ending wars but can't afford to rebuild our crumbling infrastructure?” A fair enough question, though Sanders’s answer seems off base: “Congress listens to billionaire campaign contributors, not ordinary Americans.” In the world of Sanders everything appears to circle back to a small coterie of Wall Street billionaires.

Though Obama was clearly targeting Trump last night, his complaints about a partisan political divide could also be aimed at Sanders. Is a Vermont senator who issues inflammatory warnings about the Federal Reserve not a radical? Sanders declared, “an institution that was created to serve all Americans has been hijacked by the very bankers it regulates.” If Sanders does indeed win the Iowa and New Hampshire primaries, the Democratic party could begin to experience the kind of internal convulsions that the GOP is currently experiencing. In both cases, Trump and Sanders would be appealing to the white working-class voters who are rebelling against party elites, against the neoliberal discourse that has dominated American politics for decades.

Could Obama have truly imagined that his presidency, which was supposed to unite America, would have ended with him issuing an emollient address pleading for a retention of the old order? When John Adams delivered his final State of the Union address in November 1800, he said, “May this territory be the residence of virtue and happiness! In this city may that piety and virtue, that wisdom and magnanimity, that constancy and self-government, which adorned the great adorned the great character whose name it bears be forever held in veneration!” He added, “You will consider it as the capital of a great nation advancing with unexampled rapidity in arts, in commerce, in wealth and in population, and possessing within itself those energies and resources, if not thrown away or lamentably misdirected, will secure to it a long course of prosperity and self-government.”

And today? Whoever does become president will inherit powers that seem to be expanding with each presidency. As F. H. Buckley notes in the new National Affairs, America seems to be moving steadily toward a Bolingbroke conception of the presidency in which Congress becomes largely irrelevant. But despite his end runs around Congress and edicts, Obama knows that his own record remains hostage to who succeeds him. Depending on the outcome of the election, his ultimate legacy may be to have inflamed, not diminished, the divisions in America. Whether America will throw away its energies and resources or experience a new era of prosperity is very much in doubt.