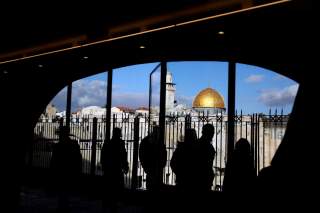 The question whether “liberal Zionism” can survive the far right trends that now dominate Israel’s political life was raised forcefully in the New York Times by its columnist Michelle Goldberg. It was prompted by Donald Trump’s recognition of Jerusalem as Israel’s capital, which Goldberg described correctly as “another nail in the coffin of ‘liberal Zionism’.”

While the reactions to Trump’s initiative have not yet fully played out, much is already evident. To begin with, they have exposed the stunning level of ignorance and misinformation that exists on this subject. Trump tried to soften the destructive impact of his declaration by insisting it would not affect any of the final-status issues that are to be the subjects of the peace talks he is trying to restart. He is obviously unaware that Jerusalem is exactly that—a final-status issue. Indeed, it is the most sensitive of the final-status issues. Unlike the others, it led Mahmoud Abbas, the most moderate of Palestinian leaders, to break off relations with the Trump administration.

Trump’s statement and much of the favorable commentary it elicited emphasized the history of Jerusalem and the attachment of the Jewish people to the city from Biblical times. Trump and his supporters also argued it is high time to recognize the “reality” that Jerusalem serves as Israel’s capital, implying that no matter how egregiously the reality created by Israel violates acceptable norms and international law, it creates its own legitimacy. Trump also stressed that every country has the right to determine the location of its own capital.

Opponents of Trump’s declaration cited the attachment of over a billion Muslims to Jerusalem, and questioned why that attachment weighs so much less than the Jewish one, especially since Muslims actually lived in Jerusalem and worshipped at the Noble Sanctuary for over a millennium. Most Jews did not make their lives in Jerusalem during these past two millenniums, even in times when they were able to do so. Instead they ascribed the yearned-for return to Jerusalem to eschatological time.

In fact, the Jewish attachment to Jerusalem related not to its status as a capital city but to the location of the Batei Hamikdash, the two ancient Temples; Jerusalem was not known as Yerushalayim Habira (Jerusalem the Capital). When the second Temple was destroyed and the sages deferred its rebuilding and the resumption of its rituals to messianic times, there was no longer a compelling reason to live in Jerusalem. The small Orthodox community that continued to exist in Jerusalem considers Zionism a heresy and to this day does not recognize the religious or political legitimacy of the State of Israel.

The founders of the Zionist movement had little regard for the Messiah, and even less for Jerusalem. The notion of a rebuilt Temple in which the cult of animal sacrifices of the ancient Israelites would be renewed, the priesthood reestablished and the royal House of David restored (goals prayed for in Orthodox synagogues all over the world and today fanatically championed by the religious nationalist Temple Faithful followers who are funded by Israel’s government) was seen by them as an embarrassing anachronism. Israel’s first prime minister, David Ben-Gurion, granted the small ultra-Orthodox community in Israel certain privileges, like exemption from the military, because he was convinced that religious Jewry would not survive the new secular Zionist state.

But the exact reverse happened. Not only are the ultra-Orthodox groups thriving, and it is difficult for any coalition government to be formed without them, but the most reactionary political, cultural and religious forces have come to dominate the country’s life. While the overwhelming majority of the world’s Orthodox Jewry considered Zionism a heresy until World War II, after the Six Day War mainline Orthodox Jewry ascribed messianic meaning to the State of Israel, much as Evangelical Christianity does.

Ironically, the deepest hostility to Zionism is to be found today not in Arab countries, some of which now see Israel as an ally in their conflict with Iran, or even among certain anti-Semitic groups that now see Israel’s Zionism and its privileging of its Jewish citizens as a model for their white and Christian supremacism, but among some of the ultra-Orthodox groups in Israel and in the United States that recognize neither the religious nor the political legitimacy of the State of Israel, and therefore do not see Jerusalem as a capital of anything. They are still awaiting the Messiah.

The leaders of Western democracies have yet to end their shameful collaboration with this Israeli scam. Not that they ever believed it, but they needed to pretend that they do, for otherwise they would have had to explain why they urged the security council to impose sanctions on Russia for its land grab in the Ukraine but refused to impose sanctions on Israel for its land grabs in the West Bank and Jerusalem. This pretense was also what led President Obama to say in one of his speeches to the UN Annual Meeting of the General Assembly something that is outrageously untrue—that the UN is not the place to which Palestinians can bring their quest for self-determination and statehood because that can only be resolved in direct negotiations with Netanyahu. No one knew better than Obama that the UN was established exactly for that reason—to help populations under former colonial control achieve self-determination. And he surely also knew that the very last person Palestinians could receive a fair hearing from is Netanyahu.

It is true, as Trump’s defenders claim, that Israel has every right to determine the location of its capital without any outsider’s intervention—provided that location is within its own internationally recognized borders. No country has a right to grab territory outside its own borders, whether for its capital or a parking lot. So the issue is not the status of Jerusalem as a capital, but whether Jerusalem is within Israel’s borders. It is not. That is so because both the UN Security Council and the International Court of Justice (in its Wall Decision of 2004) ruled unanimously that territory beyond the pre-1967 Armistice line—which is where East Jerusalem is located—does not belong to Israel, and that changes in the pre-1967 Armistice line can only be made by agreement between the two contending parties.

There is an additional problem. While West Jerusalem is within Israel’s pre-1967 Armistice line, the UN’s Partition Plan of 1947 (which was cited by Israel’s Declaration of Independence as the source of Israel’s legitimacy) explicitly excludes Jerusalem from the territory assigned to these two states, declaring it to be a corpus separatum, a separate entity to be placed under international jurisdiction.

This provision was never implemented, but it served to deny both Israelis and Palestinians the right to claim sovereignty over the city. However, in the bilateral agreement known as the Roadmap for an Israel Palestine Peace Agreement of 2003, Israel and the Palestinians committed themselves to reach agreement on the future status of Jerusalem in the context of their negotiations for a two-state peace accord. The Road Map, endorsed by the Security Council and signed onto by the United States and the European Union, forbids unilateral changes in the pre-1967 line. In its Resolution 2334 of 2016, the Security Council condemned Israel’s “flagrant violations” of this agreement.

The real issue raised by Trump’s declaration—the status of Israel’s borders, and not the location of Israel’s capital—is determined by international law, not by Trump’s whims nor by Israel’s unilateral actions. Clearly, East Jerusalem is on the Palestinian side of the pre-1967 Armistice line, and therefore not within Israel’s internationally recognized borders. What Trump was therefore saying to the world is that, like Netanyahu, he gives not a fig for international law.

It is that disdain, and not anything else, that has utterly destroyed any possible basis for renewed peace talks. It would be madness for Abbas to resume negotiations that both Israel and the self-appointed mediator have publicly declared allow Israel to grab Palestinian territory. For what do the powerless Palestinians have going for them in these negotiations other than international law?

Israel’s contempt for international law is matched by its indifference to the deeply democratic ethos of its own founders. This was inevitable, perhaps, given the inherent contradiction between that democratic ethos and Israel’s dispossession of Palestinians even from that part of Palestine recognized by the UN Partition Plan as their legitimate patrimony. Yes, I know, Palestinians and Arab countries went to war to prevent the implementation of the Partition Plan. They did so not because Palestinians uniquely dislike partition plans, but because, like most people, including Jews, they dislike homelessness and disenfranchisement. Arguably, the expulsion of Palestinians from the areas assigned to the Jewish state would have happened even without the war started by Arab countries, for otherwise it would only have been a question of a short time before Israel’s Jewish population would have found itself a minority in its new state.