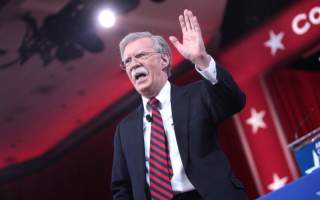 Drop your pens, everyone. The John Bolton sweepstakes are finally over and the winners are those of you who marked “private sector.” That’s where Bolton will be employed after months of our nation’s resources being marshaled in the service of finding him a job and following whispers that he could be Donald Trump’s secretary of state, then undersecretary of state, then national security advisor part two. I want to thank those of you who bet on those positions and all the others. We have a lovely parting gift for you on your way out.

Fittingly, Trump seems to have determined Bolton’s lack of fitness on the basis of style rather than substance. The president was reportedly discouraged because he didn’t like the former UN ambassador’s mustache. He also allegedly recoiled from Tennessee senator Bob Corker over his diminutive height. There’s some sense in these considerations, superficial though they are. The secretary of state is the president’s vanguard ambassador, the literal face of America abroad and—even in the age of Boris Johnson—a snappy presentation matters in foreign capitals.

Still, there’s a far better reason than facial hair to fence off John Bolton from the Trump administration: he’s a highly undiplomatic diplomat with a calamitous record of urging wars in situations where a bit of accord would have gone much further. Trump hasn’t exactly been Iran’s warmest friend, but our nuclear deal with Tehran is still intact and at State, Bolton would have played a role in maintaining it. How could he effectively do that after writing a 2015 op-ed for the New York Times titled “To Stop Iran’s Bomb, Bomb Iran?” And after seeming to advocate an Israeli nuclear strike against Iran? Can his judgment on foreign policy be trusted, given that he still defends the disastrous Iraq war and stumped for Muammar el-Qaddafi to be assassinated, a policy that nose-dived Libya into chaos? If nothing else, that’s very out of sync with Trump, who has pledged to stop these discredited wars.

So Bolton is out, but the question remains: given the availability of credible candidates, and given Bolton’s lack of symmetry with Trump, why did his name keep coming up as a contender? Part of the answer is that he was one of the few Washington foreign-policy hands who backed the president; a bigger part, I would suggest, had to do with ideology. Call them hawks or neoconservatives or what have you—they’ve manned the Republican foreign-policy apparatus since the Bush administration, and they’re now threatened with banishment by Trump, who repudiated many of their ideas during his campaign.

The Bolton sweepstakes was their way of trying to get one last foot in the door (as was the short-lived effort to get Elliott Abrams appointed to Foggy Bottom). Not long after the election, an extensive list of hawkish commentators started nudging Trump on Bolton, always citing his experience, rarely his policies. This culminated in a good word from Republican Senator Ted Cruz, the political opportunist whose presidential campaign acted as a sort of reunion tour for many GOP foreign-policy stalwarts. Cruz advocated Bolton for national security advisor because, he said, Bolton had “an understanding that we should be reluctant to use military force.” He has yet to endorse bombing New Zealand, for example. Alas, Cruz’s intervention wasn’t to be, perhaps in part because his fellow senator, Rand Paul, who has the president’s ear, urged Trump to leave Bolton out in the cold.

Instead, Trump elevated Rex Tillerson to state department secretary, James Mattis to defense secretary and H.R. McMaster to the national security advisor job. The trio make for an impressive A-team that, between its members, has already challenged European allies on their defense-spending lassitude, begun to overhaul the diplomatic bureaucracy and reasserted U.S. commitment to the NATO alliance while leaving space for reform. This seems to have defrayed hawkish nerves, with Bill Kristol tweeting out his pleasure over the McMaster appointment. Trump’s government now has the professionalism and ballast that it urgently needs, yet the neocons have to feel a bit adrift. Tillerson remains an advocate of polished Russian–American relations, after all, and the armed forces, personified in the cabinet by Mattis and McMaster, are as skeptical of elective war as they’ve ever been.

However Trump’s foreign policy ultimately shakes out, the lack of a hawkish ideas man in the cabinet is unique among recent Republican administrations. Remember the Office of Special Plans? The chop shop set up by Douglas Feith and Paul Wolfowitz in the Bush-era Pentagon for the purpose of providing the president with, shall we say, alternative intelligence? Don’t expect one of those in the Trump administration. And so the quest to find John Bolton another job continues. If Kelly Ripa is still looking for a co-host, may I make a recommendation?