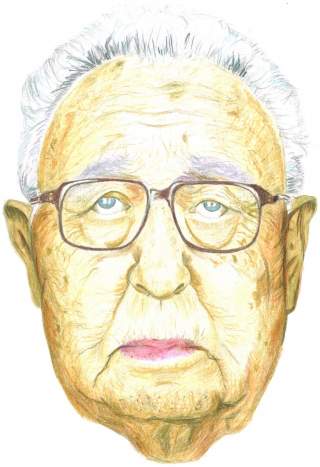 Heilbrunn: Another country that’s obviously taken a lead role in Europe is Germany—on Ukraine, on Greece—

Kissinger: They don’t really seek that role. The paradox is that seventy years after having defeated German claims to dominating Europe, the victors are now pleading, largely for economic reasons, with Germany to lead Europe. Germany can and should play an important role in the construction of European and international order. But it is not the ideal principal negotiating partner about the security of Europe on a border that is two hundred miles from Stalingrad. The United States has put forward no concept of its own except that Russia will one day join the world community by some automatic act of conversion. Germany’s role is significant, but an American contribution to Ukrainian diplomacy is essential to put the issue into a global context.

Heilbrunn: Is that absence a mistake, then?

Kissinger: If we treat Russia seriously as a great power, we need at an early stage to determine whether their concerns can be reconciled with our necessities. We should explore the possibilities of a status of nonmilitary grouping on the territory between Russia and the existing frontiers of NATO.

The West hesitates to take on the economic recovery of Greece; it’s surely not going to take on Ukraine as a unilateral project. So one should at least examine the possibility of some cooperation between the West and Russia in a militarily nonaligned Ukraine. The Ukraine crisis is turning into a tragedy because it is confusing the long-range interests of global order with the immediate need of restoring Ukrainian identity. I favor an independent Ukraine in its existing borders. I have advocated it from the start of the post-Soviet period. When you read now that Muslim units are fighting on behalf of Ukraine, then the sense of proportion has been lost.

Kissinger: To me, yes. It means that breaking Russia has become an objective; the long-range purpose should be to integrate it.

Heilbrunn: But we have witnessed a return, at least in Washington, DC, of neoconservatives and liberal hawks who are determined to break the back of the Russian government.

Kissinger: Until they face the consequences. The trouble with America’s wars since the end of the Second World War has been the failure to relate strategy to what is possible domestically. The five wars we’ve fought since the end of World War II were all started with great enthusiasm. But the hawks did not prevail at the end. At the end, they were in a minority. We should not engage in international conflicts if, at the beginning, we cannot describe an end, and if we’re not willing to sustain the effort needed to achieve that end.

Heilbrunn: But we seem to recapitulate this over and over again.

Kissinger: Because we refuse to learn from experience. Because it’s essentially done by an ahistorical people. In schools now, they don’t teach history anymore as a sequence of events. They deal with it in terms of themes without context.

Heilbrunn: So they’ve stripped it of all context.

Kissinger: Of what used to be context—they put it in an entirely new context.

Heilbrunn: The kind of book you wrote—your first book, for example—would never pass muster in political science today because it’s not filled with abstract theories. It actually tells a narrative lesson.

Kissinger: That’s why I get attacked from the left and the right—because I don’t fit either of their categories.

Heilbrunn: Speaking of history, what is your assessment of Germany’s role in Europe right now? Are we back to a new German problem, where southern Europe views them as an occupying power, and in Germany itself there are hints of nationalism—I wouldn’t say that it’s an efflorescence.

Kissinger: Well, there are hints. Some groups in Germany, in the group below fifty, sometimes act as if the country that once sought to shape Europe by force now claims the right to reshape it by absolute moral judgment. It’s unfair to tempt Germany into such a role. It’s easy domestic politics for the countries of southern Europe to blame the Germans rather than themselves. What is the German sin in Greece? The Germans are saying that what is put forward as a bailout perpetuates irresponsibility. They are seeking to define a responsible process of recovery. Considering that their history has made inflation such a nightmare to Germans, I have sympathy for their position. Germany has never in its national history starting in 1871 had to run an international system. From 1871 to 1890, Bismarck conducted a spectacular tour de force that was not sustainable. You can’t have a great policy if it requires a genius in every generation. But from 1890 to the end of the Second World War—nearly a century—Germany was embattled in its perception of the world around it. Britain and France have much more experience in multilateral diplomacy. So I have sympathy for the German dilemma. They can help, they may be decisive in helping, but they need a bigger, more global framework, which we need to contribute.

Heilbrunn: The Atlanticist generation in Germany and the approach it embodied have largely disappeared.

Heilbrunn: The younger CDU [Christian Democratic Union] politicians that I’ve met are not that interested in the United States, which is a dramatic shift, since the whole Adenauer policy was based on Westbindung.

Kissinger: It’s partly their fault and partly our fault.

Heilbrunn: I saw Robert McFarlane recently, who worked for you, and in the Reagan administration. He said to me, “The last strategic thinker as an American president was Richard Nixon.” Is that true?

Kissinger: I think that’s right. He had substantial strategic vision. At the end of the first volume of my memoirs, White House Years, I wrote that the question is: What would have happened if the establishment that Nixon both admired and feared had shown him some love? Would he have retreated further into the wilderness of his resentments, or would such an act have liberated him? I leave it open.

Heilbrunn: Do you trace many of the problems in American foreign policy back to Vietnam, to that shattering of foreign-policy consensus?

Kissinger: I think Vietnam was the pretext. It made the protest legitimate. Because after all, you had student demonstrations in the Netherlands, which had no Vietnam, and in France.

Heilbrunn: Nixon was clearly somebody who had a tremendous amount of foreign-policy experience before he became president in 1969.

Kissinger: And he was thoughtful, and his psychological attitude made him unwilling to deal with too many people, so he had to think and read—he couldn’t push a button and get a Google answer—and travel. He was not threatened personally when he traveled abroad, so he was at ease in many conversations with foreign leaders. For all of these reasons, he thought deeply about foreign affairs.

Heilbrunn: He must have learned a lot from Eisenhower, too, I assume.

Kissinger: Well, like everything with Nixon, it was always a good combination of resentment and admiration, so nothing was ever unambiguous.

Kissinger: Well, on the prudential level he’s a realist. But his vision is more ideological than strategic.