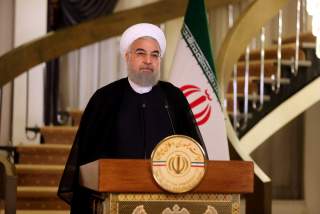 President Donald Trump’s new Iran strategy marked an important strategic shift in the United States’ policy toward that country. The new measures proposed by the President, if fully implemented, will contain and decrease the Islamic Republic’s threat to U.S. interests in the region, including its allies, strategic partners and waterways crucial to global energy security.

To fully implement these new measures and reach their respective objectives, the United States must avoid losing sight of the Iranian regime’s key objectives and priorities. Further, a successful U.S.-Iran strategy must include close talks and deeper cooperation with its European allies, Israel, Iran’s Arab neighbors and even Russia.

The key concerns that President Trump aimed to address in his new Iran strategy include the Sunset Clause of the Joint Comprehensive Plan of Action (JCPOA), Iran’s intercontinental ballistic missile program, and the Iranian support for terrorism and destabilizing regional activities through the infamous Islamic Revolutionary Guard Corps (IRGC). Although the nuclear deal reached under former President Barack Obama—negotiated with the goal of imposing international oversight on Iran’s nuclear activities and limiting Iran’s nuclear development for the next twenty years—was achieved to a certain extent, the deal stops short of being a full and comprehensive solution to both Iran’s nuclear ambitions, and it’s expanding regional influence. President Trump’s strategy would address some of the most pressing flaws in the JCPOA while simultaneously curbing Iranian Imperialism in the region.

Iran’s first and foremost priority is preserving the regime. By far the biggest threat to its survival are the Iranian people. The regime has tried to neutralize the domestic threat to its survival through a range of different actions. One example is its use of brute force in such cases as the violent crackdown on the 2009 Green Revolution protests. It has also used a massive propaganda campaign that portrays the regime’s survival as the crucial element to preserving Iran’s territorial integrity and shielding it from terrorist networks like ISIS.

Additionally, the regime recognizes that a strong and growing economy is crucial to domestic stability and thus its existence. It can be argued that the massive 2009 Green Revolution protests against then President Mahmound Ahmadinejad’s victory were the manifestation of the people’s contempt for his foreign policy, which had crushed the Iranian economy under effective international sanctions.

President Hassan Rouhani, both during his campaign and after, focused his attention on lifting sanctions and improving the economy. This move by President Rouhani could not have been possible without the approval of the Supreme Leader and the regime’s elite ruling class. What caused the approval for Rouhani’s initiative to engage the West and work to lift the sanctions was the regime’s assessment of the threat that a weakened economy posed to its survival.

Further, a weakened economy would make it significantly more difficult for Iran to support its regional proxies, thus limiting the effectiveness of a network that the regime relies on to deter foreign attempts to regime change. President Obama’s 2015 nuclear deal failed to consider this broader Iranian problem, and through major sanctions reliefs and financial concessions the Obama administration provided a lifeline to the Islamic Republic’s regime.

One major concern regarding the nuclear deal is the so-called Sunset Clause, which lifts limitations on Iran’s nuclear program in twenty years. Although twenty years seems a long time, the threat that the lift of these nuclear limitations poses to regional and global security is real and kicking the problem down the road only makes dealing with it more difficult. If the United States fails to address this problem now, then in twenty years it will certainly be more difficult to address it.

As stated in numerous policy papers crafted by regime institutions, Iran aims to use this period to rapidly increase its economic ties with Europe so that the pressure of future sanctions on Iran would negatively affect those European countries with whom Iran aims to strengthen bilateral economic and diplomatic ties. Going beyond the economy, since the signing of the nuclear deal, Iran has faced little restraint in expanding its regional influence through its proxies. The Iranian regime’s support for these proxies and its regional influence will continue for years to come unless the United States takes concrete actions to stop them. Such expanded regional influence, and a network of well-funded and heavily armed proxies, will make it extremely tough for the United States to use military options against Iran if they choose to pursue an aggressive nuclear program by the end of the twenty-year period.

The Iranian regime aims to use the divide between Europe and the U.S. following President Trump’s election to its benefit. Since the 1979 Islamic Revolution, Europe has generally been on better terms with Iran than the United States. Despite the United States, many European countries have extensive diplomatic and financial relations with Iran. Following the JCPOA, these relations are growing, and both Europe and Iran have shown great interest in deepening these relations. In the light of Mr. Trump’s new Iran strategy, he must engage in a series of bilateral talks with key European allies including France, Germany and the U.K. to develop a tougher, more coordinated approach toward Iran.

The United States and Europe must not let Iran use the divide between the Western allies to further its objectives. President Trump should remind European allies of the threats that Iran poses to European stability. The United States also remind Europe of the Iranian role in Iraq and Syria, given how Iran’s significant contribution to the chaos helped resulted in the refugee crisis that has caused major social and political problems in various European countries. The United States should also remind Europe of Iran’s support for terror proxies across the region and the dangers of Iran’s further development of its intercontinental ballistic missile (ICBM) program.

The president’s decision to impose sanctions on the IRGC is a welcomed move. Since its foundation following the early months after the 1979 revolution, the IRGC has established extensive ties with regional and international terror networks. The IRGC’s supply of arms, money and training has created numerous proxy forces in the region that take orders directly from Tehran. These proxy forces have repeatedly attacked Israel and U.S. forces in Iraq and Afghanistan, resulting in the loss of hundreds of American lives. Through the IRGC, the Iranian regime controls an extensive terror network in the region that works in direct opposition to American interests in Iraq, Syria, Yemen, Lebanon and beyond.

Therefore, when Treasury Secretary Steve Mnuchin announced new sanctions on the IRGC, he remarked that the IRGC “played a central role to Iran becoming the world's foremost state sponsor of terror.” To make matters worse, the expanding and problematic Iranian intercontinental ballistic missile system is also developed by the IRGC. Pressuring the IRGC is a key component to any U.S. strategy toward the Middle East that aims to secure peace and stability.

While implementing this new Iran strategy, the United States needs to initiate a major public diplomacy campaign in the Middle East and Europe. In the Middle East, the U.S. should reassure its commitment to its allies and partners, and establish itself as a strong alternative for security in Iraq in the absence of the Iranian forces. In Iran, the U.S. should reassure the Iranian people that it respects Iran’s territorial integrity and does not seek to dissolve the country. Further, the United States should continue to clearly make a distinction between the Islamic Republic’s regime and the people of Iran. In Europe, the United States should make it clear that Iran is a shared threat not only to American interests but also to those of its European allies.

The Trump administration and Congress must also be sure to coordinate extensively on addressing the greatest flaws of the JCPOA. Congress has already begun drafting legislation that will amend the Iran Nuclear Review Act of 2015, due to President Trump’s refusal to certify Iran’s compliance with the JCPOA. The new legislation would strengthen enforcement, prevent Iran from developing ICBMs and make all restrictions on Iran’s nuclear activity permanent under U.S. law.

If Congress fails to amend this legislation in sixty days, the president has threatened to terminate the JCPOA altogether. The terms of the JCPOA must be tougher, especially the sunset clauses. The Millennial Policy Center is particularly concerned with these clauses and the “kicking the can down the road” mentality, since it will be our generation that would have to deal with a nuclear-armed Iran, should the terms fail.

Secretary of State Rex Tillerson has spoken of a possible “successor deal” that will address the weaker terms of the deal. The United States should work exhaustively with its European allies, Sunni Arab allies, Israel, Russia and China on this successor deal and ensure it addresses all the major flaws of the JCPOA, Iran’s missile system and their continued funding of terror throughout the world.

Ulysses Kamrani is a Foreign Affairs Fellow at the Millennial Policy Center based in Denver, Colorado.