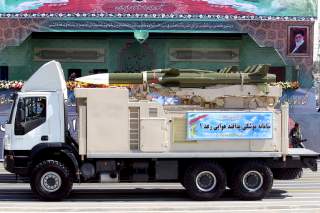 When President Donald Trump certified Iran’s compliance with the nuclear agreement earlier this month, the decision came with a potent amount of anger and resignation. It became abundantly clear almost immediately that Trump didn’t want to provide Tehran with another reprieve, despite the fact that his national security advisers were unanimous in their recommendation to do so. According to a behind-the-scenes look courtesy of the New York Times, Trump spent nearly an hour badgering his aides on why he didn’t believe that Iran was meeting its end of the bargain; he was so distressed about the decision that he forced the State Department to cancel a news conference that was scheduled for later in the day, and only agreed to send a certification over to Congress pending certain conditions (like more sanctions on other aspects of Iran’s non-nuclear behavior) were attached.

Nearly two weeks after that critical day, Trump remains incredibly unnerved with the Joint Comprehensive Plan of Action, an agreement that he lambasted during the presidential campaign as woefully insufficient to the task ending Iran’s nuclear program. Blasting the accord as the worst he has ever seen in his five decades of being a dealmaker was a big applause line during his rallies and a savory item that his political base could eat up. Trump’s outlook hasn't changed since becoming president of the United States. Speaking to the Wall Street Journal in the Oval Office this week, he all but determined outright that it’s highly unlikely he will continue certifying Tehran’s compliance when the next deadline hits the calendar in October. “We’ve been extremely nice to them in saying they were compliant,” Mr. Trump said during the interview “Personally, I have great respect for my people, but if it was up to me, I would have had them noncompliant 180 days ago.”

There is perhaps no other foreign policy issue on the president’s docket right now that is as despised across the administration than the JCPOA. Indeed, that disdain is felt within a significant cross-section of Washington’s think-tank community, many of which continue to feel burned by the fact that they lost the big fight in the summer of 2015 when Congress was unable to block the agreement from coming into effect. There are many people in Washington today who would rejoice if Trump no longer certified that Tehran was cooperating with the IAEA or fulfilling its obligations, and much of that sentiment is shared on Capitol Hill as well.

But it would be the definition of irresponsible for President Trump to cater to these people and let emotion dictate the decisions he makes on the JCPOA—not only because it goes against the facts of what it really happening (the U.S. intelligence community and the IAEA have both concluded that Iran’s nuclear capability is being kept in check and that Tehran’s nuclear breakout remains roughly a year away), but because a noncertification would open a Pandora’s Box that the United States and the Middle East region doesn’t need right now.

If the White House is confident that America’s allies in Europe will go along with a decertification or that the Iranians would meekly take it on the chin without a response, it is vastly underestimating how big of a deal this kind of choice would be. America’s European allies would view a decertification as a unilateral pulling of the carpet underneath their feet, and one that is completely unjustified and unsupported by the evidence.

It’s often lost in the conversation that while the JCPOA is an imperfect agreement with an imperfect track record of implementation, it is the only roadblock standing in between Iran and a nuclear weapons capability that would lit the fuse of two disturbing realities: a nuclear arms race in the Middle East, or an armed confrontation against Iran that the region can ill afford. Tehran’s stockpile of uranium enrichment, the quality of its enriched uranium, the number of centrifuges Iranian scientists are permitted to spin, and the quality of centrifuges that Iran can operate are all capped under an inspection and monitoring regime that the international community has never had on Iranian soil before. Ayatollah Ali Khamenei and Iranian President Hassan Rouhani aren’t doing all of this on their own free will (the JCPOA is about as controversial in Tehran as it is in Washington) but rather because failing to do so means a snap-back of a global sanctions regime that previously grounded the Iranian economy to a halt and rose inflation into the high double-digits. There isn’t any mystery about where Iran’s nuclear program would be in the absence of a JCPOA or JCPOA-like agreement: it would be unrestricted and months if not weeks away from nuclear breakout.

If the administration had a decent alternative it could work with, then decertifying Iran’s compliance would be less of a danger. If, for instance, the United States could convince the Iranians, the European Union, China, and Russia to sit down in Geneva again and renegotiate, at least there would be some logic behind the decision. But Iranian officials have made it clear during the last two years that they will not renegotiate anything. The Europeans are perfectly content with the current arrangement, which after all is working and has defied the doomsday scenarios that the JCPOA’s opponents predicted years earlier. If the United States pulled out, it would be left alone, criticized by allies and adversaries alike killing the world’s most important nonproliferation agreement since the Cold War. And, to put the icing on top of the cake, the United States wouldn’t be able to rely on actual facts as the basis for its unilateral withdrawal.

Iran hawks may not like to admit this, but the JCPOA is the best outcome we are going to get with an Iranian government that needed to spend every morsel of its political capital to sit down with Western powers and curb a nuclear program that Tehran spent tens of billions of dollars developing. If the president believes that Tehran would come back to the negotiating table after such a public slap in the face, he will soon realize that he miscalculated to the benefit of no one.

The JCPOA is a temporary bump in the road in Iran’s nuclear journey. In the world of nuclear proliferation, a ten to fifteen year restriction on enrichment activities is not a long period of time. But surely ten to fifteen years is much better than having to deal with a nuclear-armed Iran immediately. If President Trump doesn’t want to be the American president who helped poke Iran into the nuclear club, he should restrain his emotions, forget about his political base, and defer to the national security professionals advising him to keep the nuclear agreement alive.

Image: A military truck carrying a Raad missile drives past a picture of Iran's Supreme Leader Ayatollah Ali Khamenei (R) during a parade marking the anniversary of the Iran-Iraq war (1980-88), in Tehran September 22, 2015.